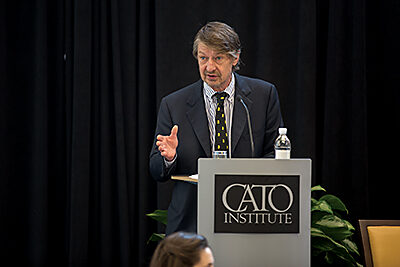 Good things are made by free individuals, in free association with other individuals. (Notice that’s how we make babies.) Individual freedom is about bringing things together; politics is about dividing things up. Political elites would have us making babies by putting the woman over on this side of the room and putting the man on that side of the room while the elites stand in the middle taxing sperm and eggs.

Goodness itself is an individual trait. Think about the death of Socrates. What do you suppose would have happened to that charming old bloke, that loveable eccentric full of questions, if Socrates had gone around Athens and asked each individual Athenian, “Should I be condemned to death?” Individuals would never have killed Socrates. They had to become a mob first. And what always comes to the fore in a mob? Mobsters. The alternative right in KKK bed sheets or, less comically, Marine Le Pen, or the likes of Vladimir Putin or Xi Jinping — or the worst possible example: that murderous president of the Philippines, Rodrigo Duterte. (The citizens of the Philippines were so overwhelmed with their populist fear of violent crime that they ended up giving themselves a dose of quack political homeopathy and elected a violent criminal president.) And here at home, we have that Cosa Nostra with its code of omertà, the Clinton Foundation. Or the “Feel the Bernies” expressing their First Amendment rights by smashing windows on K Street, and the Make America Great Again Crips and Bloods wearing their colors on their baseball caps.

The libertarian is the anti-mob. The anti-mob is you, each of you.

I want to give you just one example of what you, the individual, can achieve, and indeed did achieve. It was something that political elites all around the world were unable to achieve for thousands of years. All the way through the known existence of man, they were unable to abolish slavery. And the abolition of slavery was a matter of individual private enterprise, private social enterprise.

The abolition movement was founded in Great Britain in the 18th century by the Quakers. Now, the Quakers were not political elites, and the Quakers had very little political influence — partly that was because of their silly hats, but mostly because Quakers, as religious dissenters, were not eligible to stand for parliament. And once this abolition movement was founded, it drew its strongest support from individuals who were anything but elites. Abolition drew its strongest support from the Industrial Revolution’s new working class — women and factory workers. They had no political influence whatsoever. The right to vote in Britain was limited to people with money and knee breeches, and yet abolition prevailed. Not only were all the slaves in the British Empire freed in 1833, but also, at the behest of the abolition movement, the British Navy would go on to fight the slave trade everywhere else in the world.

All because of private social enterprise engaged in by individuals in Quaker meetings, in community organizations, through the work of clubs and lodges and fellowships — much like saying “my bowling league cured Zika.” Well, it could be done if we could get more research scientists to learn to bowl. Or let the Cato Institute be your bowling league, now more than ever.