ON THE IMPORTANCE OF CATO
One of our problems as Republicans in Washington is that Republicans have an insufficient confidence in free minds and free markets. When we’re offering them Obamacare, but half as much, you’re never going to win that debate. If the Democrats are Santa Claus, and we’re 0.5 Santa Claus, do you think we’re going to win that? We have to do something that is more difficult — and that’s why you need Cato and think tanks to come up with the arguments, because inherently our argument is more difficult. We have to be able to argue about opportunity, freedom, and the prosperity that that brings. 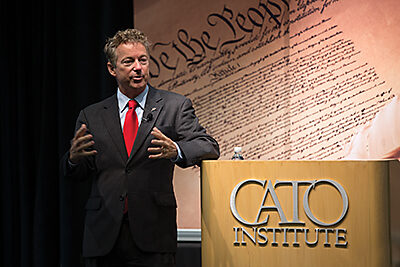 ON PRIVACY AND FOREIGN POLICY
On privacy and foreign policy, I think Cato has a perspective that most other think tanks in town don’t have, and if you weren’t here wouldn’t be represented. I think it’s important that we have voices that will discuss a constitutional foreign policy, and that there needs to be debate before we go to war. In fact, I think the most important debate we ever have is whether we send our kids to war — and we’re not having it at all. What is the legal and constitutional justification for our presence over there now? I think it’s zero. If you think we should be there, we should vote. We shouldn’t just let a president — one person — have so much power.

ON COMPROMISE
One of the things that we hear in politics is that once upon a time, things were so much better. The halcyon days when politicians would hold hands, sing “Kumbaya,” and everything was perfect, there was no disharmony at all — if only we had those times again! And I always wonder if these people have read any of our history.

Because when you go back and read of the fights between Jefferson and Adams, they had a 30-, 40-year feud, with heated disputes. You look at Henry Clay from my state — he became Speaker of the House in his first election, 34 years old, and he gets there and there’s mayhem, people have derringers that slide down from their shirt sleeves, people have canes and they know how to wield them.

We’re being asked to repeal certain segments of it, leave certain segments in place, but then replace them with things that to me look a lot like Obamacare. We will have in place, if the Republicans get their way, the same basic principle the Democrats had, which is that the government will pay money to insurance companies. And the problem I have with that is that insurance companies don’t really need taxpayer money.

They make $15 billion a year, and they made $6 billion a year before Obamacare. Who here wouldn’t love to have a business where the government forces people to buy your product, and then if 10 percent of them can’t afford it, then the government will buy it for them — but you still get to keep all the profits?