What role does Cato play in the public policy landscape? At the 40th Anniversary Celebration, Director of the Office of Management and Budget Mick Mulvaney and Cato’s chairman of the board of directors Bob Levy offered some thoughts on Cato’s importance and impact. 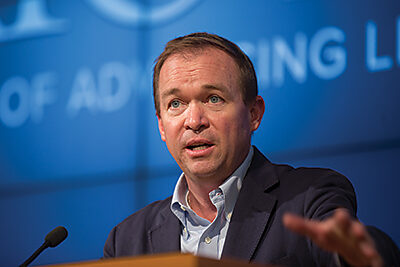 Mick Mulvaney: I want to tell you one of my favorite Cato stories — it’s a story that shows just how influential Cato can be, in ways that you don’t even know. I met John Allison when I was 25 years old. I was a young lawyer on my very first deposition. I went to the middle of nowhere in eastern North Carolina, and there I met John Allison. In the middle of the deposition we took a break for lunch and he came back early and we were just chatting, waiting for the court reporter to come back. And he asked me, “So son, where are you from?” I told him, “I’m from Charlotte.” He asked where I went to school, and I told him I went to Chapel Hill for law school. Then he asked, “What’s your favorite book?” And I said, “Well, when I was in eighth grade my dad gave me a copy of Atlas Shrugged, and I thought it was really cool.” That’s the right thing to say to John Allison, apparently, and I sort of followed his career from afar after that.

When I got to Congress, he had just become president of Cato, and I invited him to dinner at the Capitol Hill Club with a couple of friends of mine, including Rep. David Schweikert (R-AZ), who was on the Financial Services Committee with me. We were talking about Dodd-Frank, and I asked him if he thought we would ever get rid of it. And he said, “No, not really.” I said, “Well, that’s kind of depressing. What should we do then?” And he said, “Well, we should beat it with competition. We should set up a Dodd-Frank world, and then an alternative avenue. If you wanted to operate with a fairly low level of capital, and thus a relatively high level of risk, you would operate in the Dodd-Frank world, but if you wanted a more conservatively run financial institution with a higher level of capital and thus more safety and security, we would create a different lane for you with a different level of government oversight and regulatory burden.” The theory was that if Dodd-Frank was in fact designed to make banks safer, there was another way to do that, and that was simply to have banks carry more capital.

That was a dinner conversation! I think the House Financial Services Committee voted on that last week. And you all don’t get credit for it, but the CHOICE Act that Jeb Hensarling has been pushing for the last two years actually grew out of a conversation that Cato had. There are ways that you all influence policy in this country that you don’t even realize. 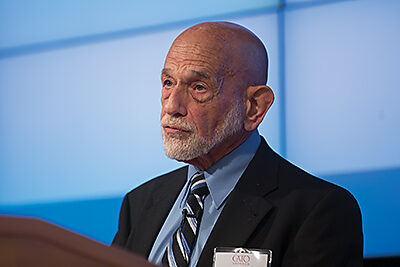 BOB LEVY: In the Global Go To Think Tank Index from the University of Pennsylvania, 2016 edition, Cato is 11th among 6,846 think tanks worldwide; 8th in the United States; 4th in domestic policy; 5th in education policy; 6th in health policy; 8th in social policy; 10th in advocacy; 10th in use of media; 6th in innovative ideas; and 10th for impact. Bear in mind — those numbers are out of 6,846. Or, you could look at the comprehensive ranking of think tanks by the Center for Global Development — it’s based on objective performance measures, including use of social media, web traffic, press references, scholarly citations — and Cato was first overall in rating per dollar spent. And equally impressive, we were second overall even without adjustment for the size of our budget — even when compared to much larger think tanks such as RAND and the Urban Institute.

Now, you might say that Cato’s think tank ratings sound good, but we know that 82.6 percent of statistics like that are made up on the spot. What about Cato’s actual impact on public policy? Well, we don’t gauge our impact by who gets elected or the number of laws passed — in fact, generally we’re pushing Congress not to pass a law. Instead we emphasize books and studies and opeds and radio and TV appearances, our award-winning websites, lectures, debates, legal briefs, testimony before Congress and state legislatures. And based on those criteria we’ve had a major impact on public policy in quite a few areas, both broad and specific. Our most important and broadest impact has been to create a presence for libertarian ideas in Washington, D.C. Without Cato, there would be no wholly consistent voice on behalf of individual liberty and limited government. And thanks to our work, journalists and policymakers understand that the ideas of the American Revolution are alive today.