The Cato Institute celebrated its 40th anniversary on the first weekend of May with Sponsors, friends of the Institute, and intellectual leaders in the liberty movement from around the world. The entire event took place at Cato’s headquarters in Washington, D.C. On Saturday night, 700 people attended the Institute’s 40 Years of Advancing Liberty party, taking up five of the Institute’s eight floors. 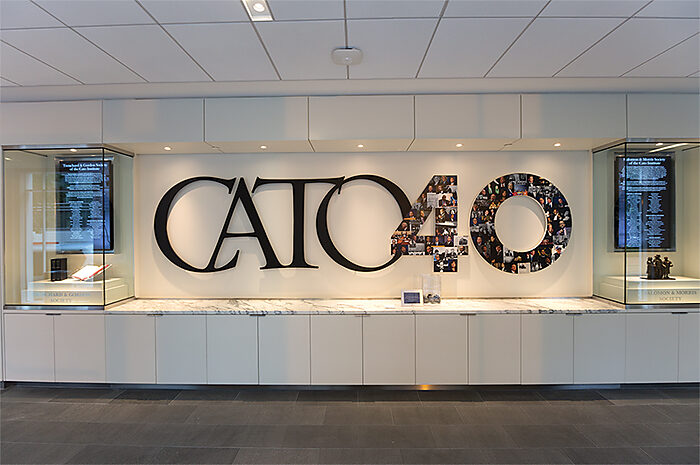 The Cato40 logo, featuring a collage of pictures from Cato’s history, on display in Cato’s lobby. A guide to the pictures in the collage can be found on this issue’s main page.

The weekend opened Friday morning with a panel discussion on the history of the Cato Institute. Executive Vice President David Boaz reminisced about the early days of the Institute. (When Cato moved to Washington, D.C., he recalled, the staff operated out of a small one‐​bedroom apartment on Capitol Hill while waiting for their new building to be ready.) At the time, prospects for liberty seemed grim: communism controlled half the world, stagflation and the Vietnam War were underway, and there was little public knowledge of libertarian ideas. The panel discussion is available online as a Cato Daily Podcast.

Since those early days when Cato’s staff fit into a living room, Cato has grown into an influential think tank whose research and commentary engage millions of people. And despite continued challenges to liberty, the world has seen incredible progress as libertarian ideas have become more mainstream throughout the world.

The weekend featured a wide variety of panels and speakers, including Pulitzer Prize winners George F. Will and Dave Barry, Sen. Rand Paul (R‑KY), political satirist P. J. O’Rourke, Director of the Office of Management and Budget Mick Mulvaney, author Charles Murray, and many others. Speakers discussed not only what Cato has managed to accomplish in its 40 years, but also how to confront new threats and challenges to the future of liberty. Highlights from some of those discussions are on the following pages.

Throughout the weekend, speakers emphasized the unique role that Cato has played in laying the intellectual groundwork for the advancement of libertarian ideas. At the beginning of his speech (which is featured in the Summer 2017 Cato’s Letter), George Will deemed Cato the “crown jewel” of the free‐​market intellectual movement that began organizing in the 1960s. As Cato’s chairman of the board of directors Bob Levy declared, “Without Cato, there would be no wholly consistent voice on behalf of individual liberty and limited government.”