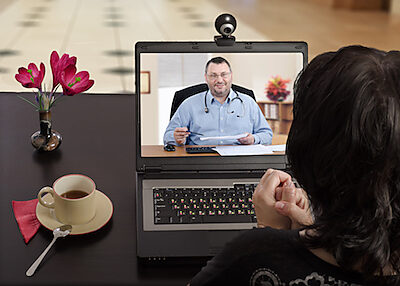 Your Doctor is on the Line

Telemedicine has the potential to revolutionize the medical field, providing a low‐​cost, efficient way for doctors to counsel their patients. But currently, physicians are required to obtain licenses from each state in which their current or potential patients are, or may be, located. In “Liberating Telemedicine: Options to Eliminate the State‐​Licensing Roadblock” (Policy Analysis no. 826), Cato adjunct scholar Shirley V. Svorny outlines several ways that Congress could alleviate this barrier through legislation — by eliminating government licensing of medical professionals entirely, for example, or by redefining the location of the interaction between patients and physicians from that of the patient to that of the physician. Congress could also allow states to open their markets to physicians licensed in other states, or to join other states in agreements to honor each other’s licenses.

CENSORING THE INTERNET
Large tech companies such as Google, Twitter, and Facebook have historically protected free speech online, but new threats from European regulators are pressuring these companies to censor speech that governments report as “hate speech” or even “fake news.” In “What to Do about the Emerging Threat of Censorship Creep on the Internet” (Policy Analysis no. 828), Danielle Keats Citron of the University of Maryland School of Law discusses how tech companies should resist censorship and hold government regulators accountable.

TO CATCH A CORRUPTION RING
Brazil is in the midst of a corruption scandal involving hundreds of businesspeople and politicians who have been investigated and prosecuted for taking part in a massive bribery scheme involving state‐​owned companies. In “Corruption and the Rule of Law: How Brazil Strengthened Its Legal System” (Policy Analysis no. 827), Brazilian lawyer Geanluca Lorenzon discusses how reforms to the incentive structure of Brazil’s legal system, including introducing judicial oversight and a merit‐​based selection system for judges and prosecutors, made this widespread reckoning possible after years of corruption.

A SAFE JOINT
Although recent years have seen a dramatic shift in public attitudes toward marijuana legalization, many people are still wary when it’s in their backyard — 44 percent of Americans say they would be somewhat or very concerned if a “store that sold medical marijuana” opened in their area. Many are particularly concerned that dispensaries attract crime. In “Going to Pot? The Impact of Dispensary Closures on Crime” (Research Briefs in Economic Policy no. 90), Tom Chang of the University of Southern California and Mireille Jacobson of the University of California–Irvine find that closing dispensaries in fact increases, rather than decreases, local crime.

FAKE NEWS ON FAKE NEWS
Many blame social media for recent increases in political polarization and believe that “fake news” on the internet helped secure the election for Donald Trump. But in “The Internet, Political Polarization, and the 2016 Election” (Research Briefs in Economic Policy no. 88), Levi Boxell and Matthew Gentzkow of Stanford University, along with Jesse Shapiro of Brown University, find that, in fact, political polarization has increased twice as much in the past 20 years among those 65 and older than it has among young people — despite the fact that older people use social media at a third of the rate of young adults. Similarly, they find that Trump did as well as — or better than — previous Republicans among people with low internet use and as well as or worse among those with high internet use.

ABUSE AT THE BORDER
In its plans to dramatically ramp up surveillance at the U.S. border, the Trump administration wants to hire 5,000 more Border Patrol agents and fill roughly 1,500 job vacancies, in addition to its current 20,000 agents. In “Border Patrol Termination Rates: Discipline and Performance Problems Signal Need for Reform” (Policy Analysis no. 825), Cato’s Alex Nowrasteh examines data that reveal that Border Patrol agents are significantly more likely to be fired for discipline or performance reasons than officers in other large federal law enforcement agencies. “Congress should seek to remedy these serious personnel problems in the federal government’s largest law enforcement agency before hiring new agents or further lowering hiring standards,” he writes.

CHINA TAKES THE HELM
China is showing increasing interest in playing a more prominent role in advancing trade in the Asia‐​Pacific region — and some Americans worry that Beijing’s rise would come at the expense of American interest. But in “Responsible Stakeholders: Why the United States Should Welcome China’s Economic Leadership” (Policy Analysis no. 821) Cato policy analyst Colin Grabow argues that the United States would only benefit from Chinese investment in free trade and local infrastructure and connectivity, which would boost trade worldwide.

CONFRONTING IRAN
In “Unforced Error: The Risks of Confrontation with Iran” (Policy Analysis no. 822), Cato’s Emma Ashford and John Glaser evaluate the costs of four of the Trump administration’s most likely policy options in adopting a more aggressive strategy toward Iran: sanctions, regional hostilities, “regime change from within,” and direct military action. They conclude that all these options are either dangerous or unlikely to have an effect.

THE END OF TRANSIT?
In “The Coming Transit Apocalypse” (Policy Analysis no. 824), Cato’s Randal O’Toole predicts that low energy prices, maintenance backlogs, unfunded pension and health care obligations, and the rapid growth of ride‐​sharing services such as Uber will put public transit out of business within decades. O’Toole argues that transit services should not continue to receive massive subsidies to build and maintain transit routes — instead, they should begin phasing out trains with buses, settling their debts, and targeting subsidies only to low‐​income people.

FREE SPEECH IN AMERICA
In a sweeping new Survey Report, “The State of Free Speech and Tolerance in America,” Cato’s Emily Ekins delves into American opinions on a wide range of issues involving free speech and tolerance — including who suffers the most from political correctness, what counts as a microaggression, who should be regulating Halloween costumes, perceived media bias, and what ideas people think should get an employee fired.

THE FAILED MEDICAL LOSS RATIO (MLR)
Part of Obamacare’s efforts to lower the cost of health insurance included instating minimum requirements on the share of premiums, known as the Medical Loss Ratio (MLR), that insurers must spend on medical claims. In “Cost of Service Regulation in U.S. Health Care: Minimum Medical Loss Ratios” (Research Briefs in Economic Policy no. 86), Steve Cicala of the University of Chicago, Ethan M. J. Lieber of the University of Notre Dame, and Victoria Marone of Northwestern University find that minimum MLR requirements encouraged higher costs, not lower, and failed to lower premiums in either the individual or group markets.

AN APPLE A DAY?
It’s generally taken for granted that increased access to preventive care would improve outcomes for common diseases such as diabetes. But in “Is Preventive Care Worth the Cost? Evidence from Mandatory Checkups in Japan” (Research Briefs in Economic Policy no. 87), Toshiaki Iizuka and Katsuhiko Nishiyama of the University of Tokyo, Brian Chen of the University of South Carolina, and Karen Eggleston of Stanford University review surprising evidence from Japan, where annual health checkups are mandatory. They study individuals who are diagnosed at the threshold of risk for diabetes mellitus. Ultimately, they find “no evidence that individuals improve their health‐​related behaviors.” Even an increase in the use of medical care after diagnosis did not significantly improve health outcomes.

POLICY UNCERTAINTY ABROAD
In “Policy Uncertainty in Japan” (Research Briefs in Economic Policy no. 89) Elif C. Arbatli, Naoko Miake, and Ikuo Saito of the International Monetary Fund, Steven J. Davis of the Hoover Institution, and Arata Ito of the Research Institute of Economy, Trade and Industry find that economic policy uncertainty appears to be tied to Japan’s sluggish growth over the past two decades.