Born in the Qazvin Province of Iran in 1960, Akbar Ganji is a celebrated journalist, an outspoken critic of the Iranian government, and a political dissident whose commitment to liberty and human rights is recognized world wide. Ganji was raised in southern Tehran in a devout and poor family household and became active in the Islamist movement against the Shah. He participated in the Iranian Revolution of 1979 and later joined the Islamic Revolutionary Guard during the harsh Iran-Iraq war. He later served as a cultural and press staff member at the Iranian embassy in Turkey and then with Iran's Ministry of Intelligence and National Security.

As his involvement with the regime deepened, Ganji grew increasingly disenchanted with the direction and character of the Islamic government. As a result, in the mid 1990's he moved energetically into investigative journalism and was soon publishing articles about excesses in the President Ali Akbar Hashemi Rafsanjani's regime in reformist and pro-democracy newspapers, many of which were eventually shut down by the government. 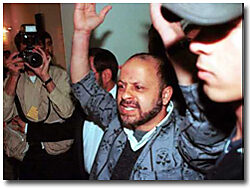 Ganji's commitment to exposing government corruption and excesses reached a critical juncture in 1999 with the publication of his articles in the leading newspaper Sobh-e Emrooz [Today's Morning] on the 1998 murders of five writers and dissidents. Ganji's articles on what became known as the Chain Murders of Iran revealed many previously secret aspects of the killings, exposed the involvement of then President Rafsanjani and leading members of the clergy in the murders, and implicated senior officials in the Ministry of Intelligence and other security agencies in their commission.

This remarkable series of articles was published as a book, The Dungeon of Ghosts, and rapidly became a bestseller. The book was credited with helping to defeat many conservative candidates in the February 2000 parliamentary elections and played a significant role in bringing about the election of a number of pro-reform candidates. It also provoked hard-liners and placed Ganji in a position of great vulnerability.

Retribution came swiftly. Ganji was arrested in April 2000, upon returning to Iran from a conference in Berlin titled "Iran after the Election." He was accused of having "damaged national security" and of having participated in a conference deemed "anti-Islamic" and "anti-revolutionary." Ganji was sentenced in January 2001 to ten years in prison, to be followed by five years of internal exile.

Ganji was sent to the notorious Evin prison in Tehran. Though his original sentence was reduced on appeal he was sentenced to another six years in prison on charges brought against him for articles he had written prior to 2000 and for having copies of foreign newspapers in his possession. He was sentenced for "collecting confidential information harmful to national security and spreading propaganda against the Islamic system."

Ganji was placed in solitary confinement, but he continued to write. His letters were smuggled from prison. They denounced authoritarianism and demanded the protection of basic human rights. In 2002 Ganji wrote a six-chapter Republican Manifesto, which laid out the contours of a true democracy for Iran and called for the boycott of all elections in the Islamic Republic.

Ganji went on a hunger strike for more than 80 days in mid-2005, which drew international attention to Iranian human rights abuses. In one letter smuggled from prison — "Letter to the Free People of the World" — he stated that "If need be, I will continue my hunger strike until death. Today, my gaunt face unmasks the Islamic Republic. I have become a symbol of justice in the face of tyranny, my emaciated body exposing the contradictions of a government where justice and tyranny have been reversed."

In late May, 2005, Ganji was granted a 12-day leave ahead of the presidential elections, which were to be held in early June. Ganji used his leave to participate in interviews with news agencies in which he criticized Ayatollah Ali Khameni, the "supreme leader" of Iran, and asked for his office to be put to a public vote. The authorities called for his arrest for "illegal interviews," and Ganji turned himself in. He resumed his hunger strike in solitary confinement on June 11, 2005.

Many Iranians were unaware because of censorship of Ganji's hunger strike, but his strike drew a worldwide response. Hundreds of prominent human rights activists, academics, writers, and journalists demanded his unconditional release in a petition addressed to the UN Human Rights Commissionaire, the European Parliament, and the Iranian Authorities. They expressed their "astonishment that a person, who has served his country, has devoted his life to the improvement of civil society and has come to be known as one of the most vocal and respected journalists of his time should be treated in this way."

Since his release in March 2006, Ganji has traveled internationally in an effort to bring attention to the abuse of political prisoners in Iran. He has been widely recognized by international writers and human rights groups for his courageous work as a stalwart defender of freedom and democracy. Ganji has been a strong supporter of the recent peaceful prodemocracy protests in Iran. His latest book, The Road to Democracy in Iran (2008), is his first book to be translated into English.