Modern presidents wield a stunning array of unilateral powers: waging war at will, making law with the stroke of a pen, and routinely evading core constitutional constraints. “It wasn’t meant to be this way,” Saikrishna Prakash argues in The Living Presidency: the Founders’ vision of a law‐​governed chief magistrate has been replaced by “a funhouse‐​mirror version” of the original design.

What drove this transformation? In his important new book, Prakash implicates a surprising culprit: the progressive notion of a “living Constitution.” The theory of a flexible national charter that can be adapted according to current needs is usually associated with an activist judiciary serving liberal policy goals. Though its proponents frequently decry the Imperial Presidency, what they fail to recognize, Prakash argues, is that “living constitutionalism systematically privileges the presidency”—the office with the greatest freedom of action to seize new constitutional territory and frame its transgressions as “precedent.” The result is an executive increasingly liberated from the Constitution.

Despite originalism’s association with conservative goals, an originalist vision of the office should appeal to the left and right alike, given Americans’ increasing concerns about the unchecked expansion of presidential power. Accordingly, The Living Presidency proposes a series of reforms that, if enacted, could “recage the executive lion.”

Please join us for a discussion of this important and timely new book. 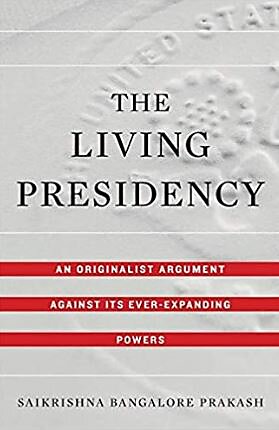 Liberal scholars and politicians routinely denounce the imperial presidency―a self‐​aggrandizing executive that has progressively sidelined Congress. Yet the same people invariably extol the virtues of a living Constitution, whose meaning adapts with the times. Saikrishna Bangalore Prakash argues that these stances are fundamentally incompatible.