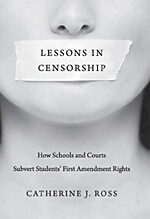 American public schools often censor controversial student speech that the Constitution protects. Lessons in Censorship brings clarity to a bewildering array of court rulings that define the speech rights of young citizens in the school setting. Ross examines disputes that have erupted in our schools and courts over the civil rights movement; war and peace; rights for lesbian, gay, bisexual, and transgender individuals (LGBT); abortion; immigration; evangelical proselytizing; and the Confederate flag. She argues that the failure of schools to respect civil liberties betrays their educational mission and threatens democracy.

From the 1940s through the Warren years, the Supreme Court celebrated free expression and emphasized the role of schools in cultivating liberty. But the Burger, Rehnquist, and Roberts courts retreated from that vision, curtailing certain categories of student speech in the name of order and authority. Drawing on hundreds of lower court decisions, Ross shows how some judges either misunderstand the law or decline to rein in censorship that is clearly unconstitutional, and she powerfully demonstrates the continuing vitality of the Supreme Court’s initial affirmation of students’ expressive rights.

Lessons in Censorship was named the best book of 2015 on the First Amendment by Concurring Opinions (First Amendment News 91). More reviews of the work may be found at cather​ine​jross​law​prof​.com.