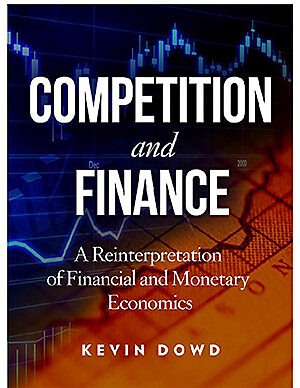 Originally published in 1996, Cato is proud to make available in digital format, Professor Kevin Dowd’s groundbreaking unification of financial and monetary economics, Competition and Finance: A Reinterpretation of Financial and Monetary Economics.

Dowd begins his analysis with a microeconomic examination of which financial contracts and instruments economic actors use, after which he extends this analysis to how these instruments impact a firm’s financial structure, as well as how firms manage that financial structure. After bringing the reader from individual agent to the foundations of corporate financial policy, Dowd then builds a theory of financial intermediation, or a theory of “banking”, based upon these micro‐​foundations. He uses these foundations to explain the role and existence of various forms of intermediaries found in financial markets, including brokers, mutual funds and of course, commercial banks.

Most scholarship in financial economics ends there, or rather examines in ever deeper detail the workings of financial intermediaries. Dowd, after having developed a theory of financial intermediation from micro‐​foundations, derives a theory of monetary standards, based upon his developed media of exchange and its relation to the payments system. While much of Competition and Finance breaks new theoretical ground, it is this bridge from micro‐​finance to macro‐​economics and monetary policy that constitutes the work’s most significant contribution. In doing so, Dowd also lays the theoretical groundwork for a laissez‐​faire system of banking and money, demonstrating how such would improve consumer welfare and financial stability.

As Competition and Finance has been out‐​of‐​print in the United States, our hope is to make this important work available to a new generation of scholars working in the fields of financial and monetary economics. If the recent financial crisis demonstrated anything, it is the need for a more unified treatment of financial and monetary economics. Competition and Finance provides such a treatment.

Kevin Dowd is professor of finance and economics at Durham University in England.

Mark Calabria is Director of Financial Regulation Studies at the Cato Institute.