Donald Trump railed against rising government debt on the campaign trail, but we don’t know yet how he will tackle the problem as president. The debt lurks behind many issues on his plate, including Obamacare repeal, tax reform, defense spending, the border wall, and his upcoming budget. A vote on the statutory debt limit is also coming up.

Trump faces tough choices because President Barack Obama left him with a fiscal mess. A river of red ink under President George W. Bush turned into a torrent under Obama. Federal debt held by the public soared from $5.8 trillion in 2008 to $14.2 trillion in 2016. As a share of gross domestic product (GDP), the debt almost doubled from 39 percent to 77 percent. 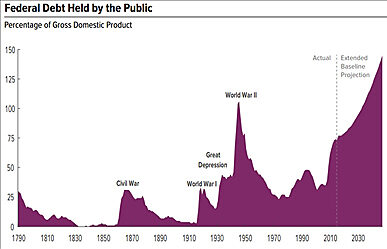 Today’s debt-to-GDP ratio is the second highest in U.S. history, and the Congressional Budget Office (CBO) expects it to keep on growing, as shown in the chart. Only the debt load during World War II was higher.

After WWII, federal debt plunged from 106 percent of GDP in 1946 to just 56 percent in 1955. You might assume that frugal budgeting by centrist Presidents Harry Truman and Dwight Eisenhower diffused the debt bomb, but that was not the case.

The underlying cause of today’s high debt is not a one‐​time crisis like a war. Instead, it is a chronic pattern of failure by politicians to control spending growth across many programs.

Economists Joshua Aizenman and Nancy Marion found that about four‐​fifths of that post‐​WWII drop was due to inflation. By running inflation, the government reduced the real value of outstanding debt and imposed losses on creditors. The government was able to swindle creditors because the average maturity of its debt at the time was a lengthy nine years.

As for frugality, there wasn’t any. The government ran deficits in six of the ten years from 1946–1955. On domestic programs, Truman and Eisenhower were big spenders. We haven’t had an extended period of frugal governance since President Calvin Coolidge was in the White House in the 1920s.

Today’s high debt is much scarier than the WWII debt for a number of reasons. First, the government won’t be able to make the debt disappear with inflation so easily this time, even if that were a good idea. The average maturity of Treasury debt today is much shorter than it was after WWII.

Second, the underlying cause of today’s high debt is not a one‐​time crisis like a war. Instead, it is a chronic pattern of failure by politicians to control spending growth across many programs. Federal politicians have the legal ability to borrow and spend without limit, and they have proceeded to abuse the hell out of that privilege.

Finally, the official outlook for debt in the chart is troubling enough, but it is optimistic if the future is like the past. The outlook assumes that discretionary budget caps will hold, but Congress has broken them repeatedly in the past. It includes only current programs and projects, not possible new ones like border walls or new wars. And the outlook does not include another major recession, which would sharply cut revenues and boost spending.

No one can predict the future, but if policymakers were prudent they would work to reduce deficits and debt right now when the economy is growing. But we’ve been running half trillion dollar deficits in recent years, even though we are in the seventh year of expansion.

In a 1932 radio address, Franklin Roosevelt said, “Let us have the courage to stop borrowing to meet continuing deficits. Stop the deficits … Any government, like any family, can for a year spend a little more than it earns. But you and I know that a continuation of that habit means the poorhouse.”

Unfortunately, that exhortation turned out to be just campaign rhetoric, and the era of chronic deficit spending had begun. Today, we really will be headed for the poorhouse unless we find more politicians with the courage to cut.