Productivity and economic growth continue to surprise on the downside in most countries. While there is a great deal of handwringing over the so‐​called productivity puzzle, little attention is given to the real elixir: freer markets and more competition. Unfortunately, in most places, the policy tide is moving in the opposite direction.

To get a grip on the productivity puzzle, let’s lift a page from the late Senator Daniel Patrick Moynihan, who once said, “You’re entitled to your own opinions, but you’re not entitled to your own facts.” Yes. There is nothing better than to look at hard, empirical evidence.

The World Bank has been rigorously measuring the ease of doing business in many countries for over ten years, producing an abundance of empirical evidence that reveals different aspects of an economy’s regulatory environment. The Bank publishes its results identifying levels of economic freedom (read: regulatory freedom) each year in a report entitled Doing Business. Ten sets of indicators that capture important dimensions of an economy’s regulatory environment are measured. The table below defines each of the ten quantitative indicators. These are each measured by using standardized procedures that ensure comparability and replicability across the 190 countries studied. For each indicator, the scores range from a low of ‘0,’ designating failure, to a high of ‘100’ for those countries that are excelling in the indicator. 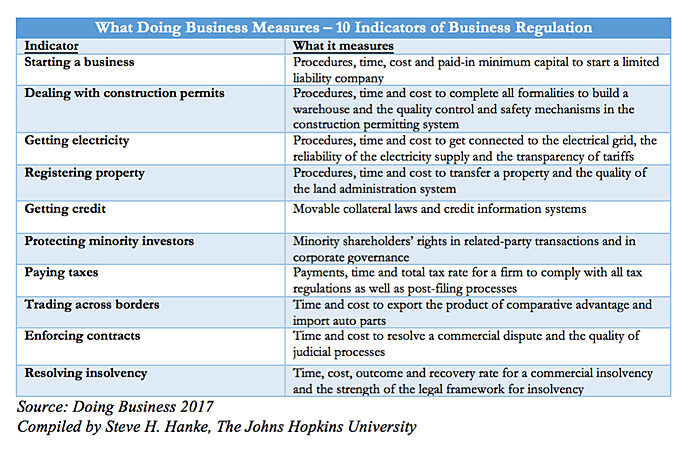 The overall ease of doing business (DB) score for a country is simply the average of its scores for all ten indicators. Using the DB scores, we can determine whether there is a relationship between a freer regulatory environment (a high DB score) and prosperity as measured by GDP per capita. The chart below shows that there is a strong, positive relationship between DB scores and prosperity. For example, the United States’ DB score is 82.45 and its GDP per capita is $57,220 while Zimbabwe’s DB score is only 47.10 and its GDP per capita is $1,081. All the remaining 188 countries are plotted on the chart. There are only five countries that are “outliers,” with outsized GDP per capita relative to their DB scores: Qatar, Luxembourg, Switzerland, Norway and San Marino. 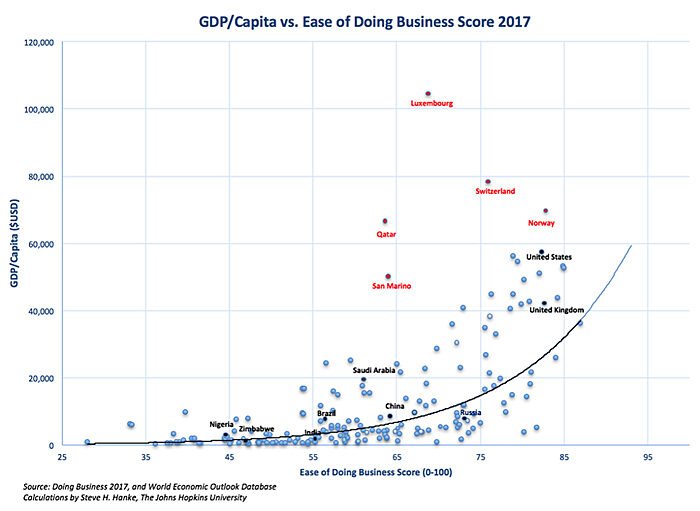 In addition to the strong, positive relationship between regulatory freedom (ease of doing business score) and prosperity (GDP per capita), deregulation yields increasing returns. That is, each incremental increase in the DB score yields larger and larger gains in GDP per capita. In short, with each improvement in the DB score, there is a more-than-proportionate improvement in prosperity. This explains why post-communist countries that embraced Big Bang economic liberalizations, like Poland, have done so much better than the gradualists. The Big Bangers literally got more for their buck.

Economic prosperity is, quite literally, a matter of life or death. The relation between income growth and life expectancy is, of course, complex. Economic prosperity affects life expectancy through many channels: higher individual and national incomes produce favorable effects on nutrition, on standards of housing and sanitation, and on health and education expenditures. While it is true that reductions in mortality have sometimes been the result of “technological” factors, in the larger sense, it is clear that sustained economic growth is a precondition for the kinds of investments and innovations that, over time, significantly reduce mortality. The evidence on this point is abundant and unequivocal.

So, knowing that a freer regulatory environment is associated with higher levels of GDP per capita, we should observe that a freer regulatory environment (a higher DB score) is associated with higher life expectancies. Sure enough, it is. The chart below shows a strong and positive relationship between DB scores and life expectancy — albeit one characterized by diminishing returns (each additional increase in DB score yields smaller and smaller gains in life expectancy.) 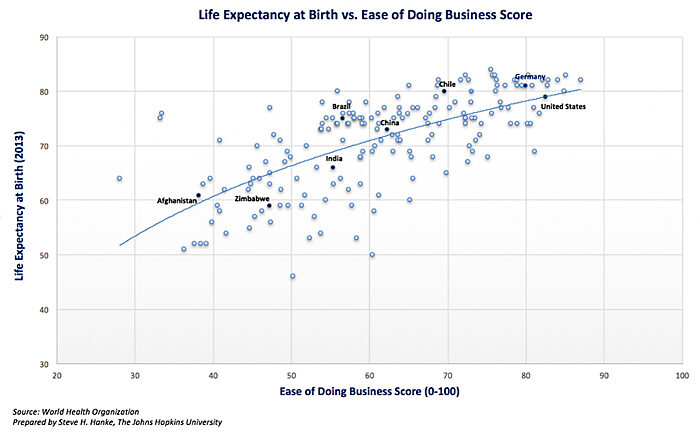 Life Expectancy at Birth vs. Ease of Doing Business Score

Many of the 190 countries reviewed in the Doing Business 2017 report are far away from adopting “best practice” policies when it comes to the regulatory frameworks they impose on businesses. In consequence, prosperity and health are inferior to what they could be. Just how can that be changed? The easiest way is the simplest: just mimic what is done where “best practice” policies prevail. This is an old, tried-and-true technique that is used in industry, particularly when competitive markets prevail. Just copy what the “good guys” do. If you do so, you will become productive and competitive. These lessons about the diffusion of “best practice” and how it improves productivity are documented in great detail in a most insightful book by William W. Lewis: The Power of Productivity. The same strategy can be used by governments to slash regulations and cut red tape.

For example, prior to 2009, one seeking to import and sell pharmaceuticals in the Republic of Georgia faced the same regulatory review process as one would if the drugs were produced domestically. Applicants would pay a registration fee and file a two-part form with the Departmental Registry of State Regulation of Medical Activities at the Ministry of Labor, Health, and Social Protection. The subsequent review involved both expense and delay, with a fair amount of back-and forth between the applicant and the bureaucracy. This process was not intended to exceed about six months, but often took far longer. In addition, the government required all importers to obtain trade licenses from foreign manufacturers, adding to their costs.

This system of government pharmaceuticals approval was costly to administer, and created an uncompetitive market which was dominated by three suppliers. These firms — PSP, Aversi, and GPC — sold about 75% of all medicines consumed in Georgia. Prices tended to be high relative to Georgian incomes, and the number of therapies on the market was lower than in many other countries.

In October 2009, however, the Georgian government did something remarkable. Recognizing that its regulatory machinery was, in fact, unnecessarily duplicating that in many developed countries, it adopted a new “approval regime.” It compiled a list of foreign authorities with good regulatory track records (including, for example, the European Medicines Agency and drug administrations in the United States, Japan, Australia, and New Zealand), and pharmaceuticals that were approved for sale by those entities could henceforth gain automatic approval for sale in Georgia. In addition, the registration fee was slashed 80% for brand name drugs, and packaging regulations were greatly simplified under a new “reporting regime.”

This regulatory outsourcing compressed the time and greatly reduced the expense required to compete in the Georgian pharmaceutical market. It was anticipated that this would put significant downward pressure on prices and improve access to drug therapies in the domestic market. As the chart below shows, it did so very quickly. 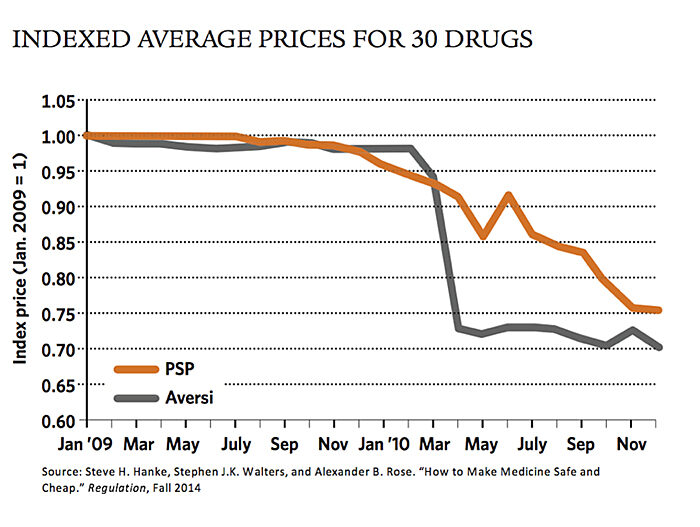 Georgia's move to outsource regulation in 2009 was not the only reform it implemented during the past two decades. Led by the late Kakha Bendukidze, a well-known free-market advocate, Georgia, since 2003, has made sweeping free market reforms as part of its post-communist transformation, touching every aspect of business life. Indeed, Georgia's ease of doing business score increased incredibly during this period. Currently, Georgia ranks 16th in Doing Business, ranking just above Germany. 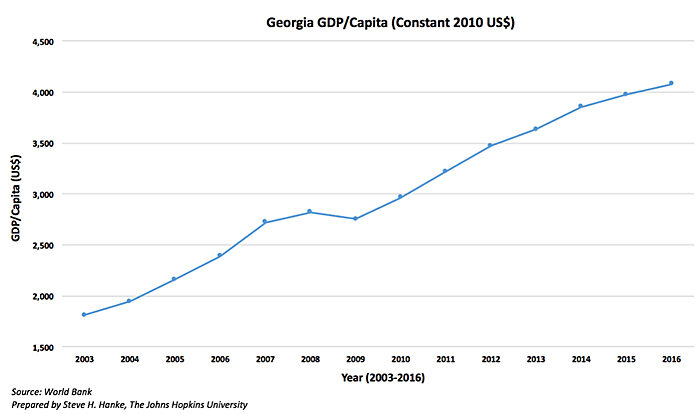 Georgia's free market reforms have certainly paid off. Since 2003, GDP per capita has increased at an average annual rate of 6.44%. This is no coincidence. By breaking down and quantifying the various aspects of business regulation in its economy, Georgia was able to identify the individual factors inhibiting business growth — like it did in 2009 with pharmaceuticals.

Georgia's path shows that a country can unlock a huge potential for increasing productivity, prosperity, and health just by adjusting its rules and regulations to allow its private sector to thrive. With an appeal to the facts, the productivity puzzle is easy to solve: Just mimic observed best practices by slashing regulations and cutting red tape.