Turkish President Recep Tayyip Erdogan came away from April 16th’s referendum with a narrow, if not questionable, win. As a result of the vote, Turkey’s constitution will be amended to allow the President of the Republic to amass considerably more power. For Erdogan, this means that, among other things, he could stay on the throne until 2029. If that weren’t enough, he will not face much in the way of checks and balances. Indeed, he will have the authority to pick judges and ministers and to appoint the heads of the military and intelligence agencies, university rectors and senior bureaucrats. Further, he gains the power to issue laws by decree with very little oversight.

Just what does this mean for the Central Bank of the Republic of Turkey (CBRT), Turkey’s inflation rate, and the struggling lira? In three words, it’s bad news.

The Central Bank operates with an inflation target that is currently set at 5%. In an attempt to hit the target, the CBRT adjusts its policy interest rates. However, the Central Bank’s aim has been way off. As the chart below shows, the CBRT is a chronic inflation overshooter. 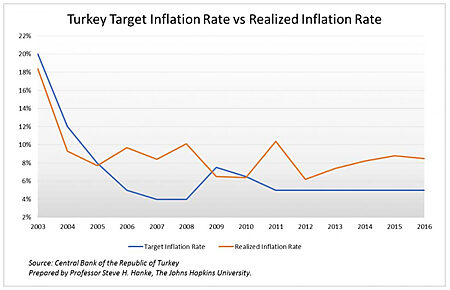 One reason for the inflation overshoot is the fact that the Central Bank uses interest rates as a policy instrument. President Erdogan has repeatedly gone toe-to-toe with the CBRT over these policy rates, twisting arms at the Central Bank to push policy rates down. For Erdogan, lower rates are always the best medicine. With his new presidential powers, Erdogan will probably do more than just twist arms.

Erdogan’s referendum “win” will prove to be a loser for Turkey’s inflation and the lira.

To hit its inflation target, the Central Bank would have to ignore Erdogan (lots of luck) and start focusing on a new target: the growth rate of broad money (M3). That would require the use of the Quantity Theory of Money (QTM).

With this QTM equation, we use Turkish data to estimate the golden growth rate for money supply growth rate that would be consistent with the Turkish central bank’s 5% inflation target. We find that Turkish real GDP growth has averaged 3.85% for the past 10 years and that the percentage change of the velocity of money has averaged -4.34% for that period. If we plug these values into the QTM equation, we find that Turkey’s golden growth rate for money supply (M3) is 13.19% = 5% + 3.85% - (-4.34%). 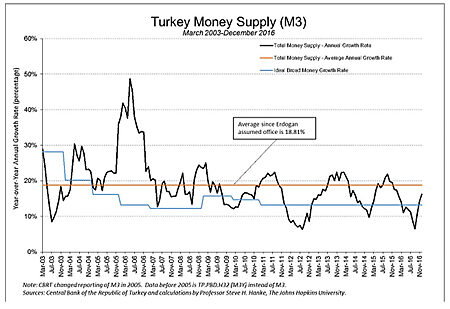 But, Turkey’s broad money grew by 16.2% in 2016, and, as the chart below shows, Turkey’s central bank has consistently overshot the golden growth rate for broad money. Since Erdogan assumed office as the Turkish prime minister on March 14, 2003, Turkish broad money growth has averaged a whopping 18.8%. It’s no surprise that inflation rates have been above the Central Bank’s target. It’s also not surprising that the lira has depreciated by 55% against the greenback since Erdogan assumed power. 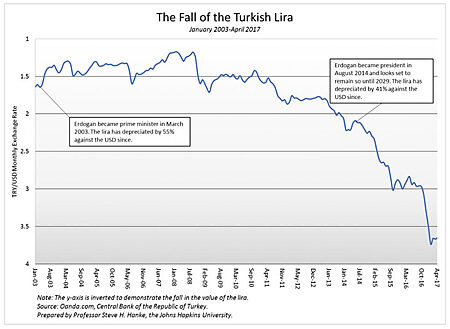 The Fall of the Turkish Lira