Its latest policy proposal, the media reports, concerns an EU‐​wide harmonization of the corporate tax rate. This Franco‐​German proposal is economically illiterate and morally reprehensible. It should be vigorously opposed.

The Brussels machinery, like any large and unaccountable bureaucracy, does not seem to be able to learn from past mistakes. Perhaps the feedback mechanism between the government and the governed, which stimulates institutional innovation and evolution, has been severed by billions of business‐​class miles, millions of expensive meals eaten in Michelin‐​star restaurants and financial remuneration that gives the president of the European Council a salary larger than that of a U.S. president. Recall the referenda in Denmark (1992 and 2000), Sweden (2003), Holland (2005), Ireland (2001 and 2008) and France (2005)?

In all of those cases, the people of Europe said “no” to further integration. Their voices were ignored.

A cabal of center‐​left and center‐​right pan‐​European parties in the EU Parliament ensures that the train of European integration, with its dizzying array of rules and regulations, plows ahead. Many EU observers have suggested that the declining turnout at elections for the EU parliament is a result of a sense — on the part of the European public — that their votes do not matter. No matter how they vote, nothing ever changes.

This Franco‐​German proposal is economically illiterate and morally reprehensible. It should be vigorously opposed.

Thus, when the first election for the European Parliament was held in 1979, 62 percent of eligible voters cast their vote. In every subsequent election, voter turnout declined. It reached a nadir in 2009 (43 percent) that was followed by a tiny uptick in 2014 (43.09 percent).

As a consequence, the once promising and booming free-trade area that was the original European Economic Community has transmogrified into a low-growth, high-unemployment wonderland for a Kafkaesque bureaucracy that is hermetically sealed-off from the deleterious consequences of its own destructive policies. Not surprisingly, the European bureaucracy greets every new EU failure with a parrot-like call for “more integration.” To them, vox populi is, at best, an inconvenience; at worst, an embarrassment. Hence the mistakes — very, very costly mistakes — multiply.

First there was the Common Agricultural Policy — a centrally planned system of production quotas and financial subsidies — that resulted in mountains of butter and lakes of milk. Those were later destroyed or dumped in Third World markets, where they undermined local producers. The CAP was followed by the Common Fisheries Policy that, instead of preserving Europe’s fish stocks through a quota system, decimated them.

A Dutch study, for example, found that, to maintain their quotas, for every ton of fish headed for consumption, fishermen tipped “two to four tons of dead fish” overboard. The Structural and Cohesion Funds, a system of transfer payments that used money from taxpayers in rich countries to try to spur growth and employment in Europe’s under-developed south, became a legendary boondoggle of financial misallocation and corruption.

Today, Greece boasts as many kilometers of highways per capita as Switzerland, but verges on bankruptcy.

But the maraschino cherry on top of the gargantuan cake of European failures is surely the crisis of the Eurozone. The euro was supposed to have ushered in an era of increased growth, higher employment, and greater competitiveness and prosperity.

Countries that were sluggish before entering the Eurozone continue to perform poorly. Thus, last year, the GDP growth rate per person was a respectable 3.6 percent in Ireland and a dismal -0.2 percent in Italy.

Put differently, the introduction of the common currency has failed to force the European south to drink the bracing tonic of supply-side reforms. Instead of harmonizing the Eurozone’s divergent economies with a relatively well-performing Germany or Holland, membership in the Eurozone has enabled southern countries — some of which should not have been allowed into the Eurozone in the first place — to expand their debt holdings massively by taking advantage of historically low interest rates. In retrospect, it seems clear that the financial markets marked Greek debt as no more risky than German debt, because they believed that if Greece ever got into trouble, it would be bailed out by the rest of the Eurozone.

The markets were right.

The 2008 financial crisis exposed the fundamental weakness of the Greek economy and the EU rushed in with tens of billions of euros in new loans. To make matters worse, the European Central Bank started soaking up Greek bonds — in direct contravention of Article 123 of the Lisbon Treaty. Both the President of the European Council, Jean-Claude Juncker, and the President of the European Central Bank, Mario Draghi, have let it become known that they will do anything to keep Greece in the Eurozone.

As the Greek drama approaches its macabre denouement, one is forced to admit that the introduction of the common currency may have increased economic instability in Europe as well as undermined the age-old tradition of the European rule of law.

A Martian beamed down to Earth might very well ask: “Is it not the right time to pause and re-assess the basic premises upon which the European construct has been built? If its foundations shake, should the EU not stop building additional floors?” The trouble is that the European rulers do not live on Mars. They live in Brussels, which is not so much a different planet as a different galaxy.

And so, according to The Telegraph and other media outlets, there is a new scheme afoot to create a minimum corporate tax rate for all of the EU member states. This initiative complements previous attempts by the Brussels elite to introduce a long-term goal of theirs: a Common Consolidated Corporate Tax Base (CCCTB), or “a single set of rules that companies operating within the EU could use to calculate their taxable profits.

In other words, a company or qualifying group of companies would have to comply with just one EU system for computing its taxable income, rather than different rules in each member state in which they operate.”

Concocted by French and German politicians, the minimum corporate tax rate is an ill-disguised protectionist measure aimed at business-friendly countries. A good example is Ireland, which has used its low corporate tax rate of 12.5 percent to attract vast amount of foreign investment. In today’s Europe, unfortunately, what was once praised as healthy competition is now seen as inexcusable tax evasion.

Of course, as many have argued, Ireland has handsomely benefited from its membership in the EU and grown rich over time. Beholden as it is to its European creditors, might Ireland not be persuaded to throw in the towel and embrace a higher corporate tax rate? You know, for solidarity’s sake… But, spare a thought for the ex-communist countries of Central and Eastern Europe who entered into the EU in hope of economic prosperity and political stability right at the time when the failures of the European project were only just becoming apparent. 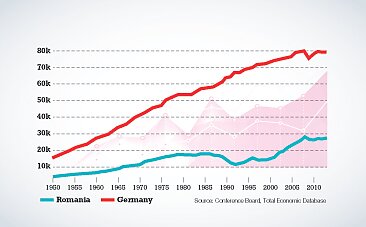 Admittedly, not all of the ex-communist countries are in the same boat. One could imagine Poland thriving outside of the EU, but can the same be said of Romania? An average Romanian may well prefer the mess in Brussels to the mess in Bucharest. And so, consider the effect of the minimum corporate tax rate on two EU countries: Germany and Romania. German per capita income adjusted for inflation and PPP is $40,868 and Romania's is $11,720.

German productivity per person employed is $79,896 and Romania's is $27,628. The German rule of law is among the best in the world. Romania's is worse than Tonga's and Tuvalu's. 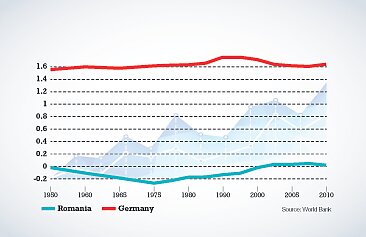 Clearly, a comparatively low corporate tax rate of 16 percent is meant to offset Romania's manifold shortcomings and make it more competitive with other EU countries, including Germany.

The latter enjoys many advantages, but also suffers from a high corporate tax rate of 30.2 percent. Remove the low corporate tax rate and Romania's attractiveness to foreign direct investment suffers a serious blow. Is this, perhaps, what the Germans and their French enablers are trying to accomplish?

If so, the end of tax competition will not only be economically destructive, for it will destroy tax competition and make the EU as a whole less competitive, but also immoral, for it will consign large parts of Central and Eastern Europe to perpetual under-development. The Franco-German plan is a travesty that should be stopped.