Most large enterprises use incentive pay like performance bonuses and stock options to better align the interests of employees, especially top managers, with those of the shareholders. To be sure, these compensation systems are often gamed, and CEOs sometimes receive a large payout even if their performance disappoints. Yet despite these imperfections, incentive pay is an indispensable tool — even startups and privately held companies, which have the strongest reasons to organize efficiently, use it extensively.

We don’t offer incentive pay to members of Congress, but perhaps we should. Like shareholder capitalism, representative government creates a principal‐​agent problem: no matter how much politicians wrap themselves in the rhetoric of public service, their interests are never quite our own. Voter irrationality compounds the problem — members of Congress usually do not literally enrich themselves at the expense of voters; rather, they play to voters’ worst biases in order to get re‐​elected, often at the expense of good policy.1

A performance bonus would help to overcome some of Congress’s complacency and division in the face of decades‐​long economic stagnation. By linking the bonus directly with a measure of economic growth, we would create a strong incentive for Congress to search for economic policies that work, even if those policies themselves are unpopular with voters. Peer pressure from other members of Congress with money on the line might reduce the temptation to engage in demagoguery at the expense of the policies that lead to growth.

In order to induce a large change in Congressional behavior, Congress’s performance bonus should be generous. If the incentive led to even marginally more economic growth, then the proposal would be revenue‐​positive for any level of compensation we might reasonably select. A round number like $100,000 per year might work — it would cost $53.5 million to pay to all 535 members of Congress. Since about 20 percent of GDP is collected in federal taxes, about $267.5 million in additional economic growth would be needed to fund the bonus. With GDP at over $17 trillion, this bonus would therefore pay for itself if it generated at least an additional 0.0015 percentage points of economic growth.

To minimize any perverse incentives, it is worth carefully considering how we would measure performance. Simply tying compensation to GDP growth wouldn’t be effective — because GDP counts government spending dollar‐​for‐​dollar, Congress can boost measured GDP any time it wants. Similarly, per capita measures of well‐​being are not ideal, because at the margin they would create an incentive to exclude the least productive members of society, whether through deportation, imprisonment, or murder.

One good performance metric would be total factor productivity (TFP), which measures (in principle) how much output can be produced with a fixed, diverse basket of inputs. TFP represents how economists think about the state of technology. We might be able to increase output if we all work longer hours, but this doesn’t necessarily represent progress. By focusing on improvements in output that occur apart from the application of more resources, TFP gains represent more unambiguous improvements in living standards than many other economic measures.

Computing TFP is non‐​trivial — it is not a simple accounting exercise, and statistical analysis is necessary to ensure that the basket of inputs (the quality of the labor, etc.) is actually fixed. John Fernald at the Federal Reserve Bank of San Francisco publishes a good quarterly TFP series.3 Unlike the Bureau of Labor Statistics, which also publishes a multifactor productivity measure, Fernald adjusts his TFP estimate for cyclical labor and capital utilization changes, making his series a better measure of pure technological change. In addition, the quarterly availability of Fernald’s data would help to keep TFP fresh in Congress’s mind at all times.

Setting the target threshold at the right level is tricky. If the target is unattainable, then Congress will ignore it; but if the target is so low that meeting it is automatic, then it will simply function as a raise, not an incentive. The target should be a level that we know is possible to achieve, but that we are unlikely to hit without policy changes. A look at the historical data can be instructive. From 1948 to 1973, TFP grew at an average of over 2 percent per year; since 1973, it has grown at less than 1 percent per year. Two percent, therefore, might make a good target. To dampen any remaining cyclical factors in the data, we could even take the average of the two years of any Congress. Rather than earning a $100,000 bonus if TFP grows by 2 percent in a single year, members of Congress would earn a $200,000 bonus if the two‐​year period in which they serve averages 2 percent TFP growth.

Figure 1 shows cumulative growth in TFP since 1947. The shaded areas represent two‐​year Congresses in which TFP growth averaged more than 2 percent. Note the slowdown in trend TFP growth beginning in 1973, and the lower frequency of two‐​year periods of 2 percent TFP growth. If a performance bonus could return the United States to pre‐​1973 levels of growth, the policy would be an astounding success. 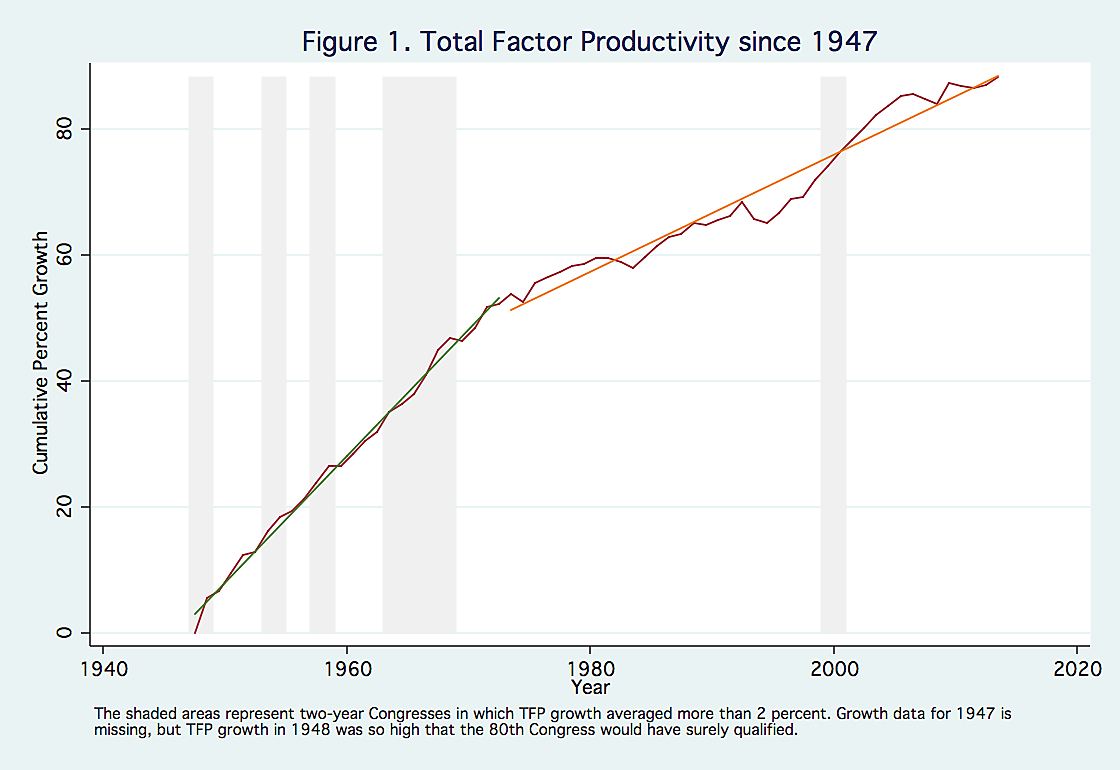 Skeptics might object that Congress is not all‐​powerful and therefore unable to determine the long‐​run rate of economic growth. Growth is affected by non‐​policy factors. It is true that Congress might fail to meet the growth target through no fault of its own, or that it might get lucky and meet the target through no virtue of its own. Nevertheless, it would certainly be within Congress’s power to improve policy by enough to decrease the amount of good luck necessary to hit the target. By implementing the other proposals in this collection, it might dramatically increase its chance of a bonus, even if it can’t guarantee itself one. Even if Congress fails to hit the target, growth would likely be higher than without a performance bonus, and almost certainly no worse.

Another objection might be that rewarding the current Congress for growth that occurred during its term of office may unfairly fail to reward past Congresses for their contributions to that growth. Many good economic policies might take years to generate a payoff in terms of growth. Paying a performance bonus could skew policy toward ideas with a short‐​term payoff. Fortunately (in this instance), average terms of service in Congress are long, and re‐​election rates high. The average term of service in the Senate is over 13 years, and in the House it is about 10 years.4 Since most members of Congress have some expectation of reaping the benefits of future bonuses, long‐​term growth strategies would still be likely to earn support.

A final objection might be that economic statistics could be gamed to reward Congress without any real corresponding improvement in the economy at all. While this concern is understandable, such gaming would be somewhat difficult to pull off. TFP isn’t measured — it is statistically inferred from a host of other measurements. A conspiracy to game TFP without detection would need to span multiple federal agencies. The methodology to calculate TFP is well documented, and TFP estimates are therefore replicable. There is enough low‐​hanging fruit in policy reform that it might be simpler for Congress to legitimately earn the bonus than to try to fraudulently claim it. Nevertheless, even allowing for a healthy amount of gaming, if the policy also produces at least some additional real economic growth, it will remain cost‐​effective and worth trying.

Incentive pay is not perfect — it isn’t perfect in the private sector, nor would it be perfect in the public sector if my proposal were adopted. The chief virtue of a performance bonus for Congress is that it would be so cost‐​effective that it wouldn’t need to be perfect. Even a tiny increase in the growth rate due to additional skin in the game for Congress would more than cover the cost of Congressional bonuses. If we want a political culture that values economic growth in Washington, we might have to pay for it.

Notes:
1 Bryan Caplan, The Myth of the Rational Voter: Why Democracies Choose Bad Policies (Princeton University Press, 2007).
2 One set of authors finds using two field experiments that team incentives are surprisingly effective. Participants on the teams they studied behaved as if they valued compensation for their teammates from two‐​thirds to two times as much as they valued their own. The social effect of such team compensation is therefore quite strong. Philip Babcock et al., “Letting Down the Team? Social Effects of Team Incentives,” Journal of the European Economic Association (forthcoming).
3 John Fernald, “A Quarterly, Utilization‐​Adjusted Series on Total Factor Productivity.” Federal Reserve Bank of San Francisco Working Paper 2012–19, April 2014.
4 Matthew Eric Glassman and Amber Hope Wilhelm, “Congressional Careers: Service Tenure and Patterns of Member Service, 1789–2013,” Congressional Research Service, January 3, 2013.

Eli Dourado is a research fellow at the Mercatus Center at George Mason University and director of its Technology Policy Program.