There is a war happening, but it is not one between nations. It’s a war between millions of years of human evolution and a few hundred years of rapid economic growth. In Markets Against Modernity, Ryan Murphy, Senior Research Fellow at the O’Neil Center for Global Markets and Freedom at Southern Methodist University, describes this war as “Ecological Irrationality.” It is a clash between modern institutions (e.g., the rule of law, science, capitalism, globalism, and pluralistic democracy) and the influence of prehistoric habits on our minds. It is a clash that has spawned systemic errors across economic, social, and political relationships. It is a clash that can finally be analyzed and understood, now that Murphy has thrust it into the light.

He begins Chapter 1 with the relatively innocuous title “Trade is Good” and a discussion of the rise of DIY (“Do It Yourself”) culture. Whether one seeks to make a simple pencil, a chicken sandwich, or an electric toaster, there is an important distinction—as famously noted by Jurassic Park’s fictional chaos theorist Ian Malcom—between what one could do and what one should do. It is true, writes Murphy, that offshoring, outsourcing, and layoffs are less than aesthetically pleasing, but they “are a crucial part of the story of how we went from using monks as scribes … to giving away free pens and pads of paper to whoever shows up.” DIY “evangelists” may believe their cause benefits society, but the truth is quite the opposite.

Murphy goes on to discuss why trade is such a controversial topic for the general public. He cites an inability to interact with all 8 billion of our neighbors. In fact, he warns that we can barely keep track of more than a 100 of them—a limitation that traces back to humanity’s tribal origins. Murphy warns that “[w]e are militantly skeptical of the idea that economic growth is a thing for us: we assume that what others call ‘economic growth’ will always be at the expense of us and those whom we identify with.”

Moving beyond trade, Chapter 2 delivers a crash course in public choice as Murphy seeks to explain why “[t]here’s no shortage of bad policies, even in countries with the world’s most effective governance.” After an introduction to the Virginia, Bloomington, Rochester, and Chicago schools of Political Economy, Murphy turns to George Mason University economist Bryan Caplan’s theory of rational irrationality—a theory which diverges from the theory of rational ignorance in order to explain why people hold systematically biased beliefs with a high degree of certainty, despite little supporting evidence.

To draw on the example Murphy uses, consider the case of a policy choice. It would be difficult, if not impossible, for the average citizen to fully decode the potential ramifications of a new financial regulation, but that citizen will still vote for or against it. Per the theory of rational ignorance, we should observe random results as citizens effectively flip a coin for their decision. Yet, this is not what we see. Rational ignorance gets it right that understanding legislation has an extremely high cost with a small expected benefit for the average citizen. Thus, we can assume voters will rationally choose not to collect the necessary information to understand it perfectly. However, rational ignorance fails to explain why we observe systematic trends where it otherwise predicts randomness. Bryan Caplan explains this phenomenon in his 2007 book, The Myth of the Rational Voter, as “rational irrationality.” Caplan explains that we can graph the “demand for irrationality” to show that people are more likely to behave irrationally as the cost of doing so decreases. Where the cost of irrationality is zero, one reaches a “bliss point” in which beliefs can be held without fear of consequence. Despite little confirming evidence, or even evidence to the contrary, these beliefs are held and acted on with certainty. This is why one can observe systematic voting in favor of ethnocentric policies (anti‐​­foreign bias) despite the evidence that trade is good. However, when the cost of irrationality is high (e.g., waving one’s arms in an attempt to fly), these same individuals behave rationally.

It is against this background that Murphy introduces his theory of ecological irrationality in Chapters 3 and 4. Although the name might be intimidating, the logic is quite intuitive. First, let’s consider what it means to be ecologically rational. The majority of human history has been challenging for individuals, and Murphy argues that the echoes of these past challenges still linger in our minds. Becoming startled by a stick resembling a snake or a sound on a dark night might result in some teasing from friends, but this reaction is rational, or efficient, given the constraints of the environment. These are cases where an abundance of caution has long preserved humanity’s survival. Because, as Murphy notes, this “way of thinking is suited for efficiently dealing with the constraints of the environment … , it is defined as ecologically rational.”

However, when “we apply the mental tools we developed in the social environment of prehistory to modern day societies, politics, and economics,” it becomes clear that something is amiss. People reject trades with strangers as if they were from a waring tribe. Others resist vaccines in pursuit of a more natural state of life. It’s here that Murphy points out that these behaviors are no longer efficient, given the constraints of the modern environment. These behaviors are ecologically irrational.

Murphy warns that the impulses that drive us away from modern institutions (e.g., the rule of law, science, capitalism, globalism, and pluralistic democracy) are deeply embedded in us. These impulses have been honed over the entire course of human evolution. Modern institutions have only existed for a small portion of that history. Although, that is not to say we are without control. To avoid falling victim to persuasive efforts appealing to our inner ancestors, Murphy identifies four signals of ecological irrationality: authenticity, naturalness, folk economics, and conspicuous consumption status signaling. Each signal offers a unique insight into the human mind’s perception of the surrounding world.

In Chapter 6, Murphy follows up with four possible solutions to mitigate ecological irrationality from a social perspective. Unfortunately, although each offers a unique incentive structure that can help inform our understanding of the world, all suffer from the need for radical change in order to be implemented. Regardless if one prefers one solution over another, the required overhaul of the existing government structure makes these solutions less than feasible if one was hoping for practical applications.

Returning to the DIY movement, Chapter 8 hedges earlier claims—though only slightly. After more than 100 pages, Murphy acknowledges the existence of DIY enthusiasts who are simply enthusiasts. He is absolutely correct in his analysis of the “poverty of DIY”—namely, that it is difficult to consider the value of one’s own leisure time, capital accumulation (such as a work bench and set of tools in the garage), and other hidden costs. However, his distinction between pleasurable and daunting work, as well as his noting of the IKEA effect (that consumers place a disproportionally high value on products they create themselves), serve as more of a passing acknowledgement than a robust review of DIY benefits. To this end, I would point Murphy in the direction of Caplan’s lesson on both Kaldor‐​Hicks efficiency and Steven Landsburg’s analysis of drug legalization. In the lesson, Caplan demonstrates how the art of economics consists in tracing extended consequences, not just extended costs.

Chapter 9 follows with a similar argument on “Social Luddism,” a term Murphy uses to describe those who seek social status in a manner akin to rent‐​seeking. One example he presents is wine expertise. People use their time and energy to gain knowledge and status, but Murphy argues that this results in waste from a social standpoint. Disregarding the motte and bailey fashion of some of the arguments, this example suffers from a lack of consideration in regard to possible benefits. Yes, there is a cost associated with this activity, but is there truly no value in the refinement of one’s individual enjoyment of wine? What of other hobbies or interests?

Although such portions of Chapters 8 and 9 raise an eyebrow, they do offer a fitting segue into the discussion of expert credibility in Chapter 10. Murphy uses Anneberg University professor Philip Tetlock’s work on experts to highlight the importance of healthy skepticism in a world influenced by ecological irrationalities. The optimal case is to have society trust experts only where the marginal benefit equals the marginal cost. Below this, people die from preventable diseases because they ignored doctors. However, above this, blind faith leads one down the road to serfdom. It’s a difficult line to walk, but the evidence for ecological irrationality highlighted across the book is proof that it’s important to maintain such skepticism.

Markets are complicated. But markets are not abstract constructs; they are made up of millions of individuals, each of whom have their own unique preferences. If we wish to understand what influences the market, it is crucial that we understand what influences the individual. Murphy has both contributed to this understanding and shown there is much work to be done in the investigation of ecological irrationalities, or the clash between modern institutions and the influence of prehistoric habits on our minds. Students and economic professionals alike should take careful note of this book. While his political reform proposals may be out of reach, the tools and examples that Murphy presents are immensely useful in improving one’s understanding of the hidden forces that guide popular thought in the modern world. 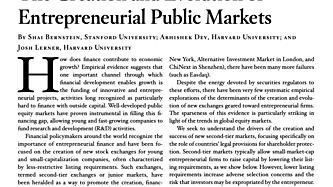 The Creation and Evolution of Entrepreneurial Public Markets

The Economists’ Hour: How the False Prophets of Free Markets Fractured Our Society by Binyamin Applebaum