You Ought to Have a Look: Interview with Will Happer

You Ought to Have a Look is a regular feature from the Center for the Study of Science.  While this section will feature all of the areas of interest that we are emphasizing, the prominence of the climate issue is driving a tremendous amount of web traffic.  Here we post a few of the best in recent days, along with our color commentary.

In a bit of a departure from our typical YOTHAL recipe, where we highlight three or four items from around the web that we found worthy of recommending to you for additional scrutiny, this week we highlight just a single, albeit somewhat lengthy, article that we feel is worth dedicating your time to. The article takes the form of an in-depth interview with Dr. William Happer, emeritus Department of Physics professor at Princeton University (and Cato Adjunct Scholar). It was conducted by TheBestSchools.org as part of their “Focused Civil Dialogues” series, with the topic being global warming. Although the interview was conducted last summer, it has received renewed attention lately as Happer's name has come up as a good choice for President Trump’s science advisor. It is therefore a good example of the kind of tone that the incoming Administration could set on the topic of human-caused climate change.

During the interview, TheBestSchools and Happer work through the flow chart below, from top to bottom. Each step along the way, including the introduction featuring Happer’s personal history and accomplishments, is an interesting read featuring numerous anecdotes to back his well-thought out and thorough reasoning on why carbon dioxide emissions should not be vilified or regulated (at the same time being an ardent supporter of government actions to restrict/reduce real forms of pollution). The interview exudes history, including historical examples of the dangers and downfalls of political intervention in science and restrictions placed on scientific inquiry. 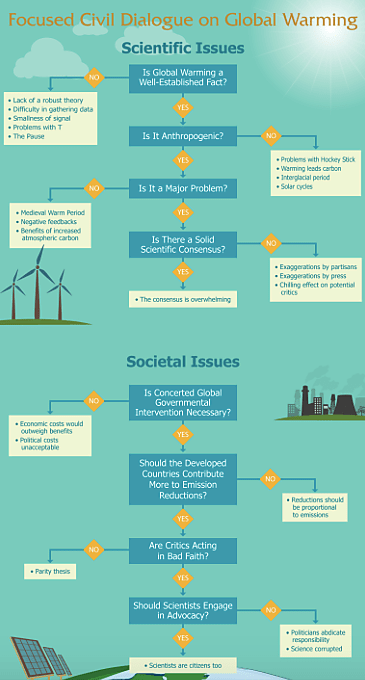 But there is so much more to this interview than is captured by the bottom line—you ought to have a look at the whole thing!