Yet Another Greek Secret: The Case of Phantom Assets

When banks are in distress, it is important to assess how easily the bank’s capital cushion can absorb potential losses from troubled assets. To do this, I performed an analysis using Texas Ratios for Greece’s four largest banks, which control 88% of total assets in the banking system.

We use a little known, but very useful formula to determine the health of the Big Four. It is called the Texas Ratio. It was used during the U.S. Savings and Loan Crisis, which was centered in Texas. The Texas Ratio is the book value of all non-performing assets divided by equity capital plus loan loss reserves. Only tangible equity capital is included in the denominator. Intangible capital — like goodwill — is excluded.

Despite the already worry-some numbers, the actual situation is far worse than even I had initially deduced. A deeper analysis of the numbers reveals that Greece’s largest banks include deferred tax assets as part of total equity in their financial statements. Deferred tax assets are created when banks are allowed to declare their losses at a later time, thereby reducing tax liabilities. This is problematic because these deferred tax assets are really just “phantom assets” in the sense that these credits cannot be used (read: worthless) if the Greek banks continue to operate at a pretax loss.

Similar to its neighbors — Portugal, Spain and Italy —Greece provides significant state support to its banks by offering credit for loss deductions for taxable future profits. For the four largest banks, this type of support made up 38-61% of total equity (see accompanying chart).

Adjusting the Texas Ratio to account for the phantom assets yields much higher ratios. These indicate significantly higher risk of bank failures, barring a capital injection (see the accompanying chart). 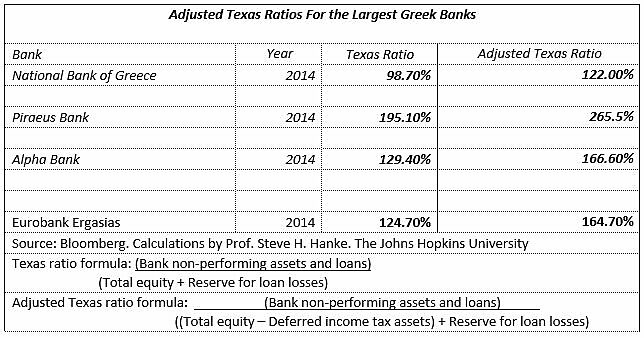