As my Cato colleague Chris Edwards documented here a couple weeks ago, interstate migration data from the U.S. Census Bureau indicate that state tax policy affects where Americans, especially wealthy ones, are choosing to live and work. The following charts (roll over the dots to find your state) confirm Chris’ initial impressions: in 2018 there was a strong, statistically significant (p‐​values < 0.01) relationship between (1) personal state tax burdens — as measured by either the Tax Policy Center or the Tax Foundation — and (2) net interstate migration (ratio of inflows to outflows):

The charts paint a pretty clear picture: as a state increases taxes on high earner residents, it tends to lose them to other, lower‐​tax states. As Chris notes, moreover, high state tax levels don’t necessarily mean high quality government services. In other words, many Americans aren’t getting what they pay for.

The data above are from 2018, but there’s no reason to think that these trends have reversed since then. In fact, the seismic forces unleashed by COVID-19 this year will very likely amplify Americans’ ability to have “superstar city” jobs but live in lower‐​tax jurisdictions, and many are choosing to do just that. In particular, two separate NBER papers from June found that the pandemic significantly increased the share of Americans working remotely; that remote work was concentrated in states like Maryland, Massachusetts, and New York with higher shares of high wage “information work” (tech, management, professional, etc.) jobs; and that many companies expect their remote work exceptions to remain in place long after the COVID-19 crisis ends. Anecdotal evidence backs this up, as large companies like Microsoft (and others) have decided to make formerly‐​temporary “work‐​from‐​anywhere” policies permanent.

In turn, a new Upwork survey of more than 20,000 people finds that between 6.9% and 11.5% of U.S. households — totaling approximately 14 to 23 million Americans — are planning a move due to the growing availability of remote work caused by COVID-19, consistent with the news reports that Chris cited (and many, many others). As a result of these trends, Upwork economist Adam Ozimek estimates that near‐​term migration rates (between counties or states) could be three to four times what they were in previous years. 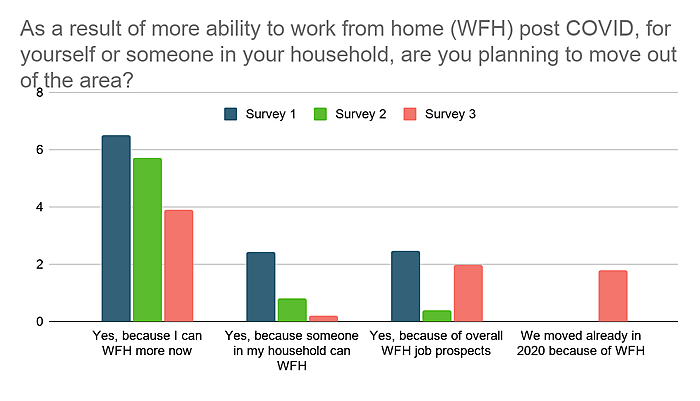 The survey further finds that major cities will see the biggest out‐​migration effects, with many movers planning to relocate far from their current location and motivated by reducing their cost of living (here, housing costs): 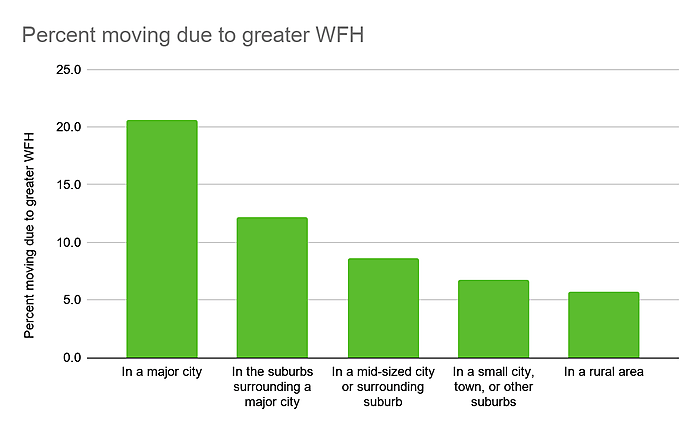 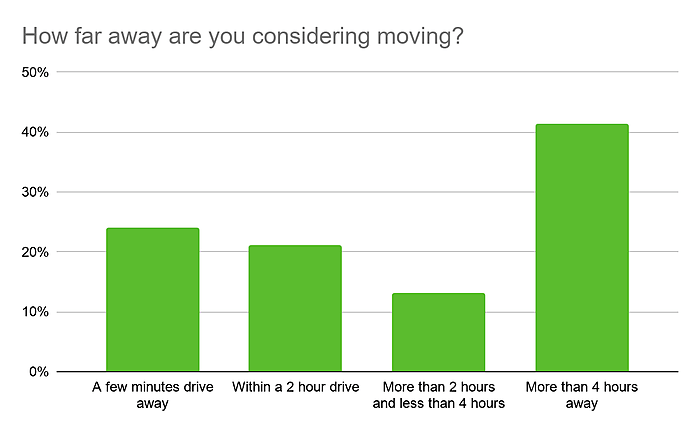 These trends could have dramatic implications for the future of work, U.S. real estate markets, and, perhaps, state and local policy. As Ozimek concludes, the results “should make us optimistic that remote work work has the capacity to help lean against housing and affordability issues across the U.S. by enabling businesses and professionals to access talent and opportunities beyond their local markets.”

Among those “affordability issues,” though unmentioned by Ozimek, is tax policy. For the last several decades, certain “superstar” cities and their surrounding states could increase wealthy residents’ tax (and regulatory) burdens with relative impunity because these places were home to jobs and even entire industries that were unavailable elsewhere in the country. As a result, high wage workers in, say, tech, finance, or law had little choice but to live in New York, Chicago, San Francisco or Washington, DC — and bear their high costs (and other headaches) — because that’s just where the jobs were.

In recent years, however, this dominance has been diluted, as remote‐​work technology has improved or as dynamic but lower‐​cost cities like Charlotte, Denver, Atlanta and Dallas, as well as smaller places like Boise or Durham, have chipped away at the traditional champions’ professional advantages. Prior to COVID-19, these factors produced small but significant interstate migration from costlier jurisdictions to cheaper ones, but the “superstars” still maintained their overall allure. As such, cities and states been able to continue imposing onerous and poorly‐​thought‐​out measures like San Francisco’s recently‐​enacted “Overpaid Executive Tax.”

If COVID-19 and the remote‐​work explosion turn the trickle of superstar city/​state out‐​migration into a river, those days may be numbered. As Ozimek put it, “[e]xpensive places used to have a monopoly on the access to their valuable labor markets, and as work goes remote, they no longer do.” Superstar cities and their states would be wise to recognize this changing balance of power and adapt their tax and regulatory policies accordingly.