Why Bitcoin Is Not an Environmental Catastrophe

The environmental impact of cryptocurrencies looms large among the many concerns voiced by sceptics. Earlier this year, Agustín Carstens, who runs the influential Bank for International Settlements, called Bitcoin “a combination of a bubble, a Ponzi scheme and an environmental disaster.”

Carstens’ first two indictments have been challenged. Contrary to his assertion, while the true market potential of Bitcoin, Ethereum and other such decentralized networks remains uncertain, by now it is clear to most people that they are more than mere instruments for short-term speculation and the fleecing of unwitting buyers.

That Bitcoin damages the environment without countervailing benefits is, on the other hand, an allegation still widely believed even by many cryptocurrency fans. Sustaining it is the indisputable fact that the electricity now consumed by  the Bitcoin network, at 73 TWh per year at last count, rivals the amount consumed by countries like Austria and the Philippines.

Computing power is central to the success of Bitcoin

Bitcoin’s chief innovation is enabling payments without recourse to an intermediary. Before Bitcoin, any attempt to devise an electronic payments network without a middleman suffered from a double-spend problem: There was no easy way for peers to verify that funds promised to them had not also been committed in other transactions. Thus, a central authority was inescapable.

“Satoshi Nakamoto”’s 2008 white paper proposing “a peer-to-peer electronic cash system” changed that. Nakamoto suggested using cryptography and a public ledger to resolve the double-spend problem. Yet, in order to ensure that only truthful transactions were added to the ledger, this decentralized payments system needed to encourage virtuous behavior and make fraud costly.

Bitcoin achieves this by using a proof-of-work consensus algorithm to reach agreement among users about which transactions should go on the ledger. Proof-of-work means that users expend computing power as they validate transactions. The reward from validation are newly minted bitcoins, as well as a transaction fee. Nakamoto writes:

Once the CPU effort has been expended, to make it satisfy the proof-of-work, the block cannot be changed without redoing the work. As later blocks are chained after it, the work to change the block would include redoing all the blocks after it.

[…] Proof-of-work is essentially one-CPU-one-vote. The majority decision is represented by the longest chain, which has the greatest proof-of-work effort invested in it.

Because consensus is required for transactions to go on the ledger, defrauding the system – forcing one user’s false transactions on the public ledger, against other users’ disagreement – would require vast expenditures of computing power. Thus, Bitcoin renders fraud uneconomical.

Bitcoin and other cryptocurrencies replace payments intermediation with an open network of independent users, called ‘miners’, who compete to validate transactions and whose majority agreement is required for any transaction to be approved.

Intermediation is not costless. Payment networks typically have large corporate structures and expend large amounts of resources to facilitate transactions. Mastercard, which as of 2016 accounted for 23 percent of the credit card and 30 percent of the debit card market in the U.S., employs more than 13,000 staff worldwide. Its annual operating expenses reached $5.4 billion in fiscal year 2017. Its larger competitor Visa had running costs of $6.2 billion.

Equally, doing away with intermediaries such as Mastercard has costs. Bitcoin miners require hardware and electricity to fulfill their role on the network. A recent study puts the share of electricity costs in all mining costs at 60 to 70 percent.

Electricity prices vary widely across countries, and miners will tend to locate in countries where electricity is comparably cheap, since the bitcoin price is the same all over the world. One kilowatt-hour of electricity in China, reportedly the location of 80 percent of Bitcoin mining capacity, costs 8.6 U.S. cents, 50 percent below the average price in America. Assuming an average price of 10 cents per kWh, the Bitcoin network would consume $7.3 billion of electricity per year, based on current mining intensity. This yields total Bitcoin annual running costs of $10 to 12 billion.

The value of Bitcoin’s electricity use

Bitcoin total operating costs do not differ much from those of intermediated payment networks such as Mastercard and Visa. Yet these card networks facilitate many more transactions than Bitcoin: Digiconomist reports that Bitcoin uses 550,000 times as much electricity per transaction as Visa.

However, the number of transactions is a poor standard for judging the value exchanged on competing networks. Mastercard and Visa handle large numbers of small-dollar exchanges, whereas the Bitcoin transactions are $16,000 on average. The slow speed of the Bitcoin network and the large fluctuations in average transaction fees make low-value exchanges unattractive. Moreover, unlike card networks, cryptocurrencies are still not generally accepted and therefore used more as a store of value than a medium of exchange.

With that in mind, if we compare Bitcoin and the card networks by the volume of transactions processed, a different picture emerges. The volume of Bitcoin transactions over the 24 hours to August 27 was $3.6 billion, which is not an outlier. That yields annual transaction volume of $1.33 trillion. This is below Mastercard’s approximate $6 trillion and Visa’s $7.8 trillion in payments volume over 2017. But it is not orders of magnitude below.

In fact, as ARK Invest reported over the weekend, Bitcoin has already surpassed the smaller card network Discover, and online payments pioneer Paypal, in online transactions volume. Overtaking the most successful payment network of the internet era is quite a milestone. 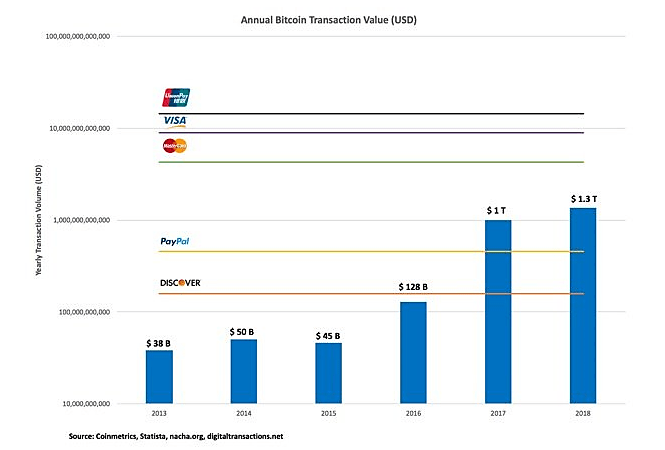 Long-term prospects for the Bitcoin network

As mentioned above, comparisons between Bitcoin and intermediated payment networks must be conducted with caution, because most transactions on Mastercard, Paypal and Visa are for the exchange of goods and services, whereas much of the dollar value of Bitcoin transactions has to do with speculative investment in the cryptocurrency and the mining of new bitcoins. Only a fraction of Bitcoin payments involve goods and services.

However, that people are eager to get a hold of bitcoins today shows that some firmly believe Bitcoin has the potential to become more widely demanded.

The prospects for Bitcoin as an investment, on the other hand, are perhaps more questionable than its proponents assume. After all, the value of a medium of exchange is given by the equation MV = PQ, where M is the money supply, V the velocity at which money units change hands, P the price level and Q the real volume of transactions.

Bitcoin bulls posit, quite plausibly, that Q will only grow in coming years. But unless Bitcoin becomes a store-of-value cryptocurrency that is not frequently exchanged, V will also grow as Bitcoin users transact more on the network. This will push up the price level P and depress the value of individual bitcoins. Thus, Bitcoin’s very success as a medium of exchange may doom it as an investment.

But that is orthogonal to the policy discussion as to whether Bitcoin’s admittedly large power requirements are a matter of concern. Whereas competing payment systems rely on a many inputs, from physical buildings to a skilled workforce to reputational and financial capital, Bitcoin’s primary input is electricity. What Bitcoin illustrates is that achieving successful governance without the role of an intermediary is costly – costly enough that Bitcoin may struggle to outcompete payment intermediaries.

On the other hand, there are efforts afoot to introduce innovations into the Bitcoin network to increase its energy efficiency. The Lightning Network project, which seeks to enable transactions to happen outside the Bitcoin blockchain over the course of (for example) a trading day, and to record only the starting and closing balance, is such an initiative. Other, more controversial ideas are to rapidly increase the maximum size of a transaction block, which would speed up transaction processing but might not make much of a dent in power usage. Others have addressed the issue more directly, by building renewable generation capacity specifically aimed at cryptocurrency mining.

Is Bitcoin’s electricity use socially wasteful?

Behind claims like Carstens’ that Bitcoin is “an environmental disaster” lies the veiled accusation that the cryptocurrency’s electricity use is somehow less legitimate, or socially less valuable, than electricity use by schools, hospitals, households and offices. Is there any truth to this claim?

Economists have known since at least Pigou that the only way to determine wastefulness in resource use is by examining whether an activity has unpriced externalities which might lead agents to over- or underuse the resource. In those instances, these social costs must be incorporated into the price of the resource to motivate efficient production.

What this means for Bitcoin is that the cryptocurrency itself cannot be “socially wasteful.” The environmental impact of electricity use is unconcerned with the purpose of that use. Whether electric power is consumed for the mining of cryptocurrency or the production of cars has no bearing on the environmental effects. Therefore, the impact of Bitcoin depends on two factors over which the network has no control: the way in which power is generated and how electricity is priced.

Both vary widely across jurisdictions. Iceland, which due to its comparably low power costs and still lower temperatures is a favorite location for Bitcoin miners, generates nearly all of its electricity from renewable geothermal sources, which also emit much lower amounts of carbon than coal- or gas-fired plants. Iceland participates in the European Union’s emissions trading system, which despite its imperfect design does a good job of internalizing the social cost of power generation.

Canada, like Iceland a cold jurisdiction, uses hydroelectric power to generate 59 percent of its electricity. In the crypto-favorite province of Quebec, 95 percent of power is hydroelectric, and prices are particularly low. While the overall environmental impact of hydropower is contested, there is agreement that its carbon footprint is a fraction of those of gas- and coal-fired plants. Canada has also recently implemented a nationwide cap-and-trade scheme in a bid to price carbon emissions.

China, the largest jurisdiction for mining, offers a less encouraging picture, as it still generates close to half its electricity from coal. However, this is drastically down from 72 percent in 2015 and has dropped even in absolute terms. The People’s Republic’s attempts to reduce its carbon footprint per unit of GDP have relied more on command-and-control shifts from coal to other sources than on market forces.

Whichever way one looks at it, however, the environmental impact of Bitcoin and other electricity-intensive cryptocurrencies is a function not of their software architecture, but of the energy policies in the countries where miners operate.

Much ado about nothing

We can only conclude that reports of cryptocurrencies’ wreaking environmental havoc have been greatly exaggerated. An examination of transaction volumes shows that Bitcoin’s power use is not outside the league of intermediated payments systems. Moreover, it will be in the interest of Bitcoin miners to reduce the per-transaction electricity cost of mining, as otherwise the network will struggle to grow and compete with incumbents. Finally, there is no evidence that cryptocurrencies have environmental externalities beyond those that can be ascribed to any electricity user wherever electricity is inefficiently priced. But public policy, not cryptocurrency innovation, is at fault there.