Who Benefits from Opportunities in the Online Platform Economy?

The rise of new business models in online platforms and the sharing economy have inevitably been met with calls for more regulations. In his most recent budget, President Obama proposed to expand funding for efforts to “crac[k] down on the illegal misclassification of some employees as independent contractors.” Policymakers at the state and local levels have also called for more stringent regulations on these new business models.

Over the weekend, voters in Austin failed to overturn the city council’s ordinance that would impose a series of new regulations on ride-hailing companies operating in the city, from requiring drivers to go through fingerprint-based background checks, to restrictions detailing where drivers can stop for drop-offs and pickups. In response, Uber and Lyft announced that they had suspended operations in the city. In light of this rush to regulate, it is important to consider the people who rely on the opportunities made available by the new online platform economy. People utilize these platforms in different ways. Some participants offset fluctuations in traditional income to maintain their standard of living, while others use the platforms to rent out assets to supplement earnings from their traditional jobs. People from every age cohort and across the income distribution earn money through these new business models. New regulations that obstruct the development of the online platform economy could harm the many different people who choose to utilize those opportunities.

In one report from the JPMorgan Chase Institute, the authors analyzed anonymized data from 260,000 customers with earnings from any of 30 established online platforms and found that a growing number of people are participating, but that their reliance on these platforms has not increased. In other words, more people are using these new models, but not as full-time jobs. Earnings represented 33 percent of monthly income in labor platforms, in which participants are connected directly to customers, like Uber or Lyft. In the capital platforms where participants rent or sell to customers, like Airbnb, earnings represented only 20 percent of monthly income. So in neither component are most participants relying on earnings from these platforms as the majority of their income, for most people these aren’t full-time jobs.

Participating in the labor platform allows people to weather variations in their monthly income, as they can choose to work more hours to offset dips in other earnings. In months participants actively used the labor platform, those earnings accounted for an additional 15 percent of income, offsetting the 14 percent shortfall in non-platform income in those same months. As the authors note, this is in most cases a more attractive option than the old ones: look for a supplemental traditional job, reduce spending, or take on more credit. The capital platform is slightly different, in that those earnings tended to supplement traditional income, rather than replace it. So participants generally used the capital platform to try to increase their monthly income and raise their standard of living by utilizing the assets available to them.

In a related report released last week, the authors find that while the percentage of adults with earnings from the online platform economy is fairly consistent across income quintiles, participants in the lower income quintiles are more reliant on these earnings, at least in the labor platform. Labor platform earnings account for more than 28 percent of total annual income for participants in the lowest quintile, compared to roughly 20 percent in the highest. Capital platform earnings, on the other hand, represent between 10.5 and 11 percent of annual total income across all quintiles.

Percentage of Annual Income Earned Through Open Platform Economy, by Income Quintile and Type of Platform 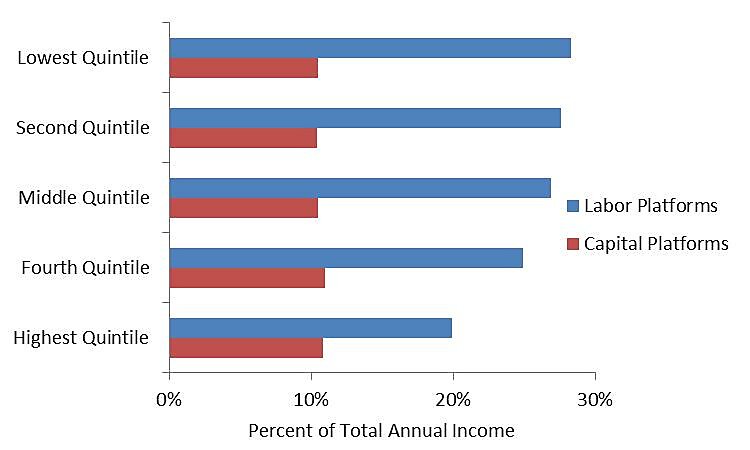 Somewhat surprisingly, the authors find that while young people 18-24 were most likely to participate (5.2 percent), participants 55 and older are actually the group that derived the largest share of total income from these earnings. This suggests that workers in or near retirement could also be turning to these new business models as a supplemental source of income in lieu of continuing traditional work.

People of all ages and across the income distribution participate in the online platform economy. These business models have given these people new options and opportunities: some people use these platforms to replace unexpected reductions in other income that could otherwise cause serious problems. Older participants are turning to these platforms as a way to supplement their earnings and maintain their standard of living as they transition out of the workforce. Imposing more regulations on the online platform economy could limit or take away these opportunities.