Last spring White House staffers presented President Trump with the opportunity to introduce a very interesting wrinkle to the Jones Act, the 1920 law that restricts domestic waterborne transportation to vessels that are U.S.-flagged, U.S.-built and mostly U.S.-owned and crewed. Specifically, Trump’s staff proposed a ten‐​year waiver for the transportation of liquefied natural gas (LNG). No vessels designed to transport LNG exist that are compliant with the law and, as a result, areas of the country including New England and Puerto Rico must import it from foreign sources not subject to the Jones Act.

After catching wind of the proposed waiver the Jones Act lobby applied maximum pressure to head it off, and a Republican delegation comprised of six senators and House Minority Whip Steve Scalise was dispatched to the White House to ensure the lobby’s views were aired. President Trump wilted under their opposition and the waiver was not issued.

Now over a year later, a story in the Washington Examiner provides many of the sordid details behind l’affaire LNG, and how the Jones Act lobby prevailed in its effort to deny Americans access to domestic energy supplies. The following are five key takeaways:

The Jones Act’s national security justification rings increasingly hollow. Perhaps the most noteworthy aspect of the Examiner story is that both the National Security Council and Pentagon were fully on board with the proposed Jones Act waiver. That’s not suprising. The Jones Act, after all, forces Americans to rely on foreign sources of energy, including from Russia. But NSC veteran retired Air Force Gen. Robert Spalding suggests that NSC members view the Jones Act’s harm going beyond just its impact on energy, stating there is a belief inside the group that the law “has not enabled the success of the U.S. maritime industry in a manner that is promoting U.S. national interests.”

But if the senators knew full well that the waiver was narrowly aimed at LNG shipments, that’s hardly exculpatory. This means that they opposed a waiver that would have provided important national security and economic benefits with no harm to the U.S. maritime industry. The U.S. maritime industry does not offer bulk LNG transport as a service—hence the need for the waiver—and thus the waiver would not have displaced a single U.S. ship or mariner. This was all upside with zero downside.

That these Republicans displayed backbone against Trump only when a protectionist swamp creature such as the Jones Act was on the line only adds to the embarrassing and shameful nature of this episode.

The Jones Act lobby’s fierce opposition to the waiver is no surprise. Although a waiver for the domestic transport of LNG would not cost a single U.S. mariner his or her job, the industry’s full‐​scale attack against the measure is thoroughly understandable. Maintaining the Jones Act rests on at least two key pillars: a perception of reform efforts as futile and limited insight into its costs. A waiver would have put a severe dent into the first element and provided valuable transparency into the savings that could be realized from its reform or repeal. Both were massive threats that the lobby could not allow to materialize.

Meanwhile, as noted in the Examiner, only weeks after Chao helped torpedo the proposed waiver a leading Jones Act lobbying group, the American Maritime Partnership, announced the creation of a new American Maritime Heroes campaign to honor individuals and groups notable for their “courage, outstanding achievements, or noble qualities.” The initial recipients of this honor were merchant mariners who crewed transport ships during World War II…and Elaine Chao. 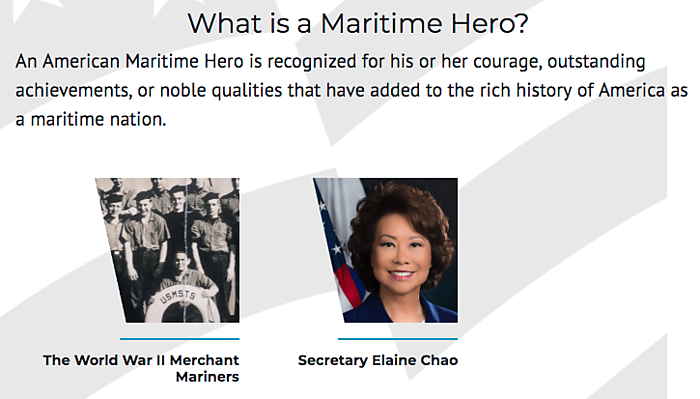 If President Trump opposes Jones Act protectionism, you know it has to be bad. Given his protectionist predilections, President Trump probably makes for among the unlikeliest of Jones Act opponents. Yet the Examiner says that former head economist at the Council of Economic Advisers, Casey Mulligan, claims Trump “hates” the law. This is less surprising than it may seem, with signs of Jones Act dissatisfaction inside the White House emanating for years. Consider:

To these items must be added the proposed LNG waiver from last year, which Trump was said to initially favor. Alleged grumblings about the law in private while caving in public, however, earn him only limited credit. To truly count as a Jones Act opponent President Trump needs to take action. Fortunately, it is not too late to revisit his decision about the proposed waiver.

Presumptive Democratic nominee Joe Biden has made clear his position on the Jones Act—he favors it. Will Trump make clear his own stance?