Wage Effects of Immigration Are Small

Immigration has small long-run relative wage impacts on American workers by education (Figure 1). These estimates are the most popular and widely cited in the immigration debate. They were completed by George Borjas and Gianmarco Ottaviano and Giovanni Peri. Their findings are very close but diverge most appreciably for the wages of dropouts, even though the effect is small and positive for all native-born workers lumped together. According to the 2015 American Community Survey, 9.4 percent of native-born Americans over the age of 25 are dropouts. Thus, over 90 percent of American workers are in education-skill categories where immigration increased relative wage, according to the most negative finding (Figure 1).

Relative Impact of Immigration on Native Wages by Education 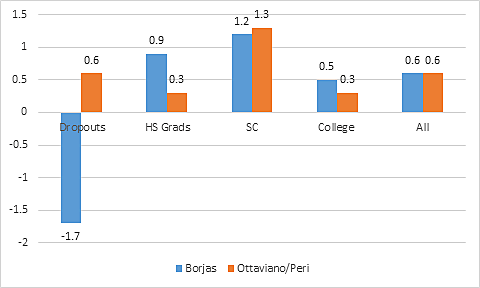 Borjas and Ottaviano and Peri find that the wages of immigrant workers are most affected by new immigrants (Figure 2). That’s because new immigrants have skills and education levels most similar to previous immigrants, so they compete against each other more than with natives who have very different levels of skill and education. As we point out in Figure 25 of this bulletin, immigrants still support liberalized immigration despite the negative wage effects they experience. There are at least three explanations for this.

Relative Impact of Immigration on Immigrant Wages by Education 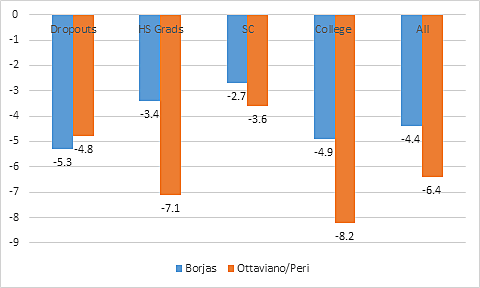 First, most of these immigrants want to bring over their family members, so they support expanded immigration even if they know they will face more wage competition. People are willing to pay a lot to have their families nearby. Second, wage competition does not generally cause anti-immigration opinions. As Jens Hainmueller and Daniel J. Hopkins wrote in their wonderful literature review of the literature on opinions toward immigration: “As an explanation of mass attitudes toward immigration, the labor market competition hypothesis has repeatedly failed to find empirical support, making it something of a zombie theory.” Immigration attitudes show little evidence of being strongly correlated with personal economic circumstances. Instead, people are most concerned with immigration's nation-wide impact on many issues.

Third, the wage gains from immigrating are so relatively gargantuan that the small single-digit decline is swamped. Research on the wage premium by Michael Clemens, Claudio E. Montenegro, and Lant Pritchett illustrate this point. A 35-year-old Mexican-born male urban worker with nine years of education can expect a monthly wage 2.53 times as large just by immigrating to the United States. In other words, his monthly wage income rises from $580.90 to $1,470.80 by immigrating. Without immigrants during the time period, as measured by Borjas and Ottaviano and Peri, his monthly wage income would have instead been $1,541.40 or $1,548.75, respectively, or 2.65 to 2.67 times as great as in Mexico. That’s a maximum difference of about $78 a month.