The U.S. Trade Beef with China

The big picture of U.S. — China trade tensions can be difficult to sort out. How problematic are China’s trade practices, as compared to those of other countries? What is the appropriate U.S. government response? These are not easy questions to answer (although we do have some views).


Sometimes it can be helpful to focus on particular sectors instead. One such sector is beef, which U.S. farmers would like to export more of to China. At a recent Senate hearing, U.S. Trade Representative Robert Lighthizer was asked about this (starts around 20:00):

Sen. Jerry Moran: Let me get another question in before my time is fully expired. I applauded the administration for successfully concluded negotiations with China in 2017 to allow the US beef exports resumption into China after they were blocked in 2003. However, the 25% retaliatory tariff on US beef, which stems from the USTR 301 investigation, threatens to halt those exports and certainly any expansion. So on one hand, we had the opportunity to high five and brag about beef going to China. That seems — that opportunity seems to have disappeared and most concerning is what the growth potential that exists in China, what it does to our opportunities for increasing US beef sales.


Lighthizer: So, if I can, let me speak for a second about beef with China. I think it is a good example of what we are facing with China. So, the President’s strategy, as was the strategy of prior administrations, was to initially engage in a dialogue with China. We clearly have a chronic problem with China, we have a trade deficit with China, which was unsustainable, 375 billion dollars. A lot of which is not the result of real economics but really is a result of state capitalism. So, ten years ago as a result of negotiations because of their unfair practices, China agreed to allow US beef in certain circumstances, ten years ago. Over the course of the next ten years they didn’t let in beef because they made the promise but didn’t keep the promise. The President, during the 100‐​day period, when the President decided I will try a dialogue first, had that dialogue and as a result of that they agreed to let beef in. Let’s be clear though. The amount of beef — US beef that was eligible to come in was less than 3% of US production. So it wasn’t like it was going to be a panacea, although a lot of people thought it was. The result is that after the last time I saw the numbers, which were eight or nine months in, this was something like $60 million worth of beef sold in all of China. So I guess to me the China beef situation is more an example of what we’re facing with China than it is actually a solution. We really thought we would (a) be able to sell beef with hormones, the normal US production of beef into China for a long period of time. We don’t think they have a WTO right to keep us out. So while we made some headway in there, you’re right, they did take it away. That raises the question, this is going to be the question not with beef, but with all of the members and all of the retaliation, this may not be the appropriate time to raise it, I’ll do it on someone else’s time if you’d like, but we have to at some point discuss why we’re doing any of this. Because there clearly is pain associated with what we’re doing and the President is very sympathetic to not only cattle ranchers but to everyone else and a lot of ag but a lot of over people who are being, we believe, unfairly treated as a result of our attempt to really level the playing field.

Last year we wrote about the problems faced by U.S. beef exporters. (It’s worth noting that the 2003 ban mentioned by Senator Moran was in response to concerns about mad cow disease, and other countries also blocked U.S. beef exports). In our paper, we had some data showing how much beef imports into China have increased in recent years, and how well other countries were doing selling their beef in China: 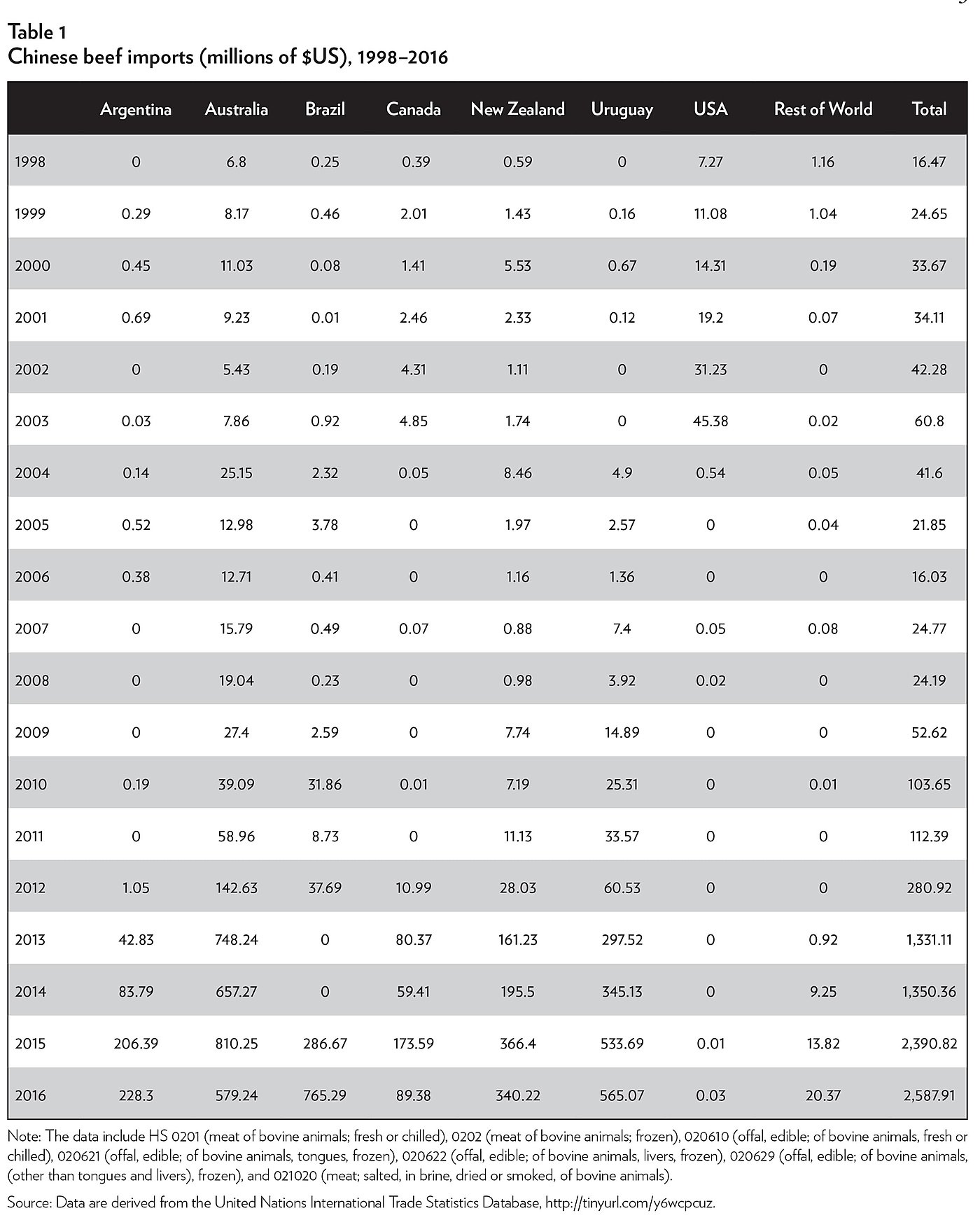 Since we put together this data, China removed its ban on U.S. beef as part of a broader U.S.-China agreement, and U.S. exports of beef to China have grown. U.S. Meat Export Federation data show that, after the ban was lifted, there have been just over $60 million in sales of U.S. beef in China, over the past year or so. That figure matches pretty closely to the one Lighthizer referred to in his answer above. However, this figure is still dwarfed by the imports from other countries. As the table shows, imports come mostly from countries other than the United States. There are a number of reasons for the expansion of non-U.S. beef imports into China in recent years, but it is worth pointing out that Australia and New Zealand have a price advantage over their competitors, because those countries have negotiated trade agreements with China under which China cut its beef tariffs. Some of the other major beef exporting countries are also negotiating with China. Beyond tariffs, a trade negotiation provides a forum to talk about regulatory barriers.


If you don’t like numbers, we now have some visual evidence as well, as one of us (Huan) just went over to China, and while there she took a picture of the beef for sale in a Chinese grocery store in downtown Guangzhou, one of the most developed cities in China: 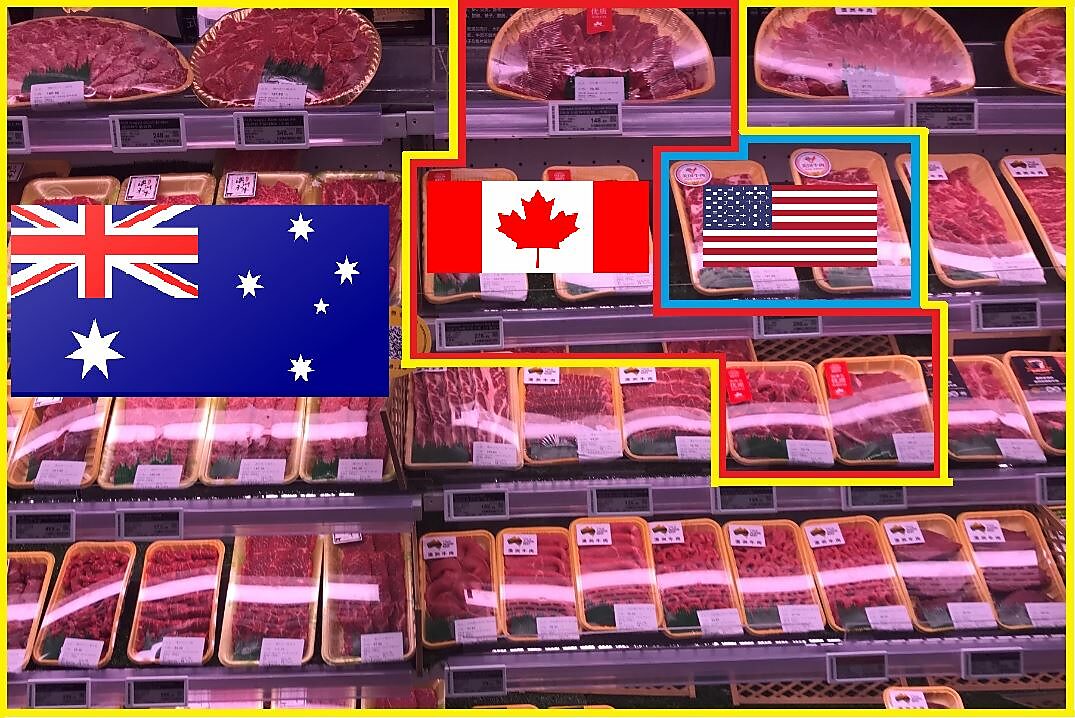