Today, let’s look at the quality of state management, as measured by a major report by the Pew Center on the States. The Pew report gave letter grades to the 50 state governments for management of finances, employees, infrastructure, and information. Pew also provided an overall state score.


I’ve converted the Pew overall state government management scores to numbers from 1 to 10 and plotted them against state unionization rates (“10” is the best management score). The chart below shows that as the share of a state workforce that is unionized grows, the overall quality of state management falls, as measure by the Pew scores. The chart shows the raw data in blue dots and the statistically fitted line in pink.


The bottom line: public‐​sector unionization is not a good idea, as it apparently leads to lower‐​quality government management and to higher debt levels. As such, I’ve argued that collective bargaining in state and local government workforces should be banned. 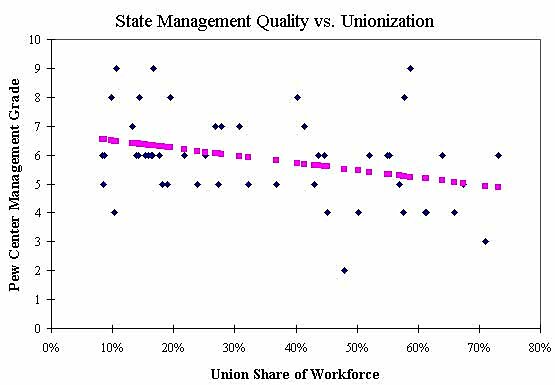