“Unfettered” Free Trade? If Only…

“Trump has heaped scorn upon those Republicans who have worshiped at the alter of unfettered free trade.”  - Joe Scarborough, May 22, 2016

“I wouldn’t say that you know this free trade obsession is something that can’t get looked at in regard to making things more fair.” – Incoming White House Chief of Staff Reince Priebus, November 14, 2016

One of the most pervasive themes of the last year is the notion that America’s populist uprising, and the success of President-elect Donald Trump, has in large part been a direct response to the United States’ – and in particular the Republican Party’s – libertarian obsession with “unfettered” free trade.  MSNBC’s “Morning Joe” Scarborough, quoted above, has been a big cheerleader of this argument, which has been treated on his show and elsewhere in the media as obvious truth.  And now we see one of the few official members of the future Trump administration, Reince Priebus, repeating the notion, signaling to the country that America’s great free trade moment might be ending.  Clearly, the idea is prevalent and persuasive.

But it is also dead wrong.

First, although the United States maintains a relatively low average import tariff of around 3 percent, it also applies high tariffs on a wide array of “politically-sensitive” (read: highly lobbied) products: 131.8% on peanuts; 35% on tuna; 20% on various dairy products; 25% on light trucks; 16% on wool sweaters, just to name a few.  (Agriculture is particularly bad in this regard.)  We also maintain a long list of restrictive quotas on products like sugar, cheese, canned tuna, brooms, cotton, and baby formula.  And although the U.S. has 14 free trade agreements (FTAs) with 20 different countries and is a longstanding member of the World Trade Organization (WTO), many of these same “sensitive” products have been exempted from the agreements’ trade liberalization commitments.  Free trade for thee, but not for me.

Second, while America’s tariffs and other “formal” trade barriers have indeed been declining for decades, they are only a small part of the overall story.  U.S. non-tariff barriers – export subsidies, discriminatory regulations, “buy local” rules, “fair trade” duties, etc. – have exploded in recent years.  In fact, according to a recent analysis by Credit Suisse, when you add up all forms of trade barriers imposed between 1990 and 2013, the biggest protectionist in the world isn’t China or Mexico but none other than… the United States: 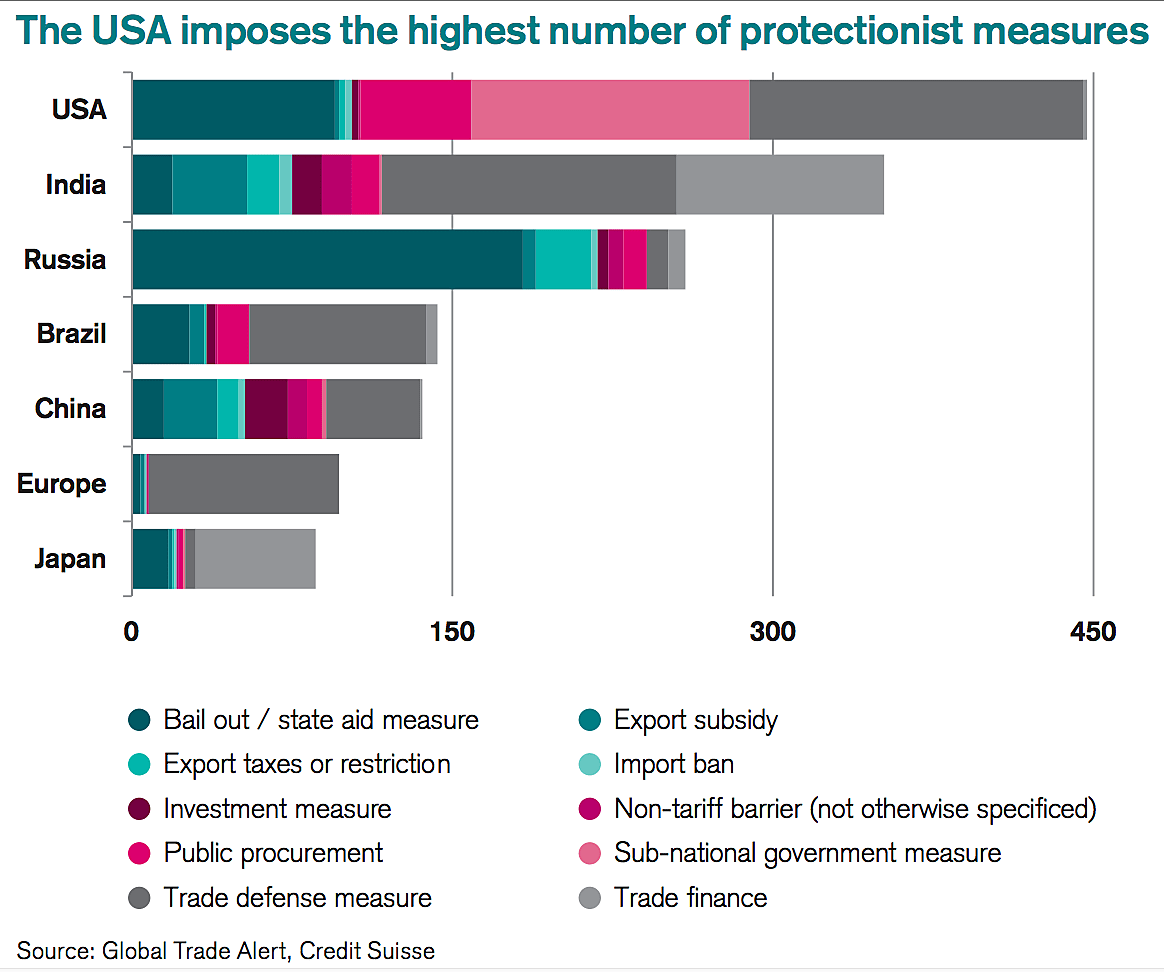 A look at U.S. “trade defense” measures (what we call “trade remedies” – anti-dumping, countervailing duty and safeguards measures) is revealing in this regard.  According to the U.S. International Trade Commission, the United States as of October 31 imposes 373 special protective duties on a wide range of products, more than 90 of which came in the last three years alone (i.e., since chart above on U.S. protectionism was produced):


Chinese imports face 140 of these special duties, which can often be as high as 100%, and one sector in particular has benefited from the import protection: iron & steel.  Incredibly, the U.S. industry that benefits from over half of all anti-dumping and countervailing duty (AD/CVD) orders on imports is also the same sector that has been constantly cited by President-elect Trump and his political and media cheerleaders as the biggest victim of America’s supposed religious devotion to “unfettered” free trade: 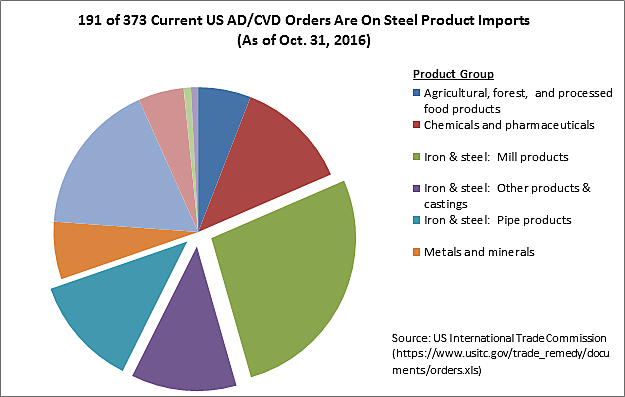 Other sectors supposedly crushed by the scourge of libertarian trade policy, such as chemicals and agricultural products, also disproportionately benefit from trade remedies protection.

These facts demonstrate quite clearly that American manufacturing and agribusiness, as well their workers, are, in fact, a far cry from being the “unprotected” victims of “unfettered” free trade.  They also should indicate that the commercial failures of U.S. steel or textiles or other sectors, as well the suffering of America’s working class, have not resulted from a lack of trade protectionism.  There is plenty of protection available, and many U.S. industries take full advantage.

If this is “free trade,” then I shudder to think of what’s coming next.

For the steel industry, at least, things are looking up: they have a true champion, former Nucor CEO Dan DiMicco, in charge of picking the next U.S. Trade Representative – a move that, you’ll be shocked to learn, has been cheered by Leo Gerard, the president of the U.S. steelworkers union.  Finally, these poor, unprotected saps will get the fair shake in the global economy that they, and President-elect Trump, think they deserve.

Unfortunately, American consumers, including the millions of workers employed in steel-consuming industries, will be stuck with the bill.