Trump Officials: We Want to “Enforce the Laws” But Only Certain Ones 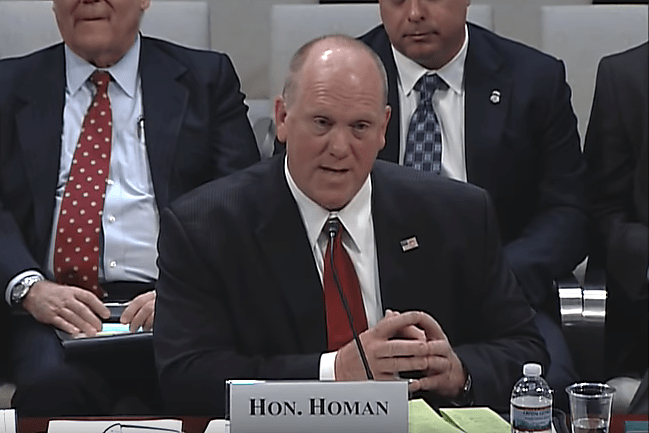 Testifying before Congress this week with the heads of the other two immigration agencies, Immigration and Customs Enforcement head Thomas Homan asserted that “no one on this panel is anti‐​immigrant,” claiming that while he “feels bad for some of these people,” they are just “enforcing the law that Congress enacted.”

Yet he and his copanelists spent much of the hearing arguing for not enforcing the law, but rather changing it to make it more anti‐​immigrant than it already is. His testimony repeatedly bemoaned “Congressional inaction” that requires him to enforce laws that allow, in his view, too many asylum seekers to apply for asylum in the United States.

Homan also doesn’t want to enforce the law that prohibits him from jailing women and children pending their asylum hearings and wants more money and authority to jail other immigrants as well. These are not the comments of a disinterested, passive “enforcer of the law,” but of a policy advocate who believes that current laws are too friendly to immigrants.

His copanelists were just as exuberant in their desire for nonenforcement. Customs and Border Protection chief Ronald Vitiello’s testimony told Congress that he doesn’t want to enforce the law that gives hearings to little children who arrive at the border by themselves from Central America. He said that he “remains committed to working with Congress to address these issues in support of the priorities of this Administration”—in other words, his priorities differ from current law.

No member of the administration was more hostile to enforcing current law than U.S. Citizenship and Immigration Services Director Francis Cissna. He was outraged that he cannot refer for criminal prosecution asylum seekers who have their applications denied. It’s not enough, in his view, for them to be denied safe haven and kicked out of the country. They should face jail time for filing what he believes are—but current law does not consider to be—“frivolous” applications.

Cissna came ready with a laundry list of complaints against current law. He commanded Congress to “immediately pass legislation” to fast‐​track deportations of women and children seeking asylum, to make it more difficult for people to be able to even apply for asylum in the first place, and then to revoke asylum to anyone who visits their home countries.

He complained that current law prohibits deporting “victims of gang violence,” which is just too “generous” in his view. “Someone only has to show that there is a ‘reasonable possibility’ of suffering persecution on account of a protected ground in order to qualify for asylum,” he lamented. All of these laws need to be changed, not enforced, he believes.

At one point, Cissna even endorsed legislation by Rep. Bob Goodlatte (R-VA) that would slash legal immigration to the United States by nearly 40 percent and kick out of line millions of legal immigrants who have been waiting, sometimes for decades, for the ability to come legally to the United States. He doesn’t want to enforce the law if it leads to more immigrants coming in.

This swath of policies are impossible to describe as anything other than anti‐​immigrant, and they have nothing to do with anything Congress has passed. They are a wish list of the most extreme version of the anti‐​immigrant agenda, targeting not only those in the United States without legal status, but also those who have it or wish to have it.

In a moment of eloquent incoherence, Cissna told the panel, “There is only so much we can do as a Department to enforce the rule of law when serious loopholes exist within current law.” In other words, we don’t want to enforce the law as it is right now, so change it. But he doesn’t want to change it in a way that makes it easier for people to follow the law, but rather makes it more difficult.

“Just enforce the law” is a mantra in favor of inaction, of making the status quo sacrosanct, but no one believes the status quo is perfect. Homan and his colleagues admitted as much. But they refuse to own up to the fact that their desire to not enforce current law is uniformly hostile to immigrants—legal or not. If that’s not “anti‐​immigrant,” what is?