Figure 1 shows the rapid and recent increase in all ICE criminal and administrative arrests. The number of arrests peaked in 2008 at 6,287 after several steady years of increases, but then declined during Obama’s presidency with a single blip in 2011.

Figure : All ICE Arrests at Worksites 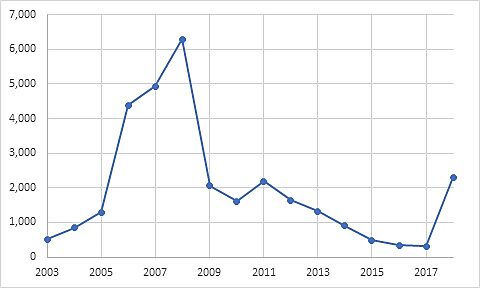 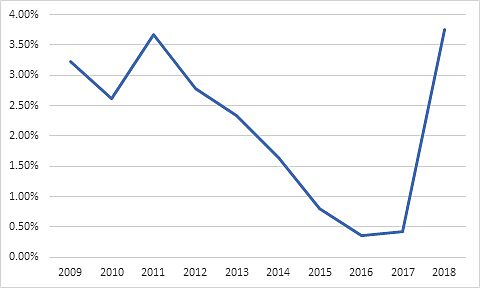 The I-9 worksite audit was amajor innovation in immigration enforcement unrolled during Obama’s administration, which Trump’s administration is using with alacrity (Figure 3). Although the number of worksite audits increased about 4.4-fold from 2017 to 2018, from 1,360 to 5,981, only a small fraction of all establishments were actually audited. The Business Dynamics Statistics (BDS) at the U.S. Census reports that there were more than 6.8 million business establishments in 2016, the last year for which data is available. Not all of those 6.8 million establishments have employees besides the founder and, since he doesn’t have to fill out an I-9 form, not all of them would be subject to audits. With the aid of a back of the envelope estimate, I assume that about 3.9 million of those establishments had more than one employee in 2016. Thus, it’s unlikely that the 5,981 ICE I-9 audits in FY2018 covered more than 0.15 percent of all business worksites. 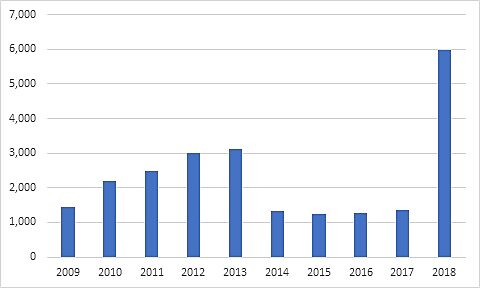 ICE clustered its I-9 audits by time in 2018. It sent out 5,278 (88 percent) of the 5,981 notices of inspection for the audits during the two periods of January 29 through March 30 and July 16 through July 20. Those big operations were meant to frighten illegal immigrants and their employers. Since ICE only audited about 0.15 percent of establishments, it has to rely on fear to increase compliance with immigration laws at worksites.

The Trump administration was supposed to reduce expensive economic regulation. In many other sectors of the economy, Trump has followed through on this promise. Immigration is the exception.