Investigators have concluded that the driver of the CTA train that crashed at O'Hare earlier this week slept through the stop. Moreover, she apparently had a record of falling asleep at work before. However, investigators also concluded that two back-up systems that should have stopped the train before it crashed even without a waking driver failed as well. 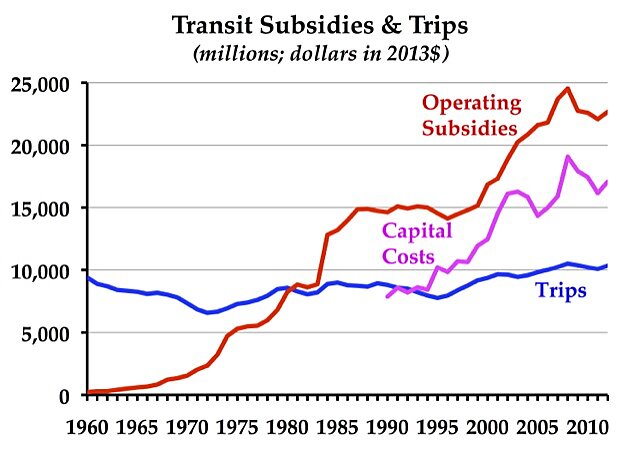 We've spent roughly $1 trillion on transit since 1970 for not much return. Capital spending before 1990 is not available, but probably followed a trajectory similar to operating subsidies (=op costs minus fares). Click image to download a spreadsheet with these and other data mentioned in this post.

Meanwhile, the American Public Transportation Association (APTA) defends its claim that recent ridership statistics represent a genuine "shift in American travel behavior." While it admits that per capita ridership has declined since 2008, it blames that on the recession. It prefers to go back to 1995, "because after that year, ridership increased due to the passage of the landmark ISTEA legislation and other surface transportation bills which increased funding for public transportation." Effectively, APTA argues that people will ride transit if you subsidize them enough, and so therefore subsidies should be increased still further.

(By the way, APTA responded to my statement that virtually all of the growth in ridership in 2013 took place in New York City, saying, "That statement is not true. . . . Many other systems across the country saw ridership gains last year." But I never said that every single transit system outside of New York declined, only that the sum total, minus New York, declined, which is easily verified from APTA's own data.)

APTA is correct that transit ridership bottomed out in 1995, at least according to its numbers. (Federal Transit Administration numbers are a little different and show ridership bottoming out in 1993.) But it is a stretch to say that subsidies are responsible for the growth in ridership since 1995 (or '93). Both operating and capital subsidies to transit have grown steadily since the mid 1960s, but ridership hasn't always followed.

Obviously, many things influence ridership other than subsidies. Employment, for example, has grown from 117 million jobs in 1995 to 136 million in 2013. Gas prices have grown from $1.64 (in today's dollars) in 1995 to $3.58 in 2013. Admittedly, neither of these explanations are, by themselves, satisfactory: transit trips per worker have grown by 19 percent since 1995, and gas prices didn't start increasing until 2000.

APTA's answer to why subsidies boosted ridership in the last two decades but didn't necessarily do it before then is found in its claim that "Cities that have invested in high frequency public transportation and transit-oriented development policies are experiencing significant ridership growth." But this simply isn't true: as I've previously noted, 2013 transit ridership declined in Charlotte, Dallas, Portland and several other cities that have invested in such transit.

For the sake of argument, let's say subsidies were responsible for much of the growth in transit ridership. Is it worth it? From 1995 to 2012, transit ridership grew by 35 percent. During that same period (after adjusting for inflation), operating subsidies grew by 56 percent and capital subsidies by 67 percent. In today's dollars, the average subsidy per trip in 1995 was $3.33, but the subsidy for the added trips in 2012 averaged $5.62.

Even if you think it is worth $5.62 to get one person out of their car for one trip, the changes we've seen can hardly be considered a major shift in American travel habits. The Census Bureau reports that 4.7 percent of people took transit to work in 2000. That's grown to 5.0 percent in 2012, which might sound good except it was 5.3 percent in 1990. (The Census Bureau has made annual surveys since 2005, but didn't do so in the 1990s.)

APTA looks at all these numbers and argues that, "We need to expand public transportation access so more people have travel choices." I look at the numbers and see that we have spent an awful lot of money to get some very minor changes. In order to get these minor changes, cities are not only spending billions of dollars on obsolete transportation systems, they are trying to impose huge lifestyle changes on Americans, such as by reducing the share of households in single-family homes from 65 percent to 41 percent, as Portland seeks to do.

Recently, a Michigan reporter asked me whether SMART--Detroit's suburban transit agency--was an efficient transit operator, as it says it needs a tax increase to keep going. I pointed out that its bus fares covered only 18 percent of bus operating costs in 2012, well below the industry average of 28 percent.

But even 28 percent is a pretty pathetic benchmark. What do we get for all these subsidies? We get transit systems that run nearly empty buses and trains much of the day so that, on average, they are no more energy efficient or climate friendly than driving. We get construction of expensive transit systems that cities like Chicago can't afford to maintain. We get highly paid workers who fall asleep on the job expecting that their passengers will be protected by back-up systems that fail because we didn't bother to maintain them.

Fundamentally, we get a system that's broken because no one is beholden to the customers whose fares cover, on average, a mere 25 percent of the costs. Instead, they cater to the politicians who allocate the other 75 percent to agencies based on political muscle and back room payoffs. (Does anyone think that their mayor wouldn't take bribes, or at least campaign contributions, from railcar manufacturers and contractors in exchange for their support for rail boondoggles?) Contrary to APTA's claims, the transit industry is in deep trouble and must be reformed by reducing, not increasing, subsidies so that transit agencies will be responsive to users, not politicians.