During his Ironman 21-hour speech, Sen. Ted Cruz read excerpts from Ayn Rand’s Atlas Shrugged, name-dropped “libertarians” at least six times, and yielded to Sen. Rand Paul, who invoked Frederic Bastiat’s “What is Seen and Unseen,” a favorite among libertarians.

Ted Cruz, who retained remarkable composure over the long night, seems in all things deliberate. Political leaders seem to have become more comfortable talking about libertarians, even identifying themselves as such. Libertarians may have reached a tipping point within the Republican Party.

Last week, a FreedomWorks study on public opinion found that libertarian views within the Republican Party are at the highest point in a decade, today representing 41 percent of Republican voters. This is a strong claim. It’s worth explaining the methodology behind the study, as libertarian views gain more and more attention in the press.

As David Boaz and I have noted in our two studies on the Libertarian Vote, and ebook with Emily Ekins, Gallup has tracked “libertarian” beliefs since 1993 using a combination of two questions on the role of government:

Gallup defines libertarians as those who think government is doing “too many things” and should not “promote traditional values.”

In the chart below the jump, Gallup data show a 19 percentage point increase in libertarian views among Republicans and Republican leaning independents in the decade between 2002 and 2012. In 2002, libertarians represented 15 percent of Republicans; in 2012, 34 percent. 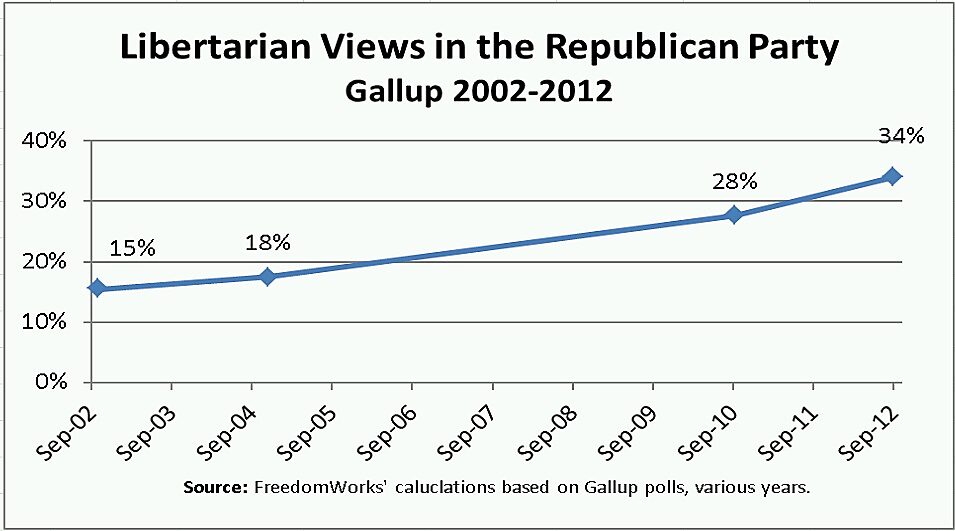 We define libertarians as those who say the “less government the better” and who “agree” we should be “tolerant” of moral standards “different from our own.”

In the chart below, ANES data show a nine percentage point increase in libertarian views among Republicans and Republican leaning independents between 2000 and 2012. In 2000, libertarians represented 26 percent of Republicans; in 2012, 35 percent. 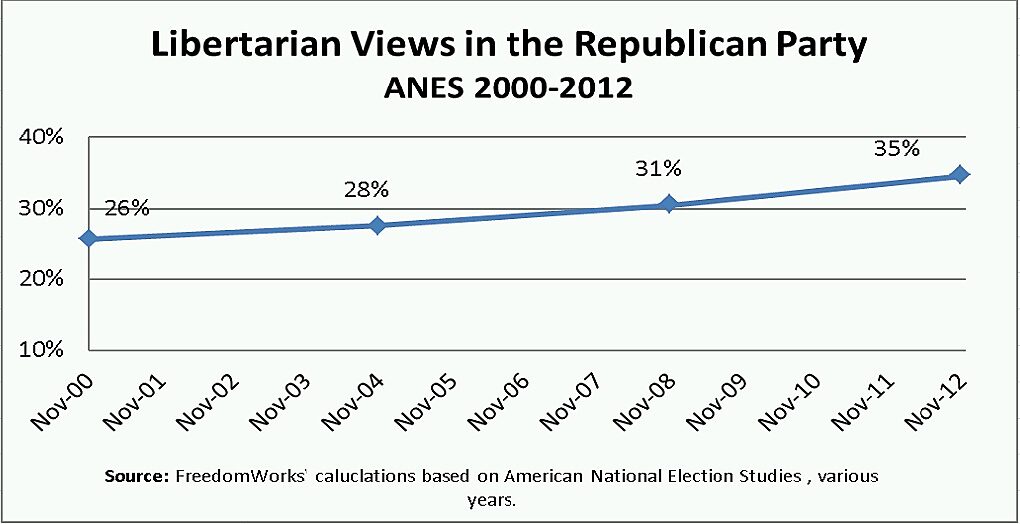 Finally, we added similar questions to a national poll FreedomWorks commissioned in August to see what percentage of Republicans hold libertarian views today. (Note: FreedomWorks surveyed only registered voters, whereas calculations for Gallup and ANES are for all Americans).

We define libertarians as those who favor “smaller government” and think government should not promote “traditional values.” Using this method, FreedomWorks data show that 41 percent of Republicans and Republican leaning independents are libertarian today.

Two separate data sources, Gallup and ANES, show the same trend: that libertarian views are at the highest point in a decade. And three point estimates for libertarians in 2012 and 2013—Gallup, ANES, and FreedomWorks—find a similar level of libertarian views between 34 and 41 percent.

Of course, as I’ve have noted previously, not all these libertarians self-identify as such and many don’t know the word. But even that seems to be changing, and it’s not just Ted Cruz.

Sen. Rand Paul calls himself a “libertarian-leaning Republican.” Glenn Beck now considers himself libertarian, saying “I’m a lot closer to Penn Jillette than I am to Chuck Hagel.” Matt Drudge recently tweeted his frustration with Republicans on Syria, saying it’s now “authoritarian vs. libertarian.” According to FreedomWorks’ poll, only 10 percent of Republicans “don’t know” the word libertarian, compared to 27 percent nationally.

The data confirm that libertarian views may well have reached a tipping point in the Republican Party.