The final guidelines for the Administration’s “Race to the Top” education reform program have now been released. It’s a system that stimulates competition between the states to produce results that the customer (Secretary Duncan) wants, using financial incentives. Déjà vu, anyone?


It’s as though Arne Duncan recognizes the merits of free market forces, but rather than faithfully reproducing them in the field of education, he’s decided to give us his own reimagining of them.


Here’s the problem. There are already 25 years of scientific research comparing real free education markets to traditional public school systems. It overwhelmingly finds that markets do a better job of serving families. But we have no evidence at all that Secretary Duncan’s newly invented system will do anyone any good.


So why go to all this trouble to reinvent the wheel, when the Secretary’s own Department of Education has found that an on‐​going federal private school choice program—which gets much closer to a genuine education marketplace—is raising students’ reading ability by two grade levels after just 3 years of participation?

Yesterday, I offered the Fordham Foundation’s Andy Smarick an answer to a burning question: What is the proper federal role in education? It was a question prompted by repeatedly mixed signals coming from U.S. Secretary of Education Arne Duncan about whether Washington will be a tough guy, coddler, or something in between when it comes to dealing with states and school districts. And what was my answer? The proper federal role is no role, because the Constitution gives the feds no authority over American education.


Not surprisingly, Smarick isn’t going for that. Unfortunately, his reasoning confirms my suspicions: Rather than offering a defense based even slightly on what the Constitution says, Smarick essentially asserts that the supreme law of the land is irrelevant because it would lead to tough reforms and, I infer, the elimination of some federal efforts he might like.


While acknowledging that mine is a “defensible argument,” Smarick writes that he disagrees with it because it “would presumably require immediately getting rid of IDEA, Title I, IES, NAEP, and much more.” He goes on to assert that I might “argue that doing so is necessary and proper because it’s the only path that squares with our founding document, but policy‐​wise it is certainly implausible any time soon.” Not far after that, Smarick pushes my argument aside and addresses a question to “those who believe that it’s within the federal government’s authority to do something in the realm of schools.”


OK. Let’s play on Smarick’s grounds. Let’s ignore what the Constitution says and see what, realistically, we could expect to do about federal intervention in education, as well as what we can realistically expect from continued federal involvement.


First off, I fully admit that getting Washington back within constitutional bounds will be tough. That said, I mapped out a path for doing so in the last chapter of Feds In The Classroom, a path that doesn’t, unlike what Smarick suggests, require immediate cessation of all federal education activities. Washington obviously couldn’t be pulled completely out of the schools overnight.


Perhaps more to Smarick’s point, cutting the feds back down to size has hardly been a legislatively dead issue. Indeed, as recently as 2007 two pieces of legislation that would have considerably withdrawn federal tentacles from education — the A‑PLUS and LEARN acts – were introduced in Congress. They weren’t enacted, but they show that getting the feds out of education is hardly a pipe dream. And with tea parties, the summer of townhall discontent, and other recent signs of revolt against big government, it’s hardly out of the question that people will eventually demand that the feds get out of their schools.


Of course, there is the other side of the realism argument: How realistic is it to think that the federal government can be made into a force for good in education? It certainly hasn’t been one so far. Just look at the following chart plotting federal education spending against achievement, a chart that should be very familiar by now.

In a recent New York Times column (“The Uneducated American”), Paul Krugman writes that, “for the past 30 years our political scene has been dominated by the view that any and all government spending is a waste of taxpayer dollars.” As a result, Krugman continues, U.S. education has been “neglected” and “has inevitably suffered.”


Readers who put their trust in Krugman might thus conclude that per pupil spending has stagnated or declined. In reality, as the chart below reveals, it has more than doubled since 1970, after adjusting for inflation.


Paul Krugman may not be an “uneducated American,” but he’s certainly a badly misinformed one. 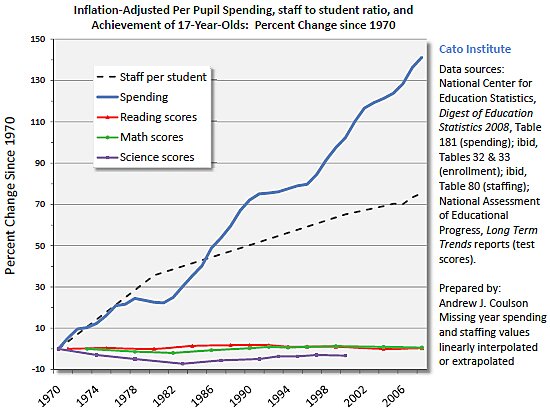 Much more troubling is the fact that Krugman and the Times are spreading this misinformation on a grand scale. And that got me thinking about Jon Stewart. When Time magazine recently asked Americans to name their most trusted newscaster, the comic and Daily Show host won in a landslide. Many pundits have taken this as a sign of the Apocalypse, worrying that so many Americans are getting their facts from a presumptively unreliable source. But is the Daily Show really less reliable than Paul Krugman and the New York Times?


To find out how they stack up on this particular question, I Googled the Daily Show’s website for any discussion of education spending. The most relevant hit was an exchange in the show’s on‐​line forum. In it, a commenter claims that spending per pupil has risen by a factor of 10 since 1945, after adjusting for inflation. That’s not too far off the mark. The actual multiple is just under 8. So folks who get their facts from the Daily Show’s website will be better informed on this subject than those who trust the Nobel Prize winning New York Times economist.


Media elites have been wringing their hands over the collapse in public demand for their products, over the two thirds of Americans who now doubt their credibility, and over the fact that more people now get their information from the Daily Show’s website than the New York Times’s.


Perhaps the media might attract more readers and rebuild trust if they were to stop publishing material less reliable than the blog discussions on a comedy show’s website. Just a thought.

In a response to my post this morning, Charles Murray remains unconvinced that changes to our school system could result in dramatic improvements in educational outcomes.


He asks to see the scholarly study showing that a school has miraculously boosted achievement above the norm. In one way, this hurdle is too low, and in another it’s too high.


If we could only point to a single study of a single school, it wouldn’t instill much confidence in the generalizability of the phenomenon. A consistent pattern of scholarly results is necessary for that. On the other hand, asking for “miraculous” improvement is a needlessly high standard. My disagreement is with Murray’s earlier, lower threshold claim that: “reforms of the schools can never do more than produce score improvements at the margin.”


Let’s call a marginal improvement an increase of less than .15 standard deviations above the current mean (typically considered a “small” effect in the social sciences). Taking that as our litmus test, is there a consistent pattern of scholarly evidence that better school system design can boost achievement by more than .15 standard deviations? Yes.

I have been trying for years to make people understand that a single system of government schools is fundamentally at odds with American values, especially individual liberty and equal treatment under the law. New York City Mayor Michael Bloomberg, in opposing a move to let city public schools close for Muslim holidays as they do for Christian and Jewish holidays, recently made my point in one, simple sentence:

One of the problems you have with a diverse city is that if you close the schools for every single holiday, there won’t be any school.

Exactly. So which religions, and which people, will get to be more equal than others, Mr. Mayor?


With universal school choice, we wouldn’t have to grapple with such terrible questions.

H. L. Mencken described puritanism as “the haunting fear that someone, somewhere, may be happy.”


The new puritanism is the fear that someone, somewhere, may be learning.


The Minneapolis Star Tribune has a story today in which public school educationalists wring their hands over the fear that suburban whites may be getting a good education in charter schools. This, somehow, is perceived to be a bad thing for urban minority kids.


What is bad for any child is a paucity of high quality education options from which to choose. The focus of policymakers should be on ensuring that more and better education options are constantly coming within reach of all children, regardless of the contents of their parents’ wallets, the pigmentation of their skin, or their ethnic background. This, the research shows, can most reliably be achieved by harnessing the freedoms and incentives of a competitive education marketplace.


Can the charter school system create such a marketplace? Can it relentlessly spawn new excellent schools and scale up the established ones to reach a mass audience? For a discussion of those questions, drop by Cato on October 2nd.

Cognitive scientist Dan Willingham has a helpful column on the WaPo’s “Answer Sheet” blog. In it, he notes that DC Public Schools advises its employees to teach to students’ “diverse learning styles” (e.g. “auditory learners,” “visual learners,” etc.) despite the fact that research shows these categories are pedagogically meaningless.


But what really grabbed my attention was this comment: “a misunderstanding of a pretty basic issue of cognition is a mistake that one does not expect from a major school system. It indicates that the people running the show at DCPS are getting bad advice about the science on which to base policy.”


As cognitive scientists have been collecting and analyzing evidence on “learning styles” for generations, social scientists and education historians been doing the same for school systems. What these latter groups find is that it is perfectly normal for public school districts to be unaware of or even indifferent to relevant research and to make major pedagogical errors as a result. Furthermore, there is no evidence that large districts are any better at avoiding these pitfalls than smaller ones. If anything, the reverse is true.


Not only are such errors to be expected of public school systems, we can actually say why that is the case with a good degree of confidence: public schooling lacks the freedoms and incentives that, in other fields, both allow and encourage institutions to acquire and effectively exploit expert knowledge.


Districts such as Washington DC can persist year after year with abysmal test scores, abysmal graduation rates, and astronomical costs. That is because they have a monopoly on a vast trove of government k‑12 spending. In the free enterprise system, behavior like that usually results in the failure of a business and its disappearance from the marketplace. So, in the free enterprise sector, it is indeed rare to see large institutions behaving in such a dysfunctional manner, because it would be difficult if not impossible for them to grow that big in the first place. Long before they could scale up on that level, they would lose their customers to more efficient, higher quality competitors.


So if we want to see the adoption and effective implementation of the best research become the norm in education, we have to organize schooling the same way we organize other fields: as a parent‐​driven competitive marketplace.