In a new Washington Post op‐​ed, University of Virginia Curry School of Education dean Robert Pianta offers an assertion that is shocking, at least if you follow education policy: “public funding for schools has actually decreased since the late 1980s, adjusting for constant dollars.” It is shocking because federal, inflation‐​adjusted data show nothing even close to that, as you can see in the chart below. 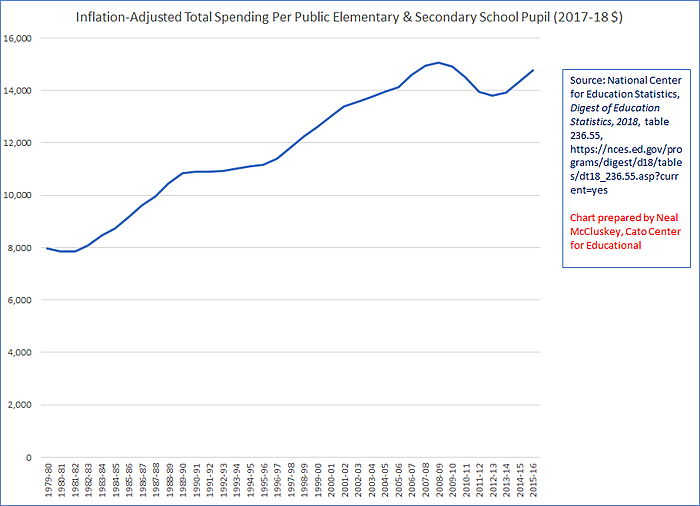 This spending data is well‐​known among wonks, and while it is open to some interpretation, I can find nothing supporting Pianta’s claim. His piece includes a link to a U.S. Commission on Civil Rights report, but I found nothing in it backing up his assertion. Bruce Baker of Rutgers, who is a supporter of Pianta’s argument that spending more on education would make a big difference, has also failed to see the basis for his claim.

Of course, it is possible I am missing something, and I hope Pianta will clarify the assertion. But until he does, the play stands as called: inflation‐​adjusted K‑12 spending has risen substantially since the 1980s.

The annual Education Next gauge of public opinion on numerous education issues is out, and as always it offers lots to contemplate, including special questions this year on the “Trump effect.” I won’t hit everything, just what I see as the highlights.


The poll’s headline grabber is a big drop in support for charter schools, public schools run by ostensibly private entities but subject to many public school controls, especially state standards and testing. When people with neutral opinions were removed, 52 percent of respondents approved of “formation” of charters — that word likely made some difference — down from a peak of 73 percent in 2012. With neutral answers included, only 39 percent of the general public supported charters. 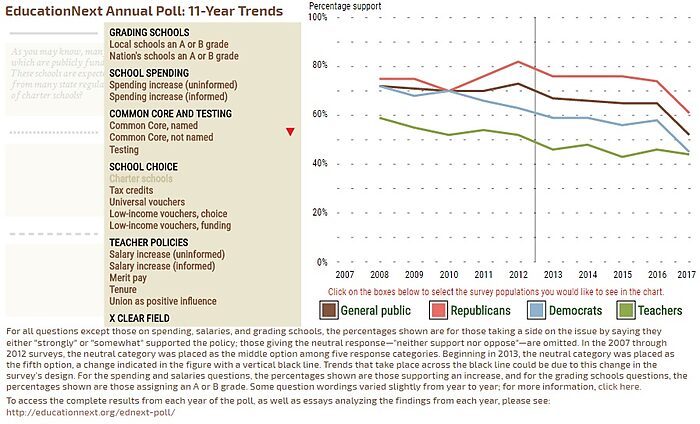 The good news is that support for private school choice programs — superior to charters because they offer access to far wider options, including religious schools — saw upticks. Scholarship tax credits remain the choice champ, with support (absent neutral respondents) rising from 65 percent to 69 percent. With neutrals, support stood at 55 percent of the general public. For vouchers, a lot depends on question wording, but without a loaded emphasis on “government funds,” support (minus neutrals) stood at 55 percent, up from 50 percent the previous year. With neutrals, support was at 45 percent, with 37 percent opposing. Education savings accounts—basically, money parents can use not just for tuition, but other education expenses like tutoring or buying standalone courses — garnered only 37 support from the general public, but the concept is pretty new and people may just not have wrapped their heads around it yet. 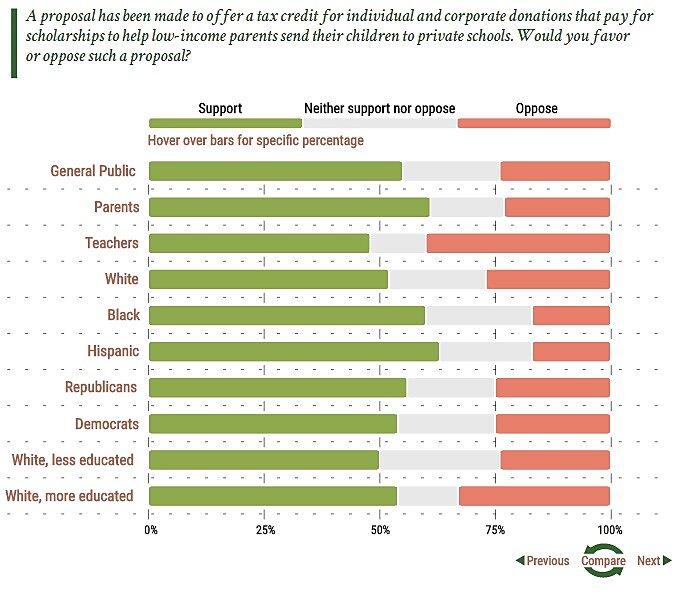 Why the big drop in charter support but improved backing of private school choice? As always, wording, question order, and other artifacts of the poll itself matter, but assuming those aren’t the major causes of the results, perhaps the answer is that charters, as a compromise between empowering parents and maintaining government control, have traditionally tended to have the highest profile bipartisan support of the various choice mechanisms. As a result of Trump‐​driven polarization, perhaps they have also had the most visible schisms, maybe casting a more negative light on them. Or maybe people have started to perceive, as Education Secretary Betsy DeVos borrowed from Rick Hess to warn, charters are becoming “the Man” they were supposed to replace.

A lot of well-intentioned people think it is not enough for families to be able to choose schools. They have to choose “good” schools. Those people often do not think private school choice programs that give parents a lot of control over which schools they select are up to par. Fine. But just because you don’t like something doesn’t make it a “clear flop.”

Writing at The 74, Richard Whitmire warns that we should beware Trumps bearing school choice gifts. He argues that President-elect Trump’s proposal to spend $20 billion on school choice could be dangerous not because of, say, federal rules that might be attached to unconstitutional largesse, but because the money might not be restricted to “great” schools. “Great,” presumably, should be defined by legislators or bureaucrats. After all, you don’t want to replicate the Milwaukee voucher program:

Those in the school reform movement learned the hard way that choice alone does not produce more seats in great schools. If that were the case, we’d all be praising the early voucher program in Milwaukee and the widespread charters in Ohio and Michigan. But in all those cases, choice alone produced nothing.

In Milwaukee, for example, which I visited repeatedly while researching my book On the Rocketship, about the creation of one best-in-class charter network, the more-than-two-decade-old voucher experiment proved to be a clear flop. (Note that I didn’t say unpopular. Who objects to free tuition for their kid’s parochial schools?)

The latest 8th grade U.S. history, civics, and geography results from the National Assessment of Educational Progress – the so‐​called Nation’s Report Card – have been released, and as usual, things seem bleak: only 18 percent of students scored proficient in U.S. history, 23 percent in civics, and 27 percent in geography. These kinds of results, however, should be taken with a few salt grains because we can’t see the full tests, and the setting of proficiency levels can be a bit arbitrary. Also, we don’t…


Oh, the heck with all that. As a fan of school choice, just tell me if private schools did better!


What have they found? Controlling for various student characteristics and other factors, private schools beat traditional publics in terms of political knowledge, voluntarism in communities, and other socially desirable outcomes. Why?


There may be many possible reasons, but at least one seems to be intimately connected to choice: autonomous schools select their own curricula, and families willingly accept it when they choose the schools. That means chosen schools can more easily teach coherent U.S. history and civics than can public schools, which often face serious pressures to teach lowest‐​common‐​denominator pabulum lest conflict break out among ideologically and politically diverse people. Perhaps ironically – though not if you understand how a free society works – by not being public, private schools may actually serve the public better.


So no, you can’t conclude a lot from the latest NAEP scores. But that doesn’t mean they can’t point you in the right direction.

There’s a lot of debate right now about whether conservatives (I don’t know if anyone thinks libertarians can be reached) should support current No Child Left Behind reauthorization efforts. The “support this” argument is that bills in the House and Senate are not ideal because they would keep a major federal role in education, but they would end many bad things in NCLB and conservatives should take what they can get politically. But we just got a terrific illustration of what happens when you cut off just a few jellyfish tentacles: they grow back.

Yesterday, an amendment was passed in the markup of the Senate bill that would restore the 21st Century Community Learning Centers program. What is the 21st CCLC? A Clinton Era program that furnishes funds – $1.2 billion in FY 2015 – for before- and after-school activities and summer programs. The problem: It appears to be a failure. As I discussed a few years ago, federal studies of the program found it not only largely ineffectual, but possibly even a negative influence. As a 2005 report summarized:

It isn’t just Cato folk who’ve stumbled on the research. The Brookings Institutions’ Mark Dynarski just laid into the 21st CCLC last month, writing that evaluations “reported on how the program affected outcomes. In a series of reports released between 2003 and 2005…the answers emerged: the program didn’t affect student outcomes. Except for student behavior, which got worse.”

Professor Paul Campos, something of an antagonist of our higher education system, caused a bit of ruckus last week when he wrote in the New York Times that skyrocketing college prices cannot be blamed on falling state appropriations to schools. The reality, of course, is that declining public support could explain some of the increase in prices (though not much at private colleges) but it seems unlikely it would explain all of the increases.

Let’s look at the trends.

First, note that overall state and local support, at least for general operations at public institutions, is indeed down over the last several years. Using data from the latest State Higher Education Finance report – released just yesterday – total state and local support for general operations at public colleges, adjusted for inflation using a higher education-specific index, fell from a peak of $83 billion in 2008 to $73 billion in 2014, a pretty big drop. That said, in 1989 total spending was only $64 billion, which means it has risen since then.

In a Washington Post op‐​ed laying out his thoughts on the federal role in education, Gov. Jeb Bush wrote, “We are long overdue in setting the lines of authority so clearly.” Alas, the lines he offered would furnish just the sort of “clarity” that has led to nearly limitless federal control over schooling without any meaningful evidence of lasting improvement.


The true heart of what Bush wrote was not his declaration about setting lines, but the three justifications he offered for federal intervention. Washington, he wrote:

should work to create transparency so that parents can see how their local schools measure up; it should support policies that have a proven record; and it should make sure states can’t ignore students who need extra help.

All of this is what has gotten us to the de facto state of federal control we are currently in:

Quite simply, in setting his lines, Gov. Bush set no lines. Thankfully for him, lines of federal authority have already been drawn. Indeed, they were set centuries ago: the Constitution gives the federal government no authority to impose transparency, offer help, or anything other than prohibit discrimination by state and local governments and govern federal lands.


As I’ve noted before, obeying the Constitution would save folks like Gov. Bush a lot of reinventing work. More importantly, it would save everyone else expensive, ineffectual trouble.