Hudson Institute historian and political scientist John Fonte has written that immigrants are not patriotically assimilating.  Fonte blames this supposed development on many factors but frequently credits changes in public school curricula away from the nation building Americanization Movement of the Progressive Era toward a multicultural ethos today.  In previous posts, I have challenged Fonte’s claims about a lack of patriotic assimilation amongst today’s immigrants and have shown that his claims about the success of the Americanization Movement are based on anecdotes and that there as many that show it actually slowed assimilation.

One common criticism of immigrants is that they could undermine American institutions, weakening them so much that future economic growth will decrease so that the long run costs of liberalization are greater than the benefits. As I’ve written before this criticism doesn’t hold up to empirical scrutiny but a new line of attack is that immigrant trust levels could weaken productivity. I decided to look at trust variables in the General Social Survey (GSS), a huge biennial survey of households in the United States, to see if immigrants and their children are less trusting than other Americans. The results were unexpected. 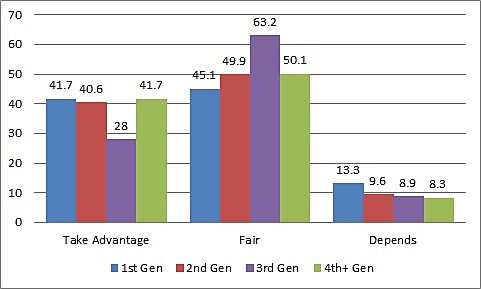 
The third variable examined was “helpful,” which asks: “Would you say that most of the time people try to be helpful, or that they are mostly just looking out for themselves?” The same pattern emerged – the first and second generations were more similar to the fourth‐​plus generation. The second generation is nearly identical to the fourth‐​plus generation. The third generation was most likely to say that most people were helpful and least likely to say that people look out for themselves. Again, the third generation is the trust anomaly, not the immigrants. 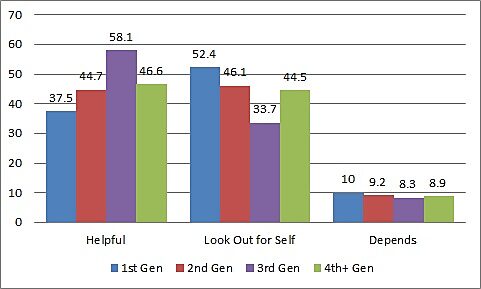 
The differences between immigrants, their children, and fourth‐​plus generation Americans are small when it comes to levels of trust, opinions of fairness, and whether people are helpful. It’s hard to see how these small differences could comprise the micro foundations of an institution‐​based argument against liberalized immigration. The question is not why native‐​born Americans trust and immigrants don’t, it’s why do third generation Americans trust so much while all other Americans and immigrants do not?

The potential negative impact of immigrants on American political and economic institutions is the best argument against liberalized immigration and the economic, social, national security, and criminal objections are not convincing. Michael Clemens and Lant Pritchett dig into this argument, which they call the “Epidemiological Case for efficient migration restrictions,” and find it mostly wanting (their paper is the best I’ve read in a long while). I’ve co‐​written an academic journal article, Cato policy paper, and other work about how immigration could affect institutions. There is more evidence that immigration improves institutions than that it worsens them although there is still much work to be done on this issue and questions remain.


But there is evidence that emigration improves a source country’s institutions. Fredrik Segerfeldt summarizes some of the evidence in his new book for the Adam Smith Institute in the UK. In Chapter 6 of his book, Segerfeldt observes:

Mexican migrants play an important role in shaping political atti­tudes in the country, both through social remittances and after returning home. Political participation increases, democratic com­petition intensifies, it becomes more difficult for leading members of the party in power to enrich themselves and the chance that the rul­ing coalition will retain power decreases. In short, Mexico’s exodus makes it more democratic.


Although much of the research above deals with Mexico, there are other results indicating that emigration can strengthen democracy. In a macro study of a large number of poor countries, economists find that emigration increases both democracy and economic freedom in the sending country.

How does emigration improve Mexican economic and political institutions? By breaking up cronyist and interventionist political arrangements:

Emigration can also help to break up or at least weaken governance based on patronage. In such countries voters tend to vote for the rul­ing party, because otherwise they risk losing the benefits that the power distributes. Entire communities will be dependent on the rul­ing party, which impairs democracy. But when people in a commu­nity receive income that is not from the state or the ruling party, citi­zens become more independent and can therefore vote for the oppo­sition if they want to. In Mexico, remittances reduce the support for the PRI, the party which, with the help of patron‐​client methods, managed to retain control of the country during most of the 20th cen­tury (between 1929 and 2000).


Migration and remittances may also be a way to break up old hierar­chies based on class and ethnicity. In San Pedro Pinula in Guatemala, for example, residents of the Mayan people, with the help of both returning migrants and remittances, have slowly but surely been able to challenge the ethnic underclass role they had for five centu­ries. In the oases of southern Morocco, the Haratin, poor black, land­less workers, have enhanced their status thanks to remittances from abroad.

Segerfeldt’s summary of that research can help explain the important finding by Joshua C. Hall that the ability to emigrate is correlated with improvements in source country economic freedom:

Exitability, a variable created by Brown (2014) to capture how easy it is for citizens to “vote with their feet” is related to the change in economic freedom from 1980 to 2010 in a statistically significant manner across all specifications. This provides some indirect evidence to the importance of “exit” versus “voice” with respect to the question of institutional reform.

Emigration benefits governance in sending countries, increasing the returns from liberalized immigration policies in the developed world. This is an exciting time to be working on how immigrants affect economic and political institutions.

A Washington Post article recently highlighted the impressive but uneven progress that Africa has made in its struggle against poverty. The article looked at questions pertaining to material wellbeing, including “the number of times that an average family had to go without basic necessities.” On that measure, Cape Verde saw the most rapid improvement. And so the article asks, “What did Cape Verde do right?”


Cape Verde’s superior infrastructure, the Washington Post explains, is partly responsible for that country’s economic progress. Surely that cannot be the full answer. The United States did not have an interstate road network till the Eisenhower Administration – decades after the United States became the richest and most powerful country in the world. Similarly, Germany was the most powerful and richest country in Europe a long time before constructing its famous autobahns.

In fact, it is Cape Verde’s policies and institutions that we should look to as reasons for that country’s superior performance relative to, say, Liberia, where poverty increased the most – according to the Washington Post. According to the Center for Systemic Peace, Cape Verde is a democracy. Liberia, in contrast, is far behind.