My crusade against the border-adjustable tax (BAT) continues.

In a column co-authored with Veronique de Rugy of Mercatus, I explain in today's Wall Street Journal why Republicans should drop this prospective source of new tax revenue.

...this should be an opportune time for major tax cuts to boost American growth and competitiveness. But much of the reform energy is being dissipated in a counterproductive fight over the “border adjustment” tax proposed by House Republicans. ...Republican tax plans normally receive overwhelming support from the business community. But the border-adjustment tax has created deep divisions. Proponents claim border adjustability is not protectionist because it would automatically push up the value of the dollar, neutralizing the effect on trade. Importers don’t have much faith in this theory and oppose the GOP plan.

Much of the column is designed to debunk the absurd notion that a BAT is needed to offset some mythical advantage that other nations supposedly enjoy because of their value-added taxes.

Proponents of the border-adjustment tax also are using a dodgy sales pitch, saying that their plan will get rid of a “Made in America Tax.” The claim is that VATs give foreign companies an advantage. Say a German company exports a product to the U.S. It doesn’t pay the American corporate income tax, and it receives a rebate on its German VAT payments. But an American company exporting to Germany has to pay both—it’s subject to the U.S. corporate income tax and then pays the German VAT on the product when it is sold.

Sounds persuasive, at least until you look at both sides of the equation.

Here's a visual depiction of how the current system works. I include the possibility that that German products sold in America may also get hit by the US corporate income tax (if the German company have a US subsidiary, for instance). What's most important, though, is that neither American-produced goods and services nor German-produced goods and services are hit by a VAT. 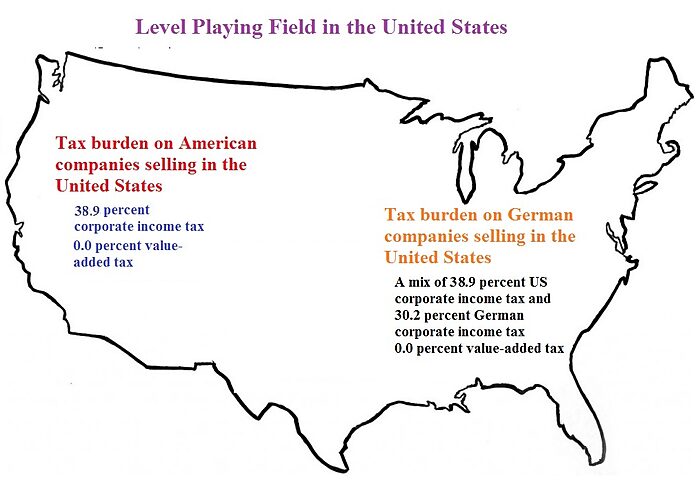 Based on the title of this column, you may think I'm going to write about oppressive IRS behavior or punitive tax policy.

Those are good guesses, but today's "brutal tax beating" is about what happens when a left-leaning journalist writes a sophomoric column about tax policy and then gets corrected by an expert from the Tax Foundation.

The topic is the tax treatment of executive compensation, which is somewhat of a mess because part of Bill Clinton's 1993 tax hike was a provision to bar companies from deducting executive compensation above $1 million when compiling their tax returns (which meant, for all intents and purposes, an additional back-door 35-percent tax penalty on salaries paid to CEO types). But to minimize the damaging impact of this discriminatory penalty, particularly on start-up firms, this extra tax didn't apply to performance-based compensation such as stock options.

In a good and simple tax system, which taxes income only one time (including business income), the entire provision would be repealed.

But when Alvin Chang, a graphics reporter from Vox, wrote a column on this topic, he made the remarkable claim that somehow taxpayers are subsidizing big banks because the aforementioned penalty does not apply to performance-based compensation.

...the government doesn’t tax performance-based pay for...any...top bank executive in America. Unlike regular salaries — where the government takes out taxes to pay for Medicare, Social Security, and all other sorts of things — US tax code lets banks deduct the big bonuses they give to their executives. ... The solution most Americans want is to either heavily tax CEO pay over a certain amount, or to set a strict cap on how much CEOs can make, relative to their workers. As long as this loophole is open, though, it makes sense for banks to continue paying executives these huge sums. ..for now, taxpayers are still ponying up to help make wealthy bankers even wealthier, because the US tax code encourages it.

Since Mr. Chang is a graphics reporter, you won't be surprised that he included several images to augment his argument.

Such as the assertion that there are trillions of dollars of spending cuts in plans that actually increase spending. How do you have a debate with people who don't understand math?

Or the oft-repeated myth that the Reagan tax cuts for the rich starved the government of revenue. How can you have a rational discussion with people who don't believe IRS data?

And let's not overlook my personal favorite, which is blaming so-called tax havens for the financial crisis, even though places such as the Cayman Islands had nothing to do with the Fed's easy-money policy or with Fannie Mae and Freddie Mac subsidies.

These are all example of why my hair is turning gray.

But I'll soon have white hair based on having to deal with the new claim from European bureaucrats that countries are guilty of providing subsidies if they have low taxes for companies.

I'm not joking. This is basically what's behind the big tax fight between Apple, Ireland, and the European Commission.

I have a love-hate relationship with corporations.

On the plus side, I admire corporations that efficiently and effectively compete by producing valuable goods and services for consumers, and I aggressively defend those firms from politicians who want to impose harmful and destructive forms of taxes, regulation, and intervention.

On the minus side, I am disgusted by corporations that get in bed with politicians to push policies that undermine competition and free markets, and I strongly oppose all forms of cronyism and coercion that give big firms unearned and undeserved wealth.

With this in mind, let's look at two controversies from the field of corporate taxation, both involving the European Commission (the EC is the Brussels-based bureaucracy that is akin to an executive branch for the European Union).

First, there's a big fight going on between the U.S. Treasury Department and the EC. As reported by Bloomberg, it's a battle over whether European governments should be able to impose higher tax burdens on American-domiciled multinationals.

The U.S. is stepping up its effort to convince the European Commission to refrain from hitting Apple Inc. and other companies with demands for possibly billions of euros... In a white paper released Wednesday, the Treasury Department in Washington said the Brussels-based commission is taking on the role of a “supra-national tax authority” that has the scope to threaten global tax reform deals. ...The commission has initiated investigations into tax rulings that Apple, Starbucks Corp., Amazon.com Inc. and Fiat Chrysler Automobiles NV. received in separate EU nations. U.S. Treasury Secretary Jacob J. Lew has written previously that the investigations appear “to be targeting U.S. companies disproportionately.” The commission’s spokesman said Wednesday that EU law “applies to all companies operating in Europe -- there is no bias against U.S. companies.”

If you get into the weeds of tax policy and had a contest for parts of the internal revenue code that are "boring but important," depreciation would be at the top of the list. After all, how many people want to learn about America's Byzantine system that imposes a discriminatory tax penalty on new investment? Yes, it's a self-destructive policy that imposes a lot of economic damage, but even I'll admit it's not a riveting topic (though I tried to link it to popular culture by using ABBA as an example).

In second place would be a policy called "deferral," which deals with a part of the law that allows companies to delay an extra layer of tax that the IRS imposes on income that is earned - and already subject to tax - in other countries. It is "boring but important" because it has major implications on the ability of American-domiciled firms to compete for market share overseas.

Here's a video that explains the issue, though feel free to skip it and continue reading if you already are familiar with how the law works.

The simple way to think of this eye-glazing topic is that "deferral" is a good policy that partially mitigates the impact of a bad policy known as "worldwide taxation."

I'm still capable of being shocked when other people make outlandish assertions.

Like the policy wonk who claimed that capitalism is actually coercion, even though free markets are based on voluntary exchange. Or the statist columnist who argued people aren't free unless they're entitled to other people's money, even though that turns some people into unfree serfs.

Here's another example of upside-down thinking. It deals with the "inversion" issue, which involves American-chartered companies choosing to redomicile overseas.

A column in the Huffington Post implies that Pfizer is some sort of economic traitor for making a sensible business decision to protect the interests of workers, consumers, and shareholders.

Pfizer...wants to turn its back on America by claiming to be an Irish company through an offshore merger, giving it access to Ireland’s low tax rates. The change would only be on paper. The company would still be run from the United States, enjoying all the benefits of being based in America—such as our taxpayer-supported roads, public colleges, and patent protections—without paying its part to support them.

There's a remarkable level of inaccuracy in that short excerpt. Pfizer wouldn't be claiming to be an Irish company. It would be an Irish company. And it would still pay tax to the IRS on all U.S.-source income. All that changes with an inversion is that the company no longer would have to pay tax to the IRS on non-U.S. income. Which is money the American government shouldn't be taxing in the first place!