Americans have lately been debating the tradeoffs we face as the global poor rise. Their gains have been enormous and unprecedented. And yet the American working class has struggled to better itself even as conditions have improved for most others: 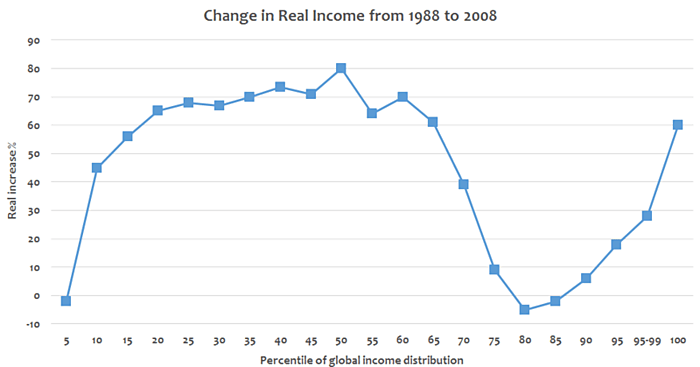 
Percentiles 80–95 contain many from the relatively rich countries’ lower‐​income classes; there are a lot of Americans in there. Other factors may be at work, but let’s say for the sake of argument that the gains by the global poor have on balance harmed at least some of them.


So why is this happening? Is it part of some other nation’s malicious plan? Is it China, perhaps? Or India? Or did we inadvertently do it to ourselves, through bad trade agreements or “soft” foreign policy?


It’s natural to want to make the story about us, or our actions, or a villain who threatens us. Those sorts of explanations are politically useful; they suggest that the right leader can get us out of the mess we’re in.


But maybe the correct explanation isn’t about us at all. One way to see this is to ask a slightly different question: Why is the Great Global Enrichment happening right now? Why didn’t it happen in the 1960s? It happened in the 1960s in Japan, after all. It presumably could have happened elsewhere too. So why not?

Over the years, President Obama has made some statements that indicate a rather statist mindset.

Now he may have added to that list during a recent speech in Argentina. Check out this excerpt from a report in the Daily Caller.

President Barack Obama downplayed the differences between capitalism and communism, claiming that they are just “intellectual arguments.” ...Obama said..."I think for your generation, you should be practical and just choose from what works.”

It's hard to object to the notion that people should choose "what works," so perhaps there's not a specific quote that I can add to my collection.

However, the president's implication that there's some kind of equivalence between capitalism and communism, which both systems having desirable features, is morally offensive. Sort of like saying that we should "choose from what works" in Hitler's national socialism. Here's what we know about the real-world impact of communism.

Communism is a disgusting system that butchered more than 100,000,000 people.

It is a system that leads to starvation and suffering.

So what exactly "works" in that system? If you watch Obama's speech, you'll notice there's not a lot of substance. There is a bit of praise for Cuba's decrepit government-run healthcare system (you can click here, here, and here if you want to learn why the system is horrifying and terrible for ordinary citizens). And he also seems to think it's some sort of achievement that Cuba has schools.

So let's take a closer look at what Cuba actually has to offer. Natalie Morales is a Cuban-American actor, writer, and filmmaker. Here's some of what she wrote about her country and her relatives still trapped on the island.

Every two years, the Cato Institute awards the Milton Friedman Prize for Advancing Liberty to an individual who has made a significant contribution to advancing human freedom. More than anything, past winners have embodied the old adage that the price of liberty is eternal vigilance.

It should therefore be no surprise that Milton Friedman Prize winners continue to show up in the news, pushing for freedom and standing up to power. In recent days, three awardees have appeared in the news because of their unyielding commitment to the principles of individual liberty, limited government, free markets, and peace.

In September, the ruling Communist Party in Beijing announced that the people of Hong Kong, who have enjoyed considerable autonomy since the city’s transition from a British protectorate in 1997, could only vote for electoral candidates that were pre-approved by the Communist Party. Protesters bravely took to the streets and have faced strong-arm tactics from the police, including beatings and pepper spray. Beijing has refused to budge and this week “made its highest-level denunciation yet of the protesters,” reports the New York Times, “accusing them of pursuing a conspiracy to challenge Beijing’s power over the city.”

The authorities in Beijing aren’t satisfied with cracking down on protests in Hong Kong; they are also curtailing freedom on the mainland. Mainland supporters of the protesters are being arrested. And as the Washington Post reported this week, “books by scholars considered supporters of the demonstrations are suddenly becoming harder to find,” as Beijing imposes an apparent ban on material critical of the government.

Mao Yushi, awarded the Milton Friedman Prize in 2012, is one of those scholars. Mr. Yushi is an economist and one of China’s most outspoken activists. In response to the news that his books were being censored by Beijing, Yushi wrote, “A national government organ is daring to risk universal condemnation, in open opposition to the constitution. What is our government actually trying to do?” His internet post was then swiftly deleted by government censors.

Fortunately, Mao Yushi has overcome much worse repression. Under Mao Zedong, Yushi wrote in the Washington Post just weeks before the Hong Kong protests broke out, “I was labeled a ‘rightist’ and persecuted, along with thousands of others. We were removed from our posts and sent to the countryside for ‘re-education.’ I was reduced to the lowest human form, constantly stalked by the nightmare that I could never shake: hunger.”

Read Mao Yushi’s article in the latest issue of The Cato Journal and the corresponding Op-Ed in the Washington Post.

In the early 1980s a church in Leipzig, East Germany’s ­second‐​­largest ­city, began holding “peace prayers” on Monday night. Two young pastors, Christian Führer and Christoph Wonneberger, at the Nikolaikirche, or St. Nicholas Church, led the services. As Andrew Curry wrote in the Wilson Quarterly, it was a dangerous undertaking, but the church was the only place where any dissent could be cautiously expressed. “The church was the one space someone could express themselves,” Führer said. “We had a monopoly on freedom, physically and spiritually.”


Through the 1980s, as Curry reported, the Monday meetings grew. Gorbachev’s reforms gave Eastern Europeans hope. But they knew their history.

In 1953, workers in 700 East German cities declared their opposition to the Unified Socialist Party of Germany, or SED, the party that was synonymous with the East German state, and demanded the reunification of the country. Soviet soldiers fired on demonstrators, and more than 100 were killed. In the years since, all opposition movements in the Soviet bloc had met the same fate: “’53 in Germany, ’56 in Hungary, ’68 in Prague, ’89 in ­China—­that’s how communism dealt with critics,” ­Führer says.

Suddenly in 1989, with a breach in the Iron Curtain between Hungary and Austria, and Solidarity winning an election in Poland, more people started showing up for peace prayers, more than the small church could hold. People started flooding out of the church and marching with candles through Leipzig. Week by week that fall, more people joined the marches — hundreds, then thousands, then 70,000, 150,000, 300,000. And then, unbelievably, the Communist Party fell, the Berlin Wall opened, and East Germans were free after more than 40 years. As a Leipzig politician told me in 2006, “As it says in the Bible, we walked seven times around the inner city, and the wall came down.”


I talked about the Monday prayers and the fall of communism in this 2012 speech:

PRAGUE, CZECH REPUBLIC—The Czech Republic is one of the most successful members of the former Soviet Empire. Yet Czechs with whom I recently spoke fear liberty is in retreat. The former Communist Party might reenter government after elections later this month.

Czechoslovakia was “liberated” by the Red Army at the end of World War II. After the Berlin Wall fell on November 9, 1989, the so-called Velvet Revolution ousted the Czech Communist Party. Czechoslovakia soon adopted wide-ranging free market economic reforms and split into the Czech Republic and Slovakia.

Most dramatically, after the prime minister’s summer resignation President Zeman appointed a leftist government against the wishes of the parliamentary majority. The new cabinet lost a vote of confidence, but remains as caretaker until the upcoming election.

Equally controversial are the president’s policies.  As I wrote in my new Forbes online article:

Moreover, the president reversed course on the EU after appealing to supporters of the Euro-skeptic [former President Vaclav] Klaus during the presidential campaign.  Once in office President Zeman hoisted the EU flag over the Prague Castle, which hosts the presidential office, and signed the European Stability Mechanism, the EU bail-out fund.  He describes himself as a “Euro-Federalist,” advocates common European fiscal, tax, foreign, and defense policies, and supports adopting the Euro as the Czech currency.

The greater worry is the revival of the Communist Party. As memories of Communist repression fade, some Czechs long for the perceived stability of the past.

In a review of five books on the Soviet police state, David Satter notes this prophetic volume:


The year was 1909. Terrorists were murdering not only czarist ministers but provincial officials and police. It was in this atmosphere that “Landmarks” was published in Moscow. The contributors, all of them Russian Orthodox believers, called on the intelligentsia to reject materialist moral relativism and return to religion as a means of grounding the individual. Their essays, with stunning foresight, described all of the characteristics of the coming Soviet state. The religious philosopher Nikolai Berdyaev explained the roots of its contempt for the individual. He said that the revolutionary intelligentsia hungered for a universal theory but was only prepared to accept one that justified their social aspirations. This meant the denial of man’s absolute significance and the total subordination of spiritual values to social goals. Bogdan Kistyakovsky wrote that the intelligentsia’s predilection for formalism and bureaucracy and its faith in the omnipotence of rules were the makings of a police state. A hundred years later these essays are still among the best arguments ever made against revolutionary fanaticism, political “correctness” and the drive to create “heaven on earth.”

Sounds like a book I should have heard of before now.

North Koreans might be impoverished and starving, but Pyongyang has entered the Internet age. Unfortunately, the new leadership isn’t using its skills to make friends.

Thirty-year-old ruler Kim Jong-un has followed his “Great Leader” grandfather and “Dear Leader” father, so some of us call him the “Cute Leader.” But he's not proving to be warm and cuddly---at least toward the United States.

The so-called Democratic People’s Republic of Korea recently posted an animated YouTube video showing Manhattan in flames after a missile attack from an unnamed country. The images are cribbed from the video game Call of Duty and the audio is an instrumental version of Michael Jackson and Lionel Richie's "We Are the World"---so it's not exactly an ILM-quality production. Scrolling across the pictures is Korean text reading, “It appears that the headquarters of evil, which has had a habit of using force and unilateralism and committing wars of aggression, is going up in flames it itself has ignited.”

The DPRK video—removed from YouTube because of copyright violation but still available elsewhere—occasioned hand-wringing and worries that maybe the United States should take the threat seriously. However, the threat is nothing new. Pyongyang previously issued posters showing missiles hitting America’s Capitol Hill.

The North Koreans aren’t the only people to view Washington as the Center of All Evil. However, most of the rest of us, especially here at Cato, don’t view foreign missile attacks as a particularly good solution to political disagreements.