Of the 859,629 refugees admitted from 2001 onwards, only three have been convicted of planning terrorist attacks on targets outside of the United States, and none was successfully carried out.  That is one terrorism-planning conviction for every 286,543 refugees that have been admitted.  To put that in perspective, about 1 in every 22,541 Americans committed murder in 2014.  The terrorist threat from Syrian refugees in the United States is hyperbolically over-exaggerated and we have very little to fear from them because the refugee vetting system is so thorough.

The brutal terrorist attack in France last Friday reignited a debate over accepting refugees from Syria and the Middle East.  A Syrian who applied for asylum could have been one of the attackers, although his passport was a forgery.  (As of this writing, all identified attackers have been French or Belgian nationals.) Governors and presidential candidates have voiced opposition to accepting any Syrian refugees, while several bills in Congress could effectively end the program.

There are many differences between Europe’s vetting of asylum seekers from Syria and how the United States screens refugees.  The geographic distance between the United States and Syria allows our government to better vet those seeking to come here, while large numbers of Syrians who try to go to Europe are less carefully vetted.  A lax security situation there does not imply a lax security situation here.

The Differences between Refugees and Asylum Seekers

Much of the confusion over the security threat posed by refugees is over the term “refugee” itself.  It’s not yet clear how many foreign attackers in Paris entered Europe, but one or more may have entered disguised as asylum seekers.

In the United States, asylum seekers show up at U.S. borders and ask to stay must show they have a well-founded fear of persecution due to their race, religion, nationality, membership in a particular social group, or their political opinion if they return to their country of origin. There is an application and investigation process, and the government often detains the asylum seeker during that process. But the investigation and vetting of the asylum seeker often take place while he is allowed inside of the United States. Many of the Syrians and others who have entered Europe are asylum seekers who are vetted through similar, less stringent security screens.

Refugees are processed from a great distance away and are more thoroughly vetted than asylum seekers as a result.  In the United States, a refugee is somebody who is identified by the United Nations High Commissioner for Refugees (UNHCR) in a refugee camp.  UNHCR does the first round of security checks on the refugee according to international treaties to which the United States is a party and refers some of those who pass the initial checks to the U.S. Refugee Admissions Program (USRAP).  The referrals are then interviewed by a U.S. Citizenship and Immigration Services (USCIS) officer abroad.  The refugee must be outside the United States, be of special humanitarian concern to the government, demonstrate persecution or fear of persecution due to race, religion, nationality, political opinion, or membership in a particular social group, and must not be firmly resettled in another country.

Because the refugee is abroad while the U.S. government checks their background, potential terrorist links, and their claims to refugee status, the vetting is a lot more thorough and can take up to two years for non-Syrians.  For Syrians, the vetting can take about three years because of the heightened concerns over security.

The distinction between asylum seekers and refugees is usually lost when discussing the security threat from refugees.  The father of Boston Marathon bombers Tamerlan and Dzokhar Tsarnaev was granted asylum status, which conferred derivative asylum status on the children.  None of the Tsarnaevs were ever refugees.

Both Tamerlan and Dzokhar were children when they were admitted through their parents' asylum claims.  They did not adopt a radical interpretation of Islam or start plotting a terrorist attack until years after coming here.  Their case does not reveal flaws in the refugee vetting process. There were some other terrorist attacks in the early 1990s from applicants for asylum status, but none of them were actual refugees.

Deputy State Department Spokesman Mark Toner called the security checks for refugees "the most stringent security process for anyone entering the United States." Coming here as a refugee requires numerous security and background checks that are more intense and invasive than for other migrants or visitors – which is partly why refugees have not successfully carried out terrorist attacks on U.S. soil (three have been convicted of attempting to carry out attacks abroad, there was one borderline case from a refugee who entered in 1997, and at least one other for a refugee who entered prior to 2001).

The first step for a refugee is to arrive and register in a UNHCR refugee camp outside of Syria. The UNHCR then refers those who pass the first stage of vetting to the U.S. government refugee process (as described above). The National Counterterrorism Center, the Terrorist Screening Center, the Department of Defense, the FBI, Department of Homeland Security, and the State Department use biometrics and biographical information gleaned through several interviews of the refugee and third-party persons who know him or could know him to make sure applicants really are who they claim to be, to evaluate their security risk, and to investigate whether they are suspected of criminal activity or terrorism.  Numerous medical checks are also performed.  During this entire screening process, which takes about three years for Syrians, the refugee has to wait in the camp. If there is any evidence that the refugee is a security threat, he or she is not allowed to come to the United States.

A refugee from Burundi was detained by DHS for 20 months for materially supporting a terrorist group because rebels beat him up, stole $4 from him, and took his lunch (it’s unclear from the story, but he might have been an asylum seeker).  Many good candidates for resettlement in the United States are turned down for these silly reasons.

How Many Refugees Make It Here?  How Many Are Syrians?

Few ISIS soldiers or other terrorists are going to spend at least three years in a refugee camp for a 0.042 percent chance of entering the United States when almost any other option to do so is easier, cheaper, and quicker.

If the United States still takes in 10,000 Syrian refugees in 2016, and the number of refugees rises to 4.5 million, a mere 0.22 percent of them--one out of every 450--will be resettled in the United States.  That number is still so small and the process so well monitored that potential terrorists are unlikely to see the refugee system as a viable way to enter the United States.

Foreign-born terrorists tend to enter on student visas, tourist visas, business visas, or have asylum applications pending, or are lawful permanent residents. All non-immigrant or immigrant categories face fewer security and background screenings than refugees do.

Let’s assume, for the sake of argument, that individual Syrian refugees are three times as likely to attempt terrorism in the United States than non-Syrian refugees because they are super-radicalized and very good at hiding it while waiting for years in refugee camps for their chance to strike.  Assuming this fantasy is true, the United States can expect to convict a single Syrian refugee for attempting a terrorist attack for every 95,514 of them allowed in as refugees.  There are many more convictions for attempted terrorism than successful terrorist attacks.  Without even attempting to estimate the damage caused by such hypothetical terrorist attacks, it’s clear that the present political panic and calls for a moratorium on refugee admissions from Syria are totally unwarranted.

This situation may be different in Europe, where 681,713 Syrian asylum seekers have sought refuge since the beginning of their civil war in 2011. So far, one of them may have participated in the Paris terrorist attack, and that is far from clear.

John Mueller and Mark G. Stewart have been critical of counterterrorism agencies that “simply identify a source of harm and try to do something about it, rather than systematically thinking about the likely magnitude of harm caused by a successful terrorist attack, the probability of that attack occurring, and the amount of risk reduction that can be expected from counterterrorism efforts.”  These criticisms could easily apply to the U.S. refugee vetting process.  To my knowledge, there has been no systematic evaluation of the costs and benefits of this refugee vetting process.  The marginal costs of outlays and security procedures may exceed the marginal benefits, but that means we have even less to fear from those refugees admitted even if the price we pay for that safety is irrationally high.

There is also a risk from not letting in more Syrian refugees that policymakers should consider.  Syrians could languish in refugee camps for years or decades to come unless the Turkish government suddenly becomes more classically liberal and hands out millions of work permits.  There is one clear lesson from the limited academic literature on this issue: Allowing the current UNHCR refugee camp situation to grow and fester for years can only produce more radicalization and terrorism.  A more expansive refugee policy with adequate security checks that resettles large numbers in safe countries can drain the swamp of potential future terrorists and decrease that risk.

Where the Refugees Are Settling in the United States

The pace of Syrian refugee admissions is scheduled to pick up in 2016 unless Congress prevents it. In October 2015, the government took in 187 Syrian refugees and settled them in several states (Figures 1 and 2). 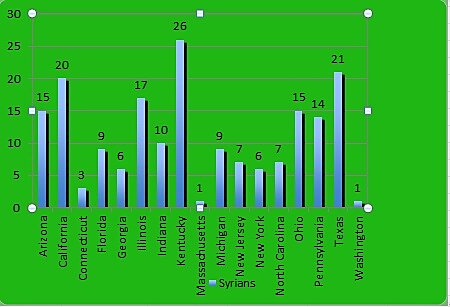 Other Refugees Resettled in States with Syrians October 2015 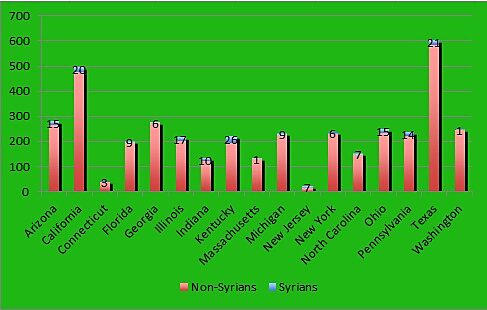 In October 2015, Syrians were approximately 3.6 percent of all refugees admitted, and many states didn’t even receive any (Figure 3).

Syrian and Other Refugees by State 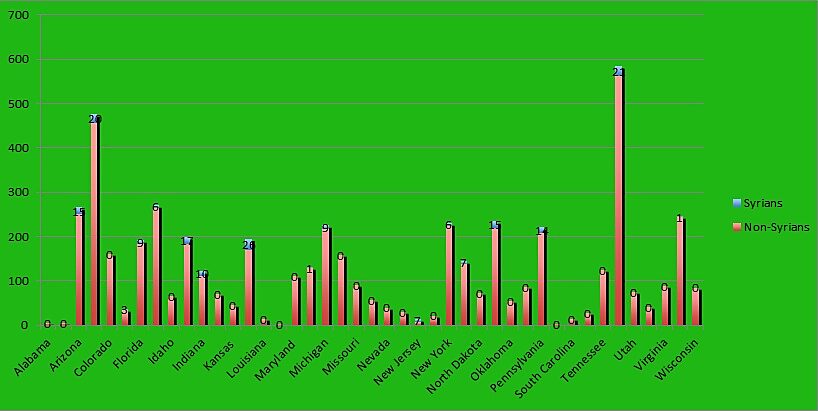 Syrian and Other Refugees Admitted Since 2011 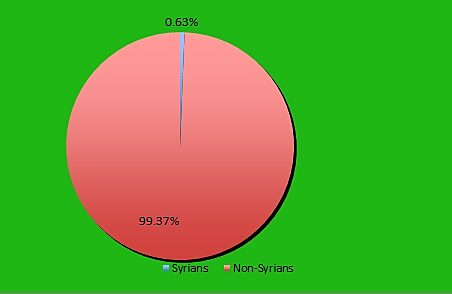 The security threat posed by refugees in the United States is insignificant. Halting America’s processing of refugees due to a terrorist attack in another country that may have had one asylum-seeker as a co-plotter would be an extremely expensive overreaction to very minor threat. Resettling refugees who pass a thorough security check would likely decrease the recruiting pool for future terrorists and decrease the long-run risk.

The current refugee vetting system is multilayered, dynamic, and extremely effective. ISIS fighters or terrorists who are intent on attacking U.S. soil have myriad other options for doing so that are all cheaper, easier, and more likely to succeed than sneaking in through the heavily guarded refugee gate. The low level of current risk does not justify the government slamming that gate shut.