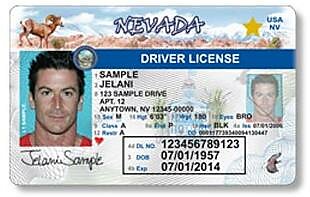 The state of Nevada is one of few that is tripping over itself to comply with the REAL ID Act, the U.S. national ID law.


It’s worth taking a look at the sample license displayed in this news report, especially the gold star used on the license to indicate that it is federally approved.


The reasons for “improving” drivers’ licenses this way are complex. The nominal reason for REAL ID was to secure the country against terrorism. The presence of a gold star signals that this the card bears a correct identity and that watch‐​list checking has ensured the person is not a threat.


Don’t be too thrilled, though. The weakness of watch‐​listing was demonstrated again by the Christmas‐​day attempt on a Northwest airlines flight. The underpants bomber wasn’t listed, so checking his name against a watch‐​list didn’t do anything.


The real reason for REAL ID, though, was anti‐​immigrant fervor. If the driver licensing system distinguished between citizens and non‐​citizens, the theory goes, possession of a driver’s license can be used to regulate access not just to driving, but to working, financial services, health care, and anything else the government wants. Illegal presence in the country could be made unpleasant enough that illegal immigrants would leave.


Alas, human behavior isn’t that simple. If ‘driven’ to it—(I had to…)—people will get behind the wheel without licenses—and without the training that comes with licensing. Then they’ll crash. When the governor of New York briefly de‐​linked driver licensing and immigration status in 2007, he cited public safety and the likelihood that insurance rates would fall, to the benefit of New Yorkers. (When the state of New Mexico de‐​linked driver licensing and immigration status, uninsured vehicle rates in the state dropped from 33 percent to 17 percent.) But the governor suffered withering criticism from anti‐​immigrant groups and quickly reversed course.

REAL ID transfers well‐​being and wealth from individuals to the state.


But let’s return to this gold star…


The article says that the Nevada ID is becoming one of the hardest in the country to forge. But it’s hard to be sure. The gold star may undermine the anti‐​forgery goal.


Watch for the people who check licenses to fall into the habit of checking the gold star and taking that as evidence that the document is “good.” By a small but relevant margin, ID checkers will forget to compare the picture on the license to the face of the person presenting it. (Gold star? Go.) Putting a gold star on the license may make forgery easier. It’s not about the technical feasibility of creating the card; it’s how to fool people.


But this gold star. It will be taken as a shorthand for “citizen.” There are examples from the past in which governments used symbols to assign status to populations. It’s easy to go overboard with such comparisons, but the Nevada license, with this gold star, takes a dramatic step toward carving the population into groups—groups that can be divided. Maybe soon two stars will be for military veterans, or people licensed to own firearms. Three stars could be for elected officials.


With this gold star system, a Nevada license‐​holder is a little less of a free, independent person with rights and privileges based on individual merit. A Nevadan becomes an undifferentiated status‐​holding subject. We’re a long way from the day when the “gold star” people are assigned to better rail cars, but the idea is that it should never happen. We should reject entirely the tools that could allow the government to do that.