Swan Song from a “Reluctant” Hawk 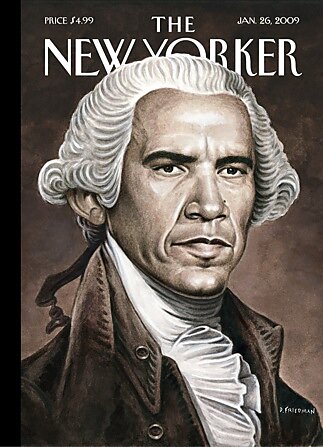 President Obama will deliver his Farewell Address tonight to a capacity crowd in Chicago’s McCormick Place convention center. It’s the right venue for the speech, the president explained last week, because Chicago is “where my career in public service began.”


Indeed, it’s the city where, as a young state senator in 2002, Obama gave an antiwar rally speech railing against the “dumb,” “rash” rush to war in Iraq; and where, as a presidential candidate five years later, he promised to “turn the page on the imperial presidency” and usher in “a new dawn of peace.” And yet, 2008’s “peace candidate” will leave office as the first two‐​term president in American history to have been at war every day of his presidency, having dropped over 25,000 bombs on seven countries in 2016 alone.


Given that record, it seems unlikely that Obama will use his Farewell Address to warn against excessive foreign entanglements or the dangers of the military‐​industrial complex. But you never know: our 44th president has never lacked chutzpah. In a speech to US troops last month, he denounced the “false promise” that “we can eliminate terrorism by dropping more bombs,” and piously proclaimed that “democracies should not operate in a state of permanently authorized war.”


An audacious statement—given that it is Obama himself who’s made perpetual warfare the new normal, and the president the ultimate “decider” in matters of war and peace. Where George W. Bush secured congressional authorization for the two major wars he fought, Obama has launched two undeclared wars (in Libya and against ISIS), ordered 10 times as many drone strikes as his predecessor, and this summer bombed six different countries just over Labor Day weekend. And it is Obama who is largely responsible for warping the 2001 Authorization for the Use of Military Force—passed three days after 9/11 to target Al Qaeda and the Taliban—into an enabling act for endless war, anywhere in the world.


Through it all, Obama has maintained the pose of a “reluctant warrior,” repeatedly lecturing the country about the dangers of an imperial presidency while forging new frontiers in the expansion of executive power. “Unless we discipline our thinking, our definitions, our actions,” he chided in May 2013, “we may be drawn into more wars we don’t need to fight, or continue to grant Presidents unbound powers.” In the same speech, Obama even had the gall to quote James Madison’s admonition that “no nation could preserve its freedom in the midst of continual warfare.”

Two weeks after Obama invoked Madison’s warning, the public got new evidence of its continued relevance. June 2013 brought the first of a series of revelations about secret dragnet data‐​collection programs that targeted Americans in the name of protecting them from terrorism. In the quest to “collect it all,” the National Security Agency had built what NSA whistleblower Edward Snowden termed a “turnkey tyranny.” As former NSA counsel Susan Hennessy has observed: “No one should kid themselves about the idea that in the wrong hands, [the agency] couldn’t do quite a bit that’s very scary.”


With Trump’s inauguration near, Obama has described the transfer of presidential power as ”a relay race” where he’ll pass the baton to his successor. In private, he’s occasionally used a more ominous metaphor: leaving “a loaded weapon” behind for the next president. In 10 days Obama will pass that weapon on to Donald J. Trump, a man he’s flatly declared “unfit” for the office—someone who can’t be trusted with a Twitter account, let alone the nuclear launch codes.


So it’s only fair that on Obama’s recent “legacy tour,” he’s faced some awkward questions about the vast new powers he’s forged. Not to worry, Obama told NPR’s Steve Inskeep recently, your president has been hard at work building “guard rails internally…. a whole series of processes to guard against government overreach, to reform some practices that I thought over time would threaten civil liberties.” But those self‐​imposed restraints won’t bind President Trump—they don’t even bind President Obama, who’s also spent his last months in office adding new fronts and targeting new enemies in the “Forever War.”


In keeping with the Washington‐​Eisenhower tradition, the outgoing president plans to offer some “admonitions” in his address tonight. He’s already used Madison’s warning about “continual warfare,” but if he’s looking for something equally prescient, Obama might try one of the lesser‐​known passages from Washington’s Farewell Address. In it, our first president warned of “the disorders and miseries [that] gradually incline the minds of men to seek security and repose in the absolute power of an individual,” with the result that “sooner or later the chief of some prevailing faction… turns this disposition to the purposes of his own elevation on the ruins of public liberty.”