The 2010 Patient Protection and Affordable Care Act, also known as Obamacare, may perhaps be the most contentious and polarizing law we've seen enacted in the past several decades. For seven years, Democrats have remained convinced they like it and Republicans confident that they don't.

But once we get past the partisanship and polarization, what do Democrats and Republicans think about the fundamental regulations that constitute the core of Obamacare? These core regulations include pre-existing conditions rules that require insurance companies cover anyone who applies (guaranteed issue) and charge people the same rates regardless of pre-existing conditions (community rating).

All government policies and their ostensible benefits come with a price. What are Americans willing to pay?

As I’ve previously written, the Cato Institute 2017 Health Care Survey found that while Americans initially support core Obamacare regulations of community rating and guaranteed issue, support plummets if such regulations harm access to high quality medical services, require higher premiums or higher taxes. That being said, Americans appear to care more about their access to high quality medical services than they care about higher taxes, higher premiums, or universal coverage for those with pre-existing conditions.

Democrats are unique, however. They are the only group who says they’d be willing to pay more if it guaranteed coverage to those with pre-existing conditions. Six in 10 Democrats say they’d be willing to personally pay higher taxes and 58% say they’d pay higher premiums so that insurance companies wouldn’t charge people higher rates based on pre-existing conditions (community rating). Similar shares say they'd pay higher taxes (60%) and premiums (51%) so that insurance companies would cover anyone who applies (guaranteed issue).

Yet, the survey found that Democrats turn against the core regulations in Obamacare if they threaten their access to medical services and treatments, limit their access to top hospitals and surgeons, or require them wait several months to see a specialist.

Indeed, 62% of Democrats would oppose regulations that ban insurance companies from charging higher rates to people based on pre-existing conditions if it limited their access to medical tests and treatments. Similarly, 65%  of Democrats would oppose the community rating rule if it required they wait several months before getting in to see a specialist for medically necessary care. And 54% would oppose if it limited their access to top rated medical facilities.

Similarly, two-thirds of Democrats would oppose regulations requiring insurance companies cover anyone who applies if these harmed the quality of health care in the US. 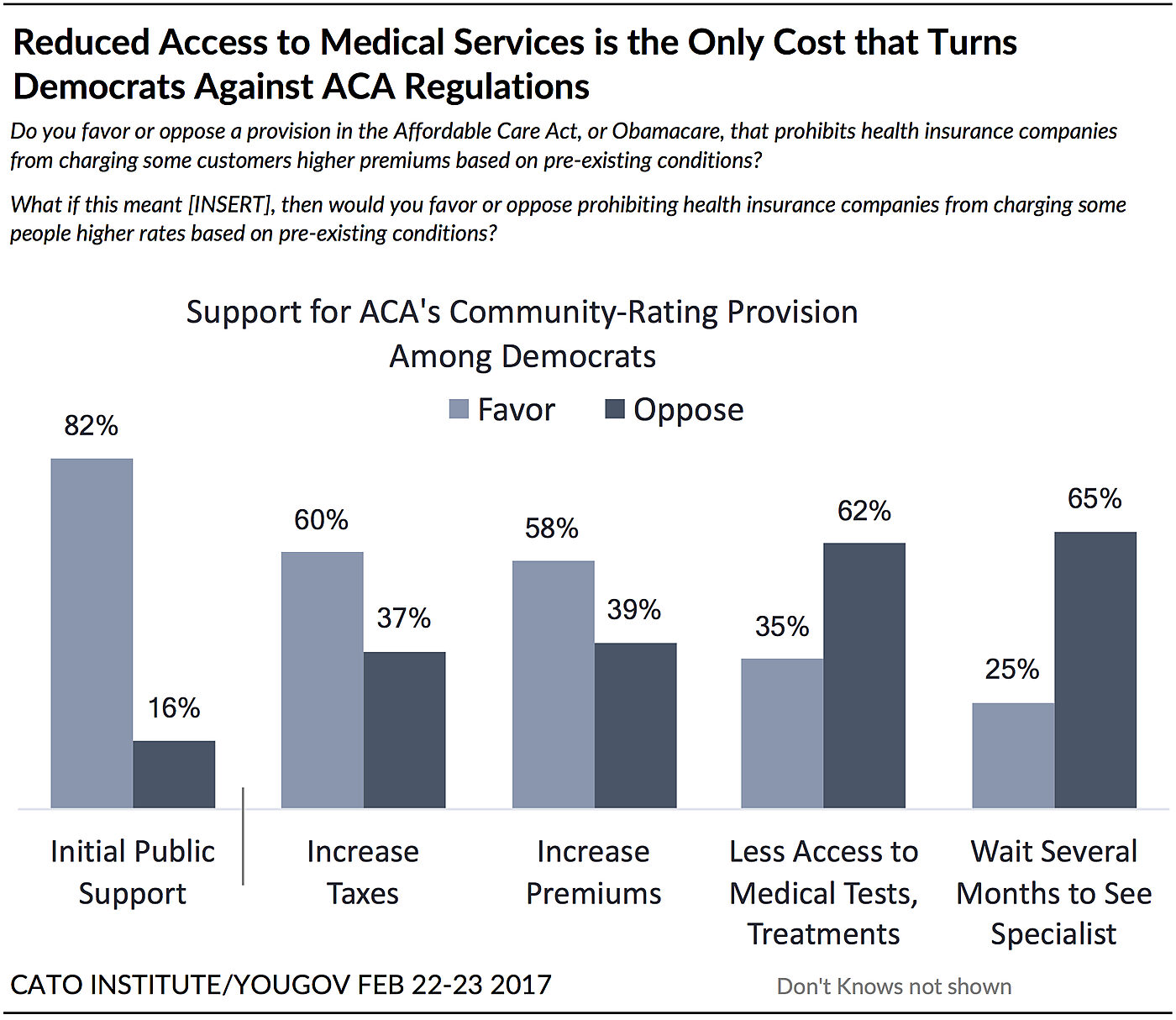 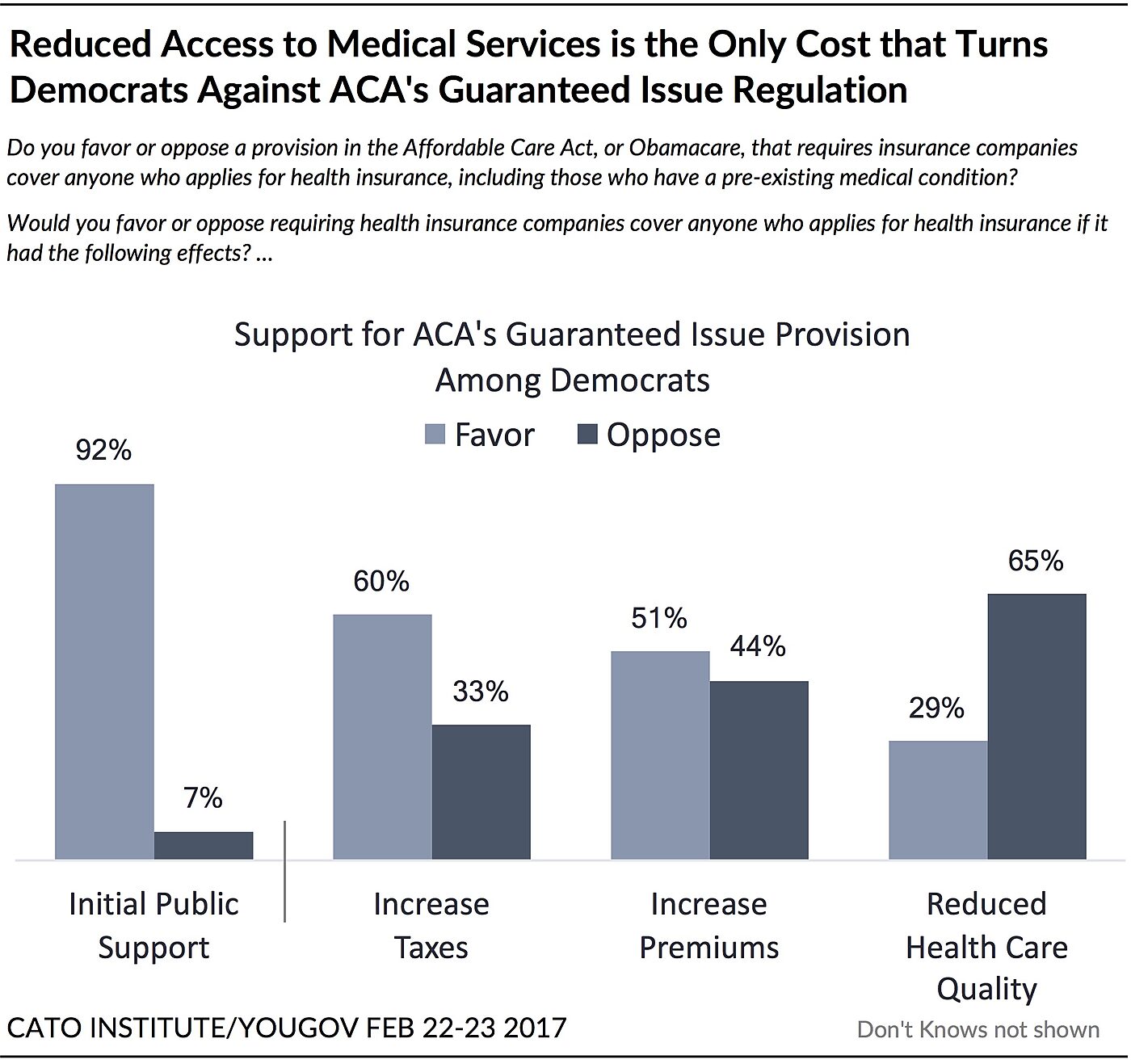 Why should we care about these results? Academic research examining the impact of these regulations find that they do come with significant costs to the quality of health care—limiting access in the exchanges to top hospitals and surgeons and to medical services and treatments that people need.

Moreover, threats to the quality of health care constitute the one cost that Americans of all partisan persuasions would be unwilling to accept.

This doesn't mean Americans would oppose other methods to help those with pre-existing conditions obtain the health care they need. Instead, they may support other policies that achieve this goal so long as they don't come at the expense of quality in the U.S. health care system, raise premiums or hike taxes.

For too long, the national dialogue has focused almost exclusively on the cost versus coverage debate. This misses a third and incredibly important dimension that is a top priority of the American public: health care quality in the United States. Health care regulations and proposed reforms must be assessed not only according to their impact on cost and coverage, but also their impact on Americans’ access to timely high-quality medical care.