The latest working paper in the ongoing Social Security Programs and Retirement Around the World project asks whether older people are healthy enough to work more years, and finds that there is a significant amount additional work capacity due to health and mortality gains. While piecemeal reforms like increasing the retirement age or changing how benefits are indexed are not as comprehensive as allowing young workers to invest a portion in personal accounts, they could be part of some comprehensive package to address the program’s shortfall. In a recent AP/NORC poll, 85 percent of respondents said protecting the future of Social Security is extremely or very important, but under current law, the Congressional Budget Office projects the trust fund will be exhausted by 2029 and benefits the following year would need to be cut by 29 percent. Delaying the needed reforms only increases the magnitude of changes that will be needed.  Increases in life expectancy and the additional capacity for work at older ages should be considered when designing those reforms.

In the report, the authors use a few different methods and find that in each scenario, due to gains in health and life expectancy, older people are able to work significantly more than they currently do. In the Milligan-Wise (MW) method, the authors estimate additional work capacity by comparing employment rates for men in 2010 with men at the age with the same mortality rates from previous years. For all age groups, older men have significantly more work capacity, as much as 42 percent for men between ages 65 and 69, for example.

In the Cutler et al. (CMR) method, the authors estimate a relationship between employment and health for people between 50 and 54, and then combine this estimation with actual health for older age groups. With this method, they also find significant additional work capacity: 31.4 percent for men between ages 65 and 69, and even more for the older age group. 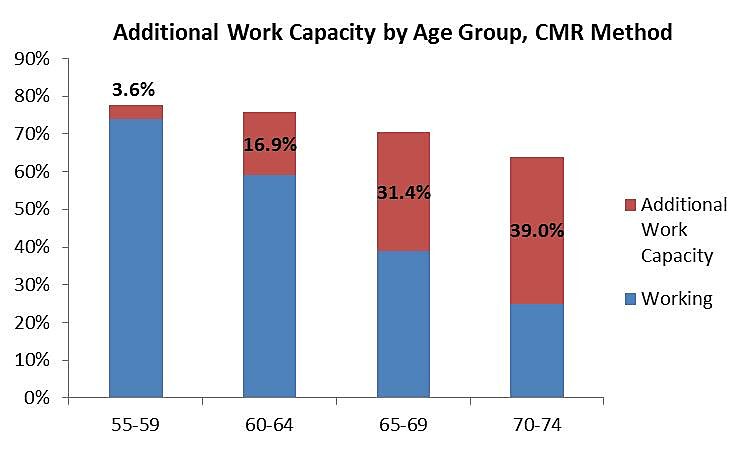 While older Americans have more work capacity overall, if the health status of people with lower-educational attainment hasn’t seen any improvement, it’s possible that they would have difficulty working additional years. To examine this question, the authors look at Self-Assessed Health (SAH) and find significant reductions in the percent of men responding that they were in poor or fair health across all education quartiles. The quartile with the lowest educational attainment saw a 22 percent improvement, and the second education quartile enjoyed an almost 44 percent improvement. Older Americans have seen significant gains in self-assessed health across all levels of education. While this is admittedly just one subjective metric, taken with the other findings of the paper, it suggest that older Americans have the capacity to work more than they do now.

Increasing the retirement age is one option to begin to address the program’s shortfall, although a better reform would allow younger workers to choose to divert some of their payroll taxes into some form of personal accounts. Without significant changes, Social Security will be unable to pay all scheduled benefits long before today’s young workers get close to retirement age. Absent reform, this shortfall will require significant tax increases or benefit cuts, and it only gets worse the longer policymakers delay. Due to welcome gains in life expectancy and other health improvements, older Americans can work more, and this should be considered when crafting reform proposals.