The chart shows estimated fiscal 2017 and 2019 outlays on the EITC, child credit, and American Opportunity Tax Credit (AOTC). The 2019 figure includes a $12.6 billion increase from the GOP tax bill, as estimated by the Joint Committee on Taxation in endnote 2 in here. (I’ve excluded the ACA piece).


Outlays on refundable credits or subsidies will jump from $85.1 billion in 2017 to an estimated $97.7 billion in 2019. This amount is not a “tax cut.” Rather, it represents taxes extracted from other workers and businesses, having all the usual negative effects. 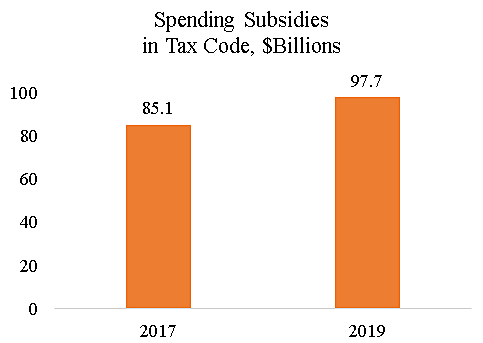 See here for a critique of the EITC.


Current law spending on the EITC, child credit, and AOTC in the budget (Table 26–1).