A recent report from the Social Security Advisory Board’s Technical Panel found that the 75-year shortfall could be 28 percent (roughly $2.6 trillion) larger than the estimate in this year’s Trustees Report due to changes in some of the underlying technical assumptions. This disparity is more the product of the difficulties related to projecting the trajectory of a program as large and complicated as Social Security so far into the future, with the chair of the Technical Panel taking pains to reiterate that “the methods and assumptions used by the Social Security actuaries and Trustees are reasonable.” Even so, the report reveals the uncertainty related to the long-term projections for Social Security, with relatively small changes to some of the underlying assumptions significantly changing the program’s financial solvency outlook. Social Security is the largest government program in the world, and changes in its fiscal outlook could have a large impact on the government’s overall finances.

The changes in the Technical Panel report that would have the largest impact are concentrated in a few variables:

Other changes to inflation and real earnings growth rate assumptions have a small negative impact, while changes to immigration assumptions slightly improve the program’s financial picture.  Some of the changes reflect developments that are good overall but have a negative impact on Social Security’s finances, like higher life expectancy. 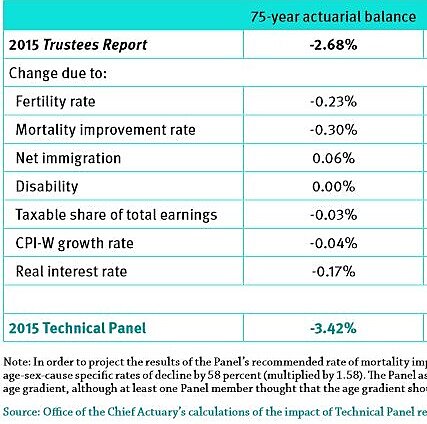 Some of the panel’s recommendations focus on making the methodology of the Trustees’ Report more transparent and the degree of uncertainty more clear.  While it’s possible that unforeseen changes to underlying variables like the fertility rate could improve the program’s financial outlook, it is much more likely that the trillions in unfunded obligations published in the Annual Trustees’ Report understate the shortfall, if anything.

To some extent we don’t know what Social Security’s long-run shortfall is, but we do know that there will have to be significant reforms to make the program solvent, and the longer these changes are delayed the bigger they’ll need to be. Whether it is raising payroll tax rates or cutting benefits, delaying reform only makes the needed changes more severe.

Source: Social Security Administration, The 2015 Annual Report of the Board of Trustees of the Federal Old-Age and Survivors Insurance and Federal Disability Insurance Trust Funds, July 2015, p. 25.

One of the goals Social Security is to remove some degree of uncertainty related to life in old age, but this new report confirms that a high degree of uncertainty remains, both for the program’s overall solvency and for individual workers. Younger workers already get a worse deal than previous generations due to demographic change and the program’s structure. Even more troubling, they can’t know how much worse their deal will become as benefits are cut or taxes are increased in the future to try to address this shortfall.

One option that could remedy some of these inherent problems would be to allow workers, especially young workers, to divert some of their payroll taxes to individual accounts. Cato has explored this issue in the past. Chile, for example, has an elderly extreme poverty rate of 1.6 percent, and pension funds have seen a real annual return of 8.6 percent from 1981 to 2013. The United States should heed some of these lessons. Other countries, especially those in South America, have successfully introduced reforms along these lines.