The American Public Transportation Association (APTA) has issued its annual press release trumpeting the growth in transit ridership. Naturally, it selectively uses the data in order to get the best media attention.

For example, it claims that 2014 ridership set a record, which is true only if you don't count any year between 1912 and 1957, during all of which transit carried far more people than it does today with almost no subsidies. Transit carried just under 10.8 billion trips in 2014, an increase of 101 million trips over 2013 but less than the 11.0 billion trips carried in 1956 (which doesn't even include commuter rail and several other forms of transit that APTA counts today).

Second, APTA fails to note that all of the growth in ridership can be accounted for by increased usage of the New York City subway system. While national ridership grew by 101 million trips, APTA's own ridership report shows that New York subway ridership grew by 107 million trips, or nearly 6 million more than the national gain. Without New York subways, whose ridership grew because of New York City's rapid job growth, APTA would have had to report a national decline in ridership. Transit ridership grew in some cities, but it declined in many others, including Albuquerque, Austin, Charlotte, Chicago, Cincinnati, Honolulu, Los Angeles, Miami, Nashville, Norfolk, Pittsburgh, Sacramento, San Antonio, San Francisco (Muni), San Jose, and St. Louis, to name a few.

Most importantly, APTA fails to note that, in order increase transit ridership, subsidies to transit have grown to truly record levels. We don't have all the data from 2014 yet, but transit subsidies exceeded $42 billion, or more than $4 per transit trip, in 2013. This is a staggering amount considering the industry was profitable overall before Congress began subsidizing transit in 1965 and subsidies remained relatively small until recent years. 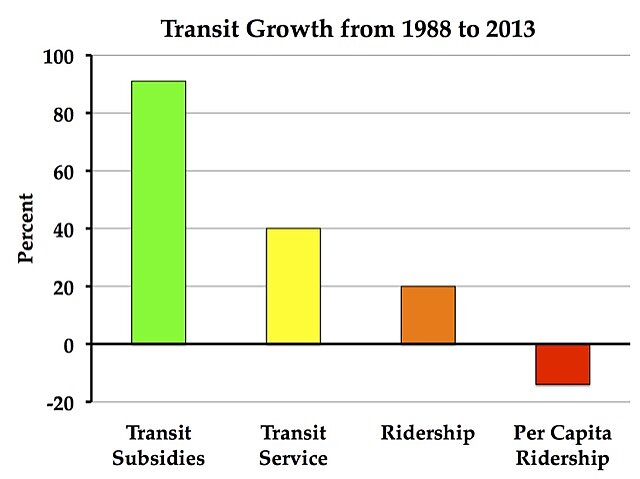 APTA's historic data shows capital subsidies only as far back as 1988. In the 25 years between 1988 and 2013, total inflation-adjusted subsidies grew by more than 90 percent, with the subsidy per transit trip growing from $2.12 to $4.08. In return for these subsidies, transit service (measured in vehicle miles) grew by 40 percent, while ridership grew by just 20 percent. Worse, America's urban population grew by 40 percent, so per capita transit ridership shrank by 14 percent from 47 to 41 trips per urban resident per year.

I compare 2013 numbers with 1988 because that's as far back as the data go. Transit advocates, however, like to compare with 1995, a year in which the transit industry bottomed out due to low gasoline prices. Things look better when compared with that year, but not by much. Since 1995, inflation-adjusted subsidies have grown nearly twice as fast as ridership: a 64 percent increase in subsidies compared with a 34 percent increase in ridership. Per capita ridership grew by just 7 percent.

Thanks to APTA's hard work, American taxpayers are spending more and more on transit, but not getting much back. APTA would like Congress to believe that funneling more tax dollars to transit agencies will increase transit ridership and be good for cities. In fact, the data show that transit ridership is much more heavily influenced by fuel prices than by subsidies.

The problem with transit subsidies is that the subsidies go where they do the most political good, not where transit riders need them. Transit systems in Boston, Washington, and other cities are falling apart due to lack of maintenance. Rather than repair the systems, politicians are spending billions of dollars on new rail transit lines--the Silver Line in DC; the Green Line extension to Medford in Boston--that the transit agencies can't afford to maintain. The result is a disaster for transit riders and taxpayers alike.