The Brookings Institution released a new study today on charter schooling---assessing how well it's working and what the federal government should do about it. One of the recommendations reads as follows:

Student participation in lotteries for admissions to any public [charter] school and the results of such lotteries should be a required student data element in state or district longitudinal data systems supported with federal funds.

Why? Because it would make it a lot easier to measure relative school quality, by permitting more widespread use of randomized, control group experiments. Experiments are certainly great from a researcher's standpoint, but mandating that schools must admit students on a random basis has a catch: 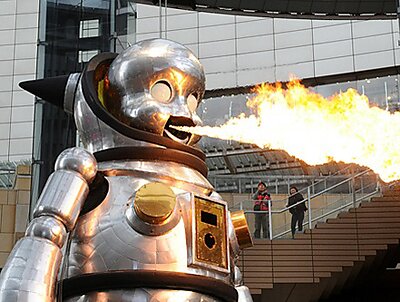 an observer effect as subtle as an 80-foot fire-breathing robot. One of the reasons markets work is that exchanges are mutually voluntary, and producers and consumers don't enter into an exchange unless each perceives it to be beneficial. If you eliminate the mutually voluntary character of an exchange in the process of trying to observe how beneficial it is to one of the parties, you're affecting the very thing you're trying to measure. It becomes more likely that you will have students assigned to schools that are not well equipped to serve their particular needs, injuring such students' educational prospects.

Lottery admission to oversubscribed charter schools appeals to people's desire for fairness, but a much better solution is to adopt a true market approach to education in which oversubscribed schools have not only the freedom but the incentives to expand as demand increases. For-profit enterprises, schools among them, do not generally ignore rising demand for their services. Kumon, the for-profit tutoring service, does not turn students away when it reaches capacity at a given location, it grows that location or opens a new one. As a result, it now serves about four million students in 42 countries.

Rather than figuring out how to ration good schools, why don't we just unleash the market forces that will grow and replicate them?