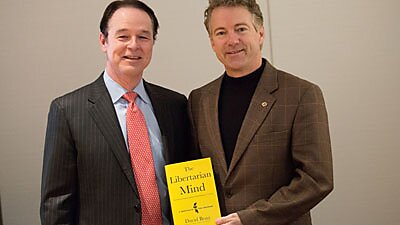 As Sen. Rand Paul announces his presidential candidacy, I’ve been talking about it in the media. At the Daily Beast, I write about his chances:

The Republican base may be divided into establishment, tea party, Christian right, and libertarian wings. Paul starts out with a strong base in the libertarian wing, which gave his father, Rep. Ron Paul, 21 percent of the Iowa caucus vote and 23 percent of the New Hampshire primary in 2012. With his strong opposition to taxes and spending and his book “The Tea Party Goes to Washington,” he’s also well positioned for the tea party vote. His pro‐​life views will make him acceptable to religious conservatives as the field narrows.


The wild card may be who can attract voters who don’t usually vote in Republican primaries. Paul’s stands on military intervention, marijuana, criminal justice reform, and the surveillance state give him a good shot at getting independents and young people to come out for him.…


After the 2012 election Los Angeles Times columnist James Rainey wrote that the country is mildly “left on social issues and right on economics…. a center‐​libertarian nation.”


No other candidate is trying to appeal directly to that center‐​libertarian vote. That’s the big new idea that Rand Paul will test.

At Newsweek (no longer part of the same company as the Daily Beast!) I write about Paul’s libertarianish views:

He told a Harvard audience that he’s “libertarian‐​ish” and wants “a libertarian influence in the Republican Party.” He told Sean Hannity on Fox that he’s happy to be called “either libertarian conservative or constitutional conservative.”…

His recent comments on gay marriage—“personally offended” and “moral crisis”—created a libertarian backlash. Unlike Paul, most libertarians support abortion rights. But voters for whom abortion and gay marriage are deal‐​breakers aren’t likely to be voting in Republican primaries.

Many libertarian activists have vociferously objected to Paul’s foreign policy moves. His endorsement of U.S. airstrikes against the Islamic State (ISIS), his signing Senator Tom Cotton’s letter aimed at derailing negotiations with Iran and his endorsement of a $190 billion increase in Pentagon spending (with cuts in other spending to pay for it) reinforced his libertarian opposition.

But conservative writer Michael Brendan Dougherty says libertarians should understand that Paul is “inching” the GOP in his direction: “Paul often offers rhetorical hostility instead of sanctions, sanctions instead of conflict and limited constitutionally authorized conflict instead of open‐​ended war.” Sort of a Fabian approach to non‐​interventionism.…

Paul doesn’t claim to be a libertarian, and he takes positions that many libertarians disagree with. But on a broad range of issues, from spending and regulation to government spying, drug wars and military intervention, he has a more libertarian policy agenda than any major candidate in memory.

I told Mara Liasson at NPR something similar:

“I think Rand Paul is the most libertarian major presidential candidate that I can remember seeing,” said Boaz, whose new book is called The Libertarian Mind, “so it tells you that there is a constituency that wants this more libertarian approach.”

Al‐​Jazeera did a nice summary of a point I made:

Boaz too said that Rand Paul’s candidacy represents an inflection point for the libertarian movement, with an increasing number of voters attracted to a political philosophy that is skeptical of Big Government in the wake of Wall Street bailouts, the Iraq War and the abuses of the NSA. Paul’s campaign will test how far libertarian ideas can go in the Republican Party.