Private schools start behind the eight ball no matter what the economic conditions because they are competing against public institutions that get massive subsidies from taxpayers and are free from the perspective of consumers.

It is, of course, extremely difficult to compete against “free” because you have to not only be worth the price you charge, but also roughly the amount of spending going to the “free” option. With public schools on average spending $15,424 per student as of the 2016–17 school year (the latest with available federal data) that is tough.

That competition becomes even more daunting when economic times are hard and families have less money for everything. During such times public schools see reductions in their funding—in the 2008-09 academic year public schools spent $15,377 in 2018 dollars, which dropped to $14,077 in 2012–13—but they rarely face extinction. Not so private schools.

How have recent recessions looked?

July 1990 to March 1991 saw the Gulf War Recession, which was relatively mild—a 1.5% GDP decline—and as seen below, private school enrollment dipped between 1993 and 1995, maybe as an after effect of the recession, maybe not. In the chart below that, you can see the private share of enrollment fell during the recession. Unfortunately, we have poor data on school closures for that period because the federal government changed how it counts private schools after 1990. 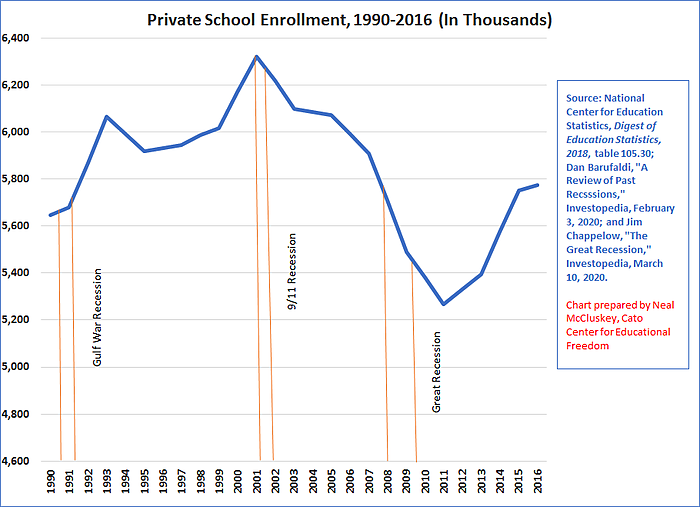 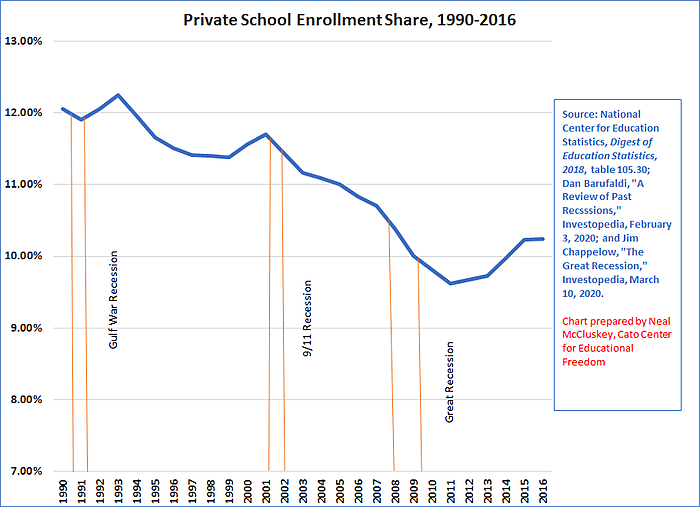 From March 2001 to November 2001, we experienced the 9/11 Recession, though it perhaps had more to do with problems such as the bursting of the Dotcom bubble than the 9/11 attacks. It, too, was mild, with a 0.3% GDP decline. But a very long period of falling private school enrollment began in 2001.

Public school enrollment changes over time, too. Was declining private enrollment between 2001 and 2011 just a function of drops in the overall school‐​aged population? No. The private share of K-12 students fell from a 2001 peak of 11.7 percent to just 9.6 percent in 2011 – a big drop. The private share has only clawed back over the 10 percent mark in very recent years.

Of course, other things have happened since 2001, including the Catholic clergy abuse scandal. And the loss of students has been most visible in Catholic schools. But that is not the only private segment to lose students—it happened across private school types between 2001 and 2011.

If the COVID-19 recession is as bad as some fear—possibly even a depression—it could spell doom for thousands of private schools, institutions that furnish a crucial form of education: something different from what public schools provide. It can be different pedagogy. Different rules. Religious education. If we lose private schools, we lose the schooling sector that furnishes the education most important for a diverse—and truly equal—society: education serving people who lack the political power to make government schools teach what they want.

Recognizing the threat to pluralistic education posed by the economic destruction of COVID-19, education analyst Derrell Bradford recently called for all schools—traditional public, charter, and private—to be included equally in any government relief that may be coming down the pike. While the specifics of such relief will need to be heavily scrutinized, the general principle is spot‐​on: relief should in no way be restricted to public schools, since all schools have been ordered closed and all will suffer the consequences of an economic downturn.

In addition to government aid—and maybe primarily—hopefully philanthropists and charitable organizations will look to help private schools. Many such schools serve far‐​from‐​rich students—21 percent of private schoolers are from “poor” or “near poor” families—and they often furnish important social capital to their communities. It is natural to worry about public schools because they enroll the large majority of kids, but a basic reason they have such a huge share is the same reason they may not need as much philanthropic help: they get taxpayer funding no matter what.

Recessions are not kind to anyone, and it is easy to forget about America’s relatively small private K-12 sector. But that sector is essential to American pluralism, and already suffers from a serious handicap: having to compete against a “free” government monopoly. Private schooling must not be allowed to die.