American companies are hindered by what is arguably the world’s most punitive corporate tax system. The federal corporate rate is 35 percent, which climbs to more than 39 percent when you add state corporate taxes. Among developed nations, only Japan is in the same ballpark, and that country is hardly a role model of economic dynamism.


But the tax rate is just one piece of the puzzle. It’s also critically important to look at the government’s definition of taxable income. If there are lots of corrupt loopholes — such as ethanol — that enable some income to escape taxation, then the “effective” tax rate might be rather modest.


On the other hand, if the government forces companies to overstate their income with policies such as worldwide taxation and depreciation, then the statutory tax rate understates the actual tax burden. 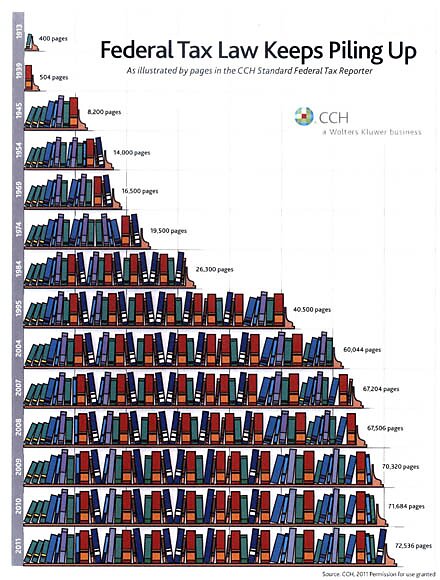 The U.S. tax system, as the chart suggests, is riddled with both types of provisions.


This information is important because there are good and not‐​so‐​good ways of lowering tax rates as part of corporate tax reform. If politicians decide to “pay for” lower rates by eliminating loopholes, that creates a win‐​win situation for the economy since the penalty on productive behavior is reduced and a tax preference that distorts economic choices is removed.


But if politicians “pay for” the lower rates by expanding the second layer of tax on U.S. companies competing in foreign markets or by changing depreciation rules to make firms pretend that investment expenditures are actually net income, then the reform is nothing but a re‐​shuffling of the deck chairs on the Titanic.


This doesn’t mean the proposal would be a step in the wrong direction. There are some loopholes, properly understood, that are scaled back.


But when you add up all the pieces, it is largely a kiss‐​your‐​sister package. Some companies would come out ahead and others would lose.


Unfortunately, that’s not enough to measurably improve incomes for American workers. In a competitive global economy, where even Europe’s welfare states recognize reality and have lowered their corporate tax rates, on average, to 23 percent, the President’s proposal at best is a tiny step in the right direction.