The One Statistic Climate Catastrophists Don’t Want You to Know

Alex Epstein's long-anticipated book, The Moral Case for Fossil Fuels, published by Penguin, comes out today! I reviewed it as, "simply the best popular-market book about climate, environmental policy, and energy that I have read.  Laymen and experts alike will be boggled by Epstein's clarity."

Alex recently sent us a brief essay based upon material in the book. Alex Epstein is President and Founder of the Center for Industrial Progress—an organization sowing the seeds of energy enthusiasm to counter the tide of climate alarmism. We asked Alex to share a few thoughts with our readers here at Cato; find them below.

If you are in Washington, you might want to meet Alex. He will be giving a Hill Briefing in B-369 Rayburn at 9am on Friday, November 21.


If you ever get asked the vague but morally-charged question “Do you believe in climate change?” someone is trying to put something over on you.

Climate change is a constant of nature and everyone agrees that fossil fuels have some impact on our naturally variable, volatile, and often vicious climate.

The question is whether it will have a catastrophic impact—one so bad it justifies restricting the only practical way to get energy in the foreseeable future to the 3 billion people who have next to none of it: fossil fuels. (No country relies on the sun and wind for energy, but rich countries can afford to pay tens or hundreds of billions to install and accommodate allegedly virtuous wind turbines and solar panels on their grids.)

No, it’s not showing temperatures have gone up half a degree in the 80 years we’ve used a lot of fossil fuels, which is barely more than they went up the prior 80 years. Nor does it show temperatures have flattened in the past eighteen years—while  the world’s leading climate catastrophists predicted dramatic, accelerating, runaway warming. Dr. James Hansen predicted that temperatures would increase between two-and-a-half and five degrees in 20 years!

Okay, I’ll show that graph, too—here it is: 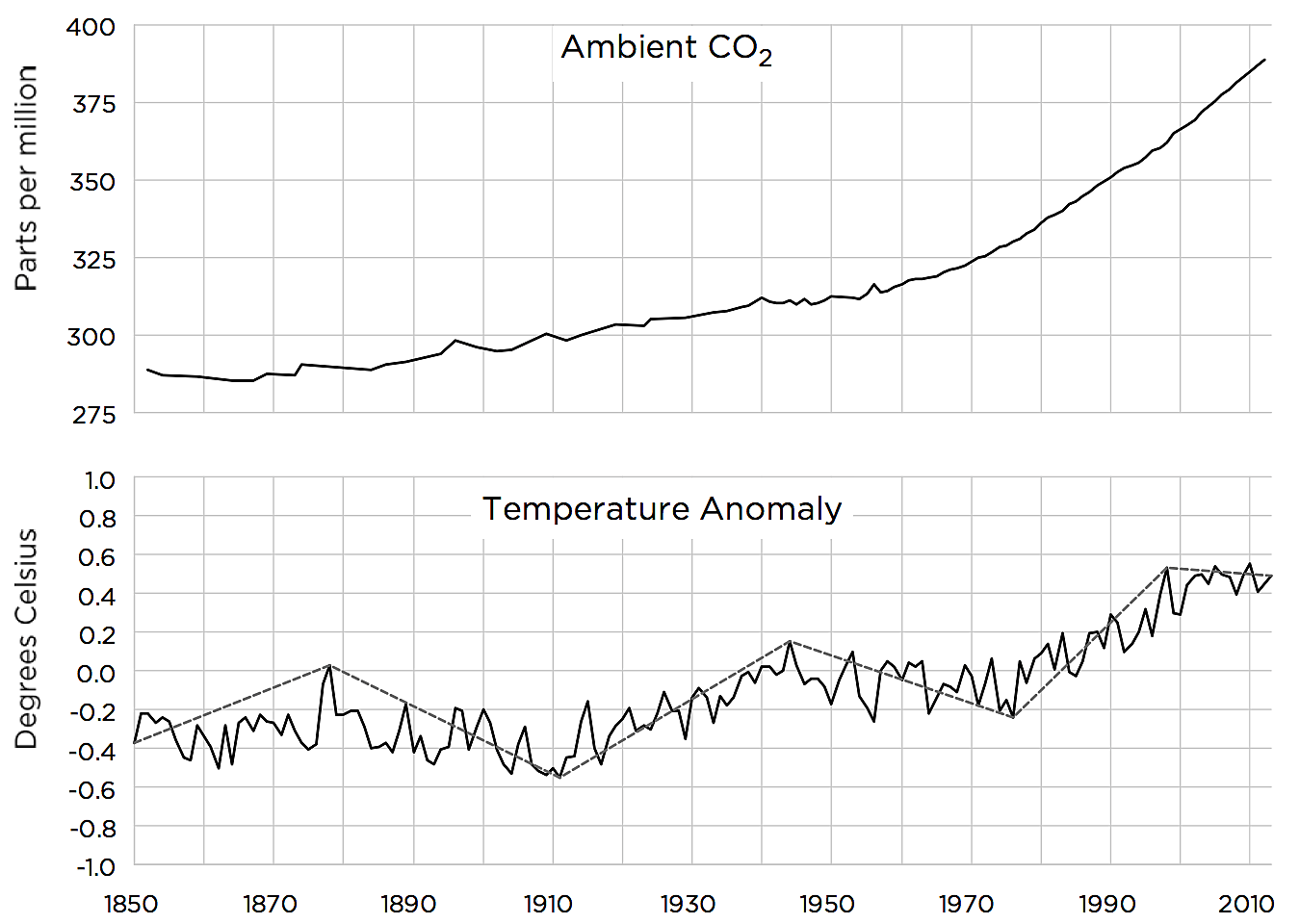 But that’s not the graph that really matters. There is no intrinsically perfect global temperature and, if there was, we would expect it to be warmer. Until it became politically correct for temperature trends to warm, people around the world prayed for far more warming than we’ve experienced. There is no time in human history when it has been considered “too warm” for human beings.

What matters is: is the climate becoming more or less livable? The key statistic here, one that is unfortunately almost never mentioned, is “climate-related deaths.”

The best source I have found for this data is the U.S. Office of Foreign Disaster Assistance and Centre for Research on the Epidemiology of Disasters International Disaster Database (OFDA/CRED EM-DAT), based in Brussels.1 It gathers data about disasters since 1900. 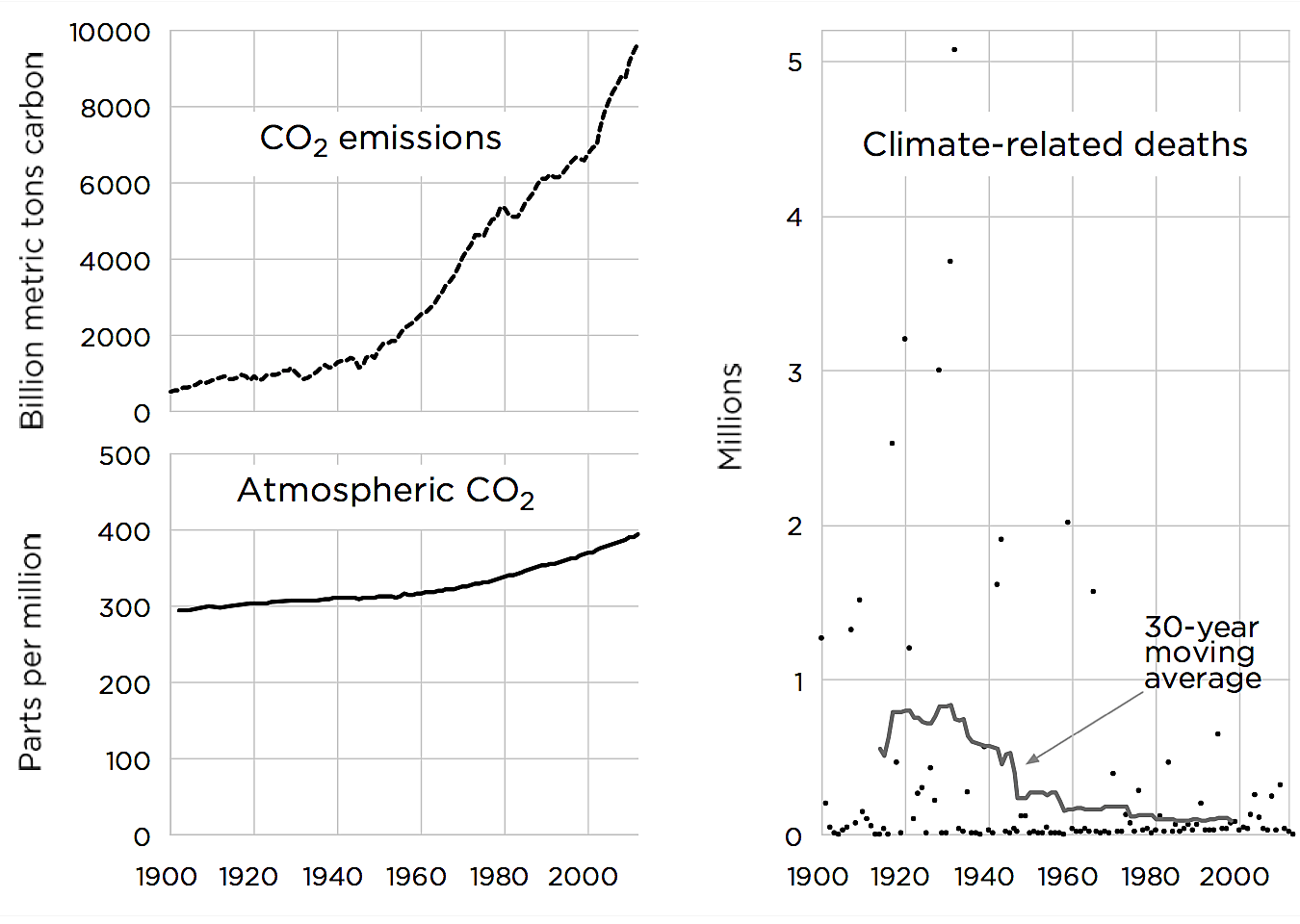 To make matters better, in reality the trend is even more dramatically downward, as before the 1970s many disasters went unreported. One big reason for this was lack of satellite data—we can now see the whole world, enabling us to track icecaps and disaster areas with relative ease. In 1950, if there was a disaster in the middle of what is now Bangladesh, would information have been accurately collected? In general, we can expect in more recent years, more deaths were recorded and in earlier years, fewer deaths were recorded. For some countries there is simply no good data, because in underdeveloped places like Haiti or Ethiopia we do not even know exactly how many people lived in a particular place before a disaster struck. Today we have much better information—and because disaster statistics are tied to aid, there is incentive to overreport.

And the more we dig into the data, the stronger the correlations get.

Here are a couple of striking numbers from the data: in the decade from 2004 to 2013, worldwide climate-related deaths (including droughts, floods, extreme temperatures, wildfires, and storms) plummeted to a level 88.6 percent below that of the peak decade, 1930 to 1939.2 The year 2013, with 29,404 reported deaths, had 99.4 percent fewer climate-related deaths than the historic record year of 1932, which had 5,073,283 reported deaths for the same category.3

That reduction occurred despite more complete reporting, an incentive to declare greater damage to gain more aid, and a massively growing population, particularly in vulnerable places like coastal areas, in recent times.

The climate catastrophists don’t want you to know this because it reveals how fundamentally flawed their viewpoint is. They treat the global climate system as a stable and safe place we make volatile and dangerous. In fact, the global climate system is naturally volatile and dangerous—we make it livable through development and technology—development and technology powered by the only form of cheap, reliable, scalable reliable energy that can make climate livable for 7 billion people.

As the climate-related death data show, there are some major benefits—namely, the power of fossil-fueled machines to build a durable civilization highly resilient to extreme heat, extreme cold, floods, storms, and so on. Why weren’t those mentioned in the discussion when we talked about storms like Sandy and Irene, even though anyone going through those storms was far more protected from them than he or she would have been a century ago?

I have debated representatives of the three leading environmental organizations in the world—Greenpeace, Sierra Club and 350.org—including 350.org’s Bill McKibben, the leading environmentalist in the world today—and every time, I have repeatedly mentioned the climate livability statistics. I raised it to Bill McKibben before I debated him and half a dozen times during my debate with him—he didn’t acknowledge it. He just called it “one number.” Yeah, one number, based on billions of empirical observations, that destroys billions of dollars worth of speculation.

Why? Because the dogma that man is ruining the planet rather than improving it is a religion, a source of prestige, and a career for too many people. But for the rest of us, the statistic climate catastrophists don’t want us to know is very, very good news.