The White House is hinting that its fiscal year 2011 budget due out in February will be “austere.” White House Press Secretary Robert Gibbs didn’t provide any specifics but recently said that “it will not look as it has in the past.” Well that’s a relief because the FY2010 appropriations process finally wrapped up and spending continues to be anything but austere.


The “minibus” appropriations bill signed by the President last week jacked up funding by a combined 8 percent for programs ranging from education to housing to transportation. And that’s at a time when inflation is low. Further, funding hasn’t been passed yet for the president’s recently announced troop surge in Afghanistan, which will cost around $40 billion per year.


President Obama will be probably be announcing in his new budget a FY2010 deficit that’s even larger than FY2009’s massive $1.4 trillion deficit. He’s blowing the bank on his stimulus bill, giant health care bill, and large increase in FY2010 appropriations. He’s also looking at the polls, which show his plunging popularity and rising concerns over federal spending and debt.


He’s got to pretend to introduce an “austere” budget for his political survival and the political survival of Democrats up for election next year. That’s why I’m wondering whether the Democrats are purposely jacking up FY2010 spending so high so that they can show a freeze or even “cuts” for FY2011. 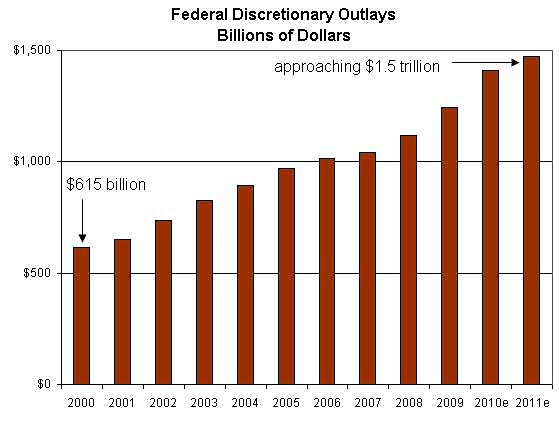