There’s a significant debate now taking place in Washington — largely behind closed doors, but sometimes covered by the media — on whether fiscal conservatives should maintain a rigid no‐​tax‐​increase position. One side of the debate features Grover Norquist of Americans for Tax Reform, which is the organization that maintains the no‐​tax‐​increase pledge. The other side features Sen. Tom Coburn of Oklahoma, who is part of a small group of GOP senators who might be willing to increase the tax burden as part of a deal that supposedly reduces deficits.


I’m a huge fan of Senator Coburn, who was in favor of cutting wasteful spending before it became fashionable. His office, for instance, releases a “Pork Report” every couple of days. You shouldn’t read it if you have high blood pressure, because it will confirm (and reconfirm, and reconfirm, ad nauseum) your worst fears about tax dollars getting wasted.


Nonetheless, I’m on Grover’s side on this tax debate, for two reasons.


First, we have a spending problem, not a revenue problem or a deficit/​debt problem. Red ink is undesirable, to be sure, but it is a symptom of the underlying problem of a government that is too big and spending too much.


But don’t believe me. Here is a chart from the House Budget Committee showing long‐​run projections for spending and revenues over the next 70 years. As you can see, the long‐​run fiscal shortfall is completely caused by higher spending. In other words, 100 percent of red ink is due to government spending. So why put taxes on the table? 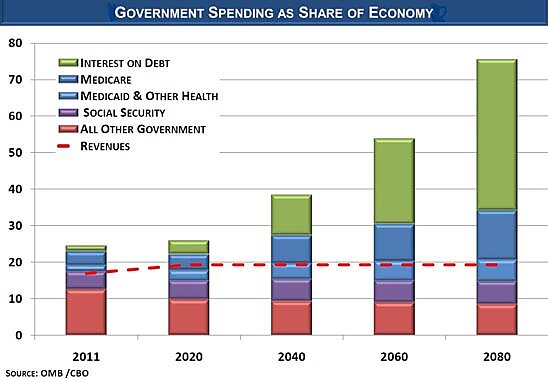 But this chart actually understates the case against tax increases. It uses revenue numbers from the Congressional Budget Office’s “alternative” forecast, which shows taxes steady at 19.3 percent of GDP. That’s more than the historical average of about 18 percent of GDP, which surely indicates that revenues are not the problem.


However, that 19.3 percent estimate is completely artificial. As CBO states in its long‐​run forecast, “the alternative fiscal scenario also incorporates unspecified changes in tax law that would keep revenues constant as a share of GDP after 2020.”


I’ll actually be delighted if we can permanently keep federal revenues below 20 percent of GDP, but I’m not overly optimistic about that because the tax burden is projected to automatically increase over time. And I’m not talking about the expiration of the Bush tax cuts or the broadening of the alternative minimum tax. Yes, those factors would push up tax revenues (at least based on static revenue estimates), but the tax burden also is expected to climb because even modest economic growth slowly but surely pushes more and more people into higher tax brackets.


This second chart shows CBO’s estimate of personal income tax revenue based on current policy (as opposed to estimates based on current law, which includes already‐​legislated tax hikes). To be more specific, it shows how much revenue the government will collect from the individual income tax even if the 2001 and 2003 tax cuts are made permanent and the AMT is indexed. 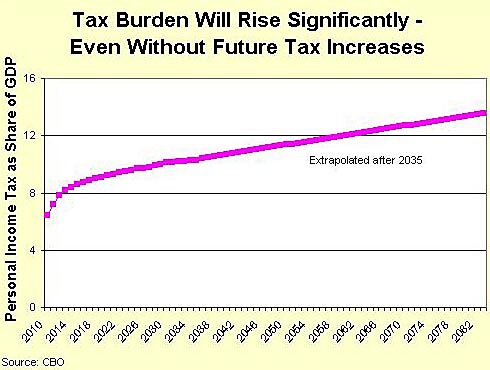 As you can see, the aggregate individual income tax burden will increase by roughly 5 percentage points of GDP when compared to the long‐​run average of about 8 percent of GDP (the CBO estimate only goes to 2035, so I extrapolated to show the same time period as the first chart). And remember, this is the forecast of what will happen to income tax revenues even if politicians don’t impose any new laws to coercively extract more revenue.


This might not be too bad if other taxes were falling, but that’s not what CBO is projecting. As such, this big increase in revenue from the individual income tax means that the overall tax burden will climb by approximately the same amount.


In other words, revenue likely will rise close to 25 percent of GDP as we approach the next century. So if we use this more realistic baseline, we can say that more than 100 percent of the long‐​run deficit problem is because spending is out of control.


The second reason for a firm no‐​tax‐​increase position is that higher taxes are a very ineffective way of reducing budget deficits. Indeed, tax increases generally backfire and lead to more red ink. To understand why, it’s important to put away the calculator and instead consider the real world of politics and public policy. For instance:

The real‐​world evidence certainly points in this direction. We’ve seen “bipartisan budget summits” several times in Washington, and the result is more spending rather than lower deficits. Americans for Tax Reform has a good analysis of what happened after the two big budget summits in 1982 and 1990, but I think the problem is best captured by my adaptation of a famous Peanuts cartoon strip.

Every year, if my aging memory is correct, Lucy would ask Charlie Brown if he wanted to kick the football. At first, Charlie was skeptical. But Lucy always managed to trick him into giving it a try. And the inevitable result was Charlie Brown lying on his back wondering why he had been so foolish.


In the Washington version of this cartoon, Democrats hypnotize gullible Republicans with ostensibly sincere promises of future spending restraint. Republicans eventually acquiesce, naively assuming that Democrats will be their new BFFs in the fight against big government.


Needless to say, that’s not the way the story ends.


Ronald Reagan is reported to have said that the 1982 tax increase was the “biggest mistake” of his presidency. And since Congress never followed through on commitments to reduce spending by $3 for every $1 of higher taxes, he wryly remarked that “I’m still waiting on those three dollars of spending cuts I was promised from Congress.”


Like Reagan, Coburn wants to do the right thing. But good intentions are not the same as good policy. America’s fiscal challenge is too much spending. Government is too big and it is wasting too much money. Taking more money from the American people is not the way to solve that problem.