No, Mr. President, American Steel Protectionism Hasn’t “Worked” in the Past

Today, President Trump hosted several members of Congress to discuss his possible plans for imposing new restrictions on steel and aluminum imports under “Section 232” of US trade law. Amidst that discussion comes this nugget, via Politico Pro[$] (emphasis mine):

"The effect was it raised the price of almost all steel in the United States," leading to job losses in the auto-parts sector and among other manufacturers, Alexander said. "There are ten times as many people in the steel-using industry than steel-making."

Trump shrugged off the complaint. "It didn't work for Bush, but it worked for others," he said. It was not clear, based on a pool report of the closed-door conversation, whether he explained that point.

I guess it was good of the President to acknowledge the widely-known costs that the Bush Administration’s 2002 steel safeguards imposed on American consumers and companies.  However, the President is sorely mistaken to assume that other instances of US steel protectionism turned out much better.  Indeed, as I wrote in my 2017 paper on the historical failures of American protectionism, the US steel industry has for decades gone to the government trough for new restrictions on its foreign competition, and the results these import measures are always the same: immense consumer costs and very few, if any benefits to the industry and its workers.

For example, multiple academic studies in the 1980s showed that efforts to restrict imports of various steel products annually cost American consumers between $200,000 and $2.3 million (2017 Dollars) for every US steel industry job protected: 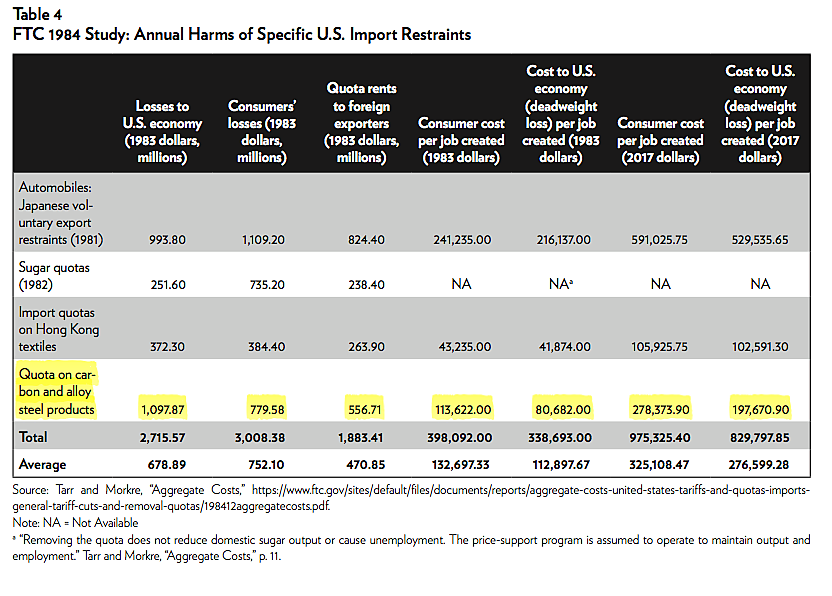 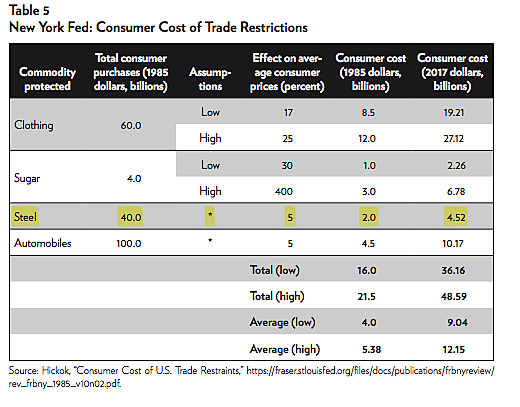 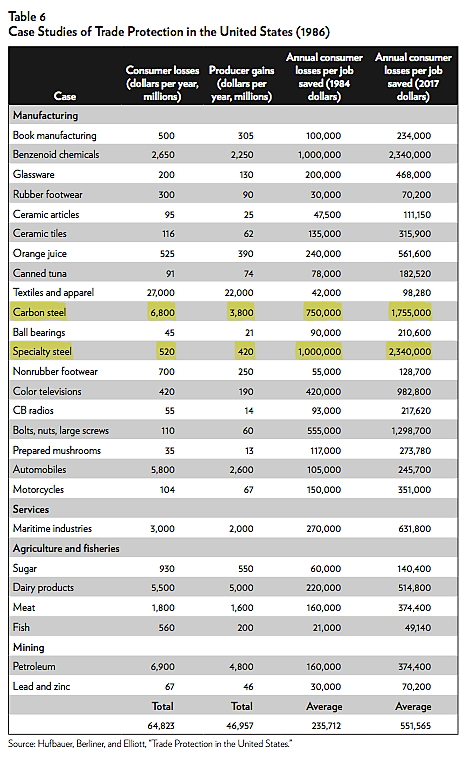 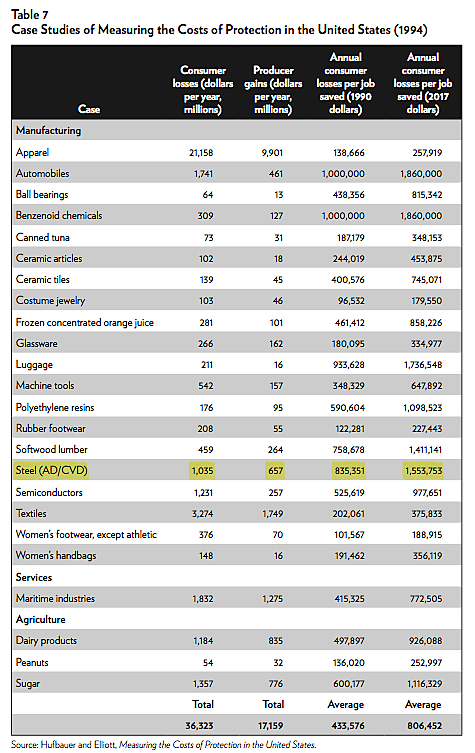 These and other steel imports restrictions also didn’t fix the US steel industry or save its workers (emphasis mine):

A 1986 report from the CBO considered the effects of trade protection in revitalizing domestic firms in four cases— textiles and apparel, steel, footwear, and automobiles—between the 1950s and 1970s. The authors found that, indeed, U.S. trade barriers limited imports and increased protected firms’ output, employment, and profits above what they would have been without protection. However, “[i]n none of the cases studied was protection sufficient to revitalize the affected industry.” The steel, footwear, and textile and apparel industries repeatedly sought new import protection after their previous protection expired, and the automobile industry succumbed to imports of the small cars that were the source of their “competitive difficulties.” Furthermore, the protection did not significantly increase the companies’ incentive to invest in cost-saving technologies that would improve their long-term competitiveness— even when the protected companies had the capital available to make such investments. The authors concluded that, because the system of trade restraints was unable to save protected industries, the U.S. government should consider policies other than import protection—such as encouraging investment in less labor intensive industries, aiding displaced workers, or ending “special treatment for trade-impacted industries”—when crafting new U.S. trade policies.

In 1986, Robert Lawrence and Paula DeMasi examined the effect of escape clause relief (tariffs, quotas, or “orderly marketing arrangements”) on 16 U.S. manufacturing industries [including steel], representing nearly all industries that secured such protection between 1950 and 1983. The results were damning: only 1 of the 16 industries—again, the bicycle industry—expanded after the protection lapsed, 11 contracted, and the remaining 4 were inconclusive at the time. Furthermore, 8 of the 12 industries whose “temporary” escape clause relief had expired actually went back to the government for more protection.

A 1987 study from Robert Crandall on “The Effects of U.S. Trade Protection for Autos and Steel” found that this protection limited imports but actually harmed the industries’ long-term position. For example, it discouraged improvements in product quality and encouraged cannibalistic overinvestment and too-rich labor contracts that “simply postpone[d] part of the necessary adjustment to the loss of competitiveness.” As a result, Crandall concluded, “The experience with the auto and steel industries raises serious questions about the effectiveness of quotas as a means to revitalize an industry.”

The results of American steel protectionism in the 1990s and 2000s were no different: more American consumer pain and no industrial revival (emphasis, again, mine).

No U.S. industry has benefited more from protection than the steel industry. In the 1990s and early 2000s, for example, approximately 150 steel antidumping orders were in place, covering almost 80 percent of all steel imports during the period. … As with other bouts of protectionism, the costs of these actions were massive, while gains were minimal. Estimates of the economic costs of U.S. trade remedy protection against steel imports range from approximately $60 million per year to well over $2.7 billion—or $450,000 per job saved in 2001 ($596,000 in 2017 dollars). And given that U.S. steel-consuming industries employ between 40 and 60 workers for every 1 steelworker, every job allegedly saved in the steel industry was far outnumbered by job losses in steel-using industries….

[D]espite decades of protection and billions of dollars in government subsidies, Barfield noted in 2003 that “the U.S. steel industry has dramatically shrunk, with employment down by two-thirds . . . capitalization only one tenth its former valuation,” and 12 different bankruptcies between 1998 and 2000 alone. These exact same dynamics continue today: As of October 2016, 90 191 of 373 antidumping and countervailing duty orders in place were on iron and steel products. Yet the industry continued to clamor for more import protection and government assistance. Both points testify to the duties’ failures (and the steel industry’s political connections).

The steel industry, of course, is not alone.  In fact, as shown in my paper and the many academic studies cited therein, the poor results above are indicative of the vast majority of cases of American protectionism.  It just doesn’t work.

Maybe it’s time the President and his advisers stop “shrugging off” this simple fact.

The views expressed herein are those of Scott Lincicome alone and do not necessarily reflect the views of his employers.